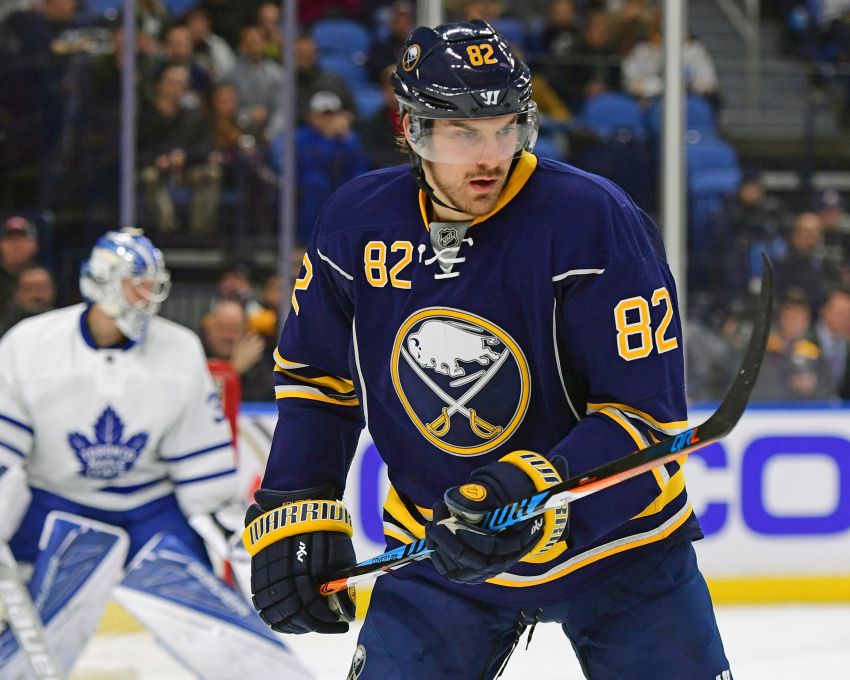 OTTAWA – There’s no obvious nickname for the trio of Marcus Foligno, Johan Larsson and captain Brian Gionta, the Buffalo Sabres’ most consistent and sturdiest line in years.

The first letters of their names don’t form a witty acronym. They don’t have a common background.

“I heard someone call us ‘Deuces’ because we all got 2 in our number,” Foligno said Friday after the Sabres prepared for tonight’s tilt against the Senators. “The ‘Deuce Line.’ I don’t know.”

That nickname works on multiple levels. Based on ice time, responsibility and production, it’s Buffalo’s No. 2 line. The checking line is often charged with shadowing the opponent’s top scorers.

Foligno scored the only goal in Thursday’s 2-1 loss to Toronto, a game in which the trio effectively shut down young star Auston Matthews, the first overall pick. All three players played at least 17 minutes.

Larsson, the center, converted Gionta’s pass for the late go-ahead goal in Tuesday’s 2-1 win in Minnesota, his second winner in three days. Gionta, the right winger, scored the eventual winner in Sunday’s 3-1 win in Winnipeg.

“For the most part, they’re playing against other teams’ top lines, a checking role,” Sabres coach Dan Bylsma said. “But when you look at our chances against and chances for, they’re minimizing the chances against but they’re also getting a good portion of our offense.”

Considering how well the trio played after it was formed in the winter, the contributions aren’t surprising. By now, the players know each other’s tendencies.

“This is the most consistent line I’ve ever played on,” Foligno said inside KeyBank Center. “It’s easy to get along with those guys out there with the chemistry we have. It’s simple. We’re always talking. We’re always communicating. I think that’s why we’ve been together for so long.”

Gionta believes Foligno hadn’t grasped how strong and powerful he can play.

“He finished strong last year,” Gionta said. “He kind of came into his own. … So now that he’s starting to realize he can dominate some people with his size and strength, you see him taking off to a different level.”

Stability has helped buoy Gionta at an age when most players are retired. He switched lines regularly during his first two seasons as the team was rebuilt.

“We have a familiarity with our line being able to play last year together,” Gionta said. “If you look back the previous two years, we’ve been juggling lines a little bit coming into it. You never get too comfortable or stay with somebody long enough to find their tendencies.”

This is the final season of Gionta’s three-year, $12.75 million contract. How long would he like to play?

“I feel good,” said the 15-year veteran, who will play his 935th NHL game tonight. “I want to continue playing. I feel great. The body’s holding up good.”

Foligno said he can’t see the smooth-skating Gionta “slowing down.”

“I want to be a player that helps him get another contract,” Foligno said. “You look at him, he’s a player that’s in great shape. He’s good for us. He’s a good guy. He’s fun to play with. He’s a good player still. I hope that he has many more years.”