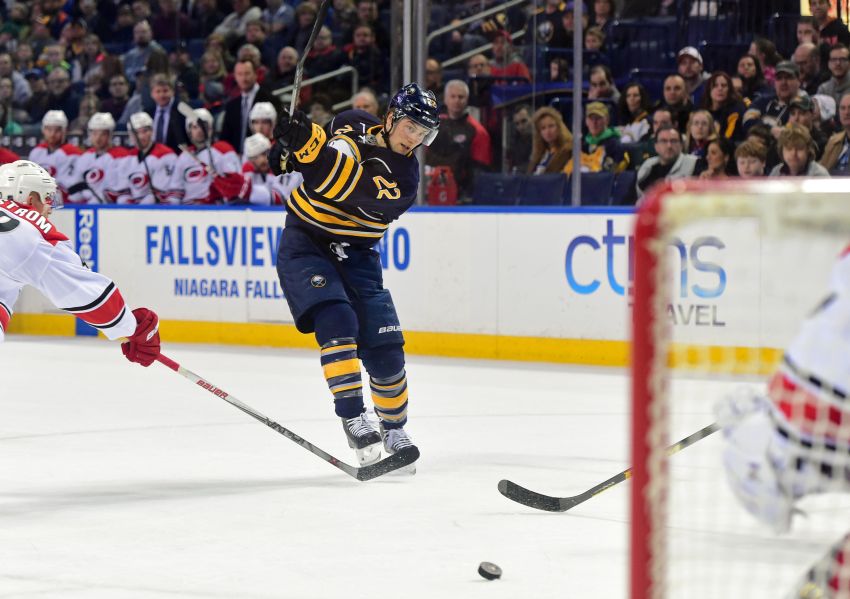 BUFFALO – The Sabres’ most consistent and sturdiest line in years – yes, years – is a trio comprised of players who underachieved, struggled offensively and couldn’t stay in the lineup earlier this season.

While the line’s technically the Sabres’ third – the players usually face the opponent’s best in a checking role – it has  created offense and scored timely goals since coach Dan Bylsma put it together in the winter.

“Our line has been doing a lot of damage,” Foligno said Friday inside the First Niagara Center after the Sabres prepared for tonight’s road tilt against the New York Rangers.

On a team that has only recently regained some stability following two dreadful seasons, having a line that has generated some sustained success is huge.

Bylsma, of course, is known for constantly juggling – he recently moved winger Evander Kane off a thriving No. 1 line – but the trio has played so well he’s left it intact and will probably utilize it again next season.

Larsson has been thriving in the role of a tenacious pest “playing with a bit of a growl,” Bylsma said. The 6-foot-3, 223-pound Foligno has finally developed into a bullish presence on a nightly basis. Gionta, the team’s captain and graybeard at 37 years old, skates like a man 10 years younger.

“That’s what you’re looking for in your third line … a line that can take some pressure off the top couple lines to play against their big lines at home, but you’re also pinching in offensively,” Gionta said. “I think that’s what we try to do.”

They do that by showcasing some strong chemistry. By now, after playing together so long, they know each other’s tendencies.

“I felt (Thursday) we had some quick, almost tic-tac-toe plays where we knew where each other were,” Foligno said. “It starts in practice and goes into games. Playing with each other for so long now, it’s kind of just a habit. We’re knowing where each other are. It’s the chemistry we were building.”

In Thursday’s 4-1 home win against Toronto, Bylsma said the line was “dominant” in the offensive zone.

“It’s all three of those guys playing together,” he said.

Bylsma has been harping on Larsson to shoot more. When the Swede scored, Bylsma’s mind immediately flashed back to some early-season practices.

Larsson, who has 91 shots on goal in 71 games, said: “I want to shoot more. We talked about it the whole season.”

Larsson, 23, was scratched occasionally earlier this season. He didn’t score his first goal until Dec. 14, his 28th appearance. He has seven goals and nine points in his last 17 games.

But even if Larsson doesn’t score, his presence is known “almost every game,” Bylsma said.

“He’s matched up against the other team’s good lines, good players, and they know he’s there,” he said. “They’re dealing with a pretty angry guy in the middle of the ice.”

“(He’s playing) his best and most consistent hockey, playing with an edge, playing physical, playing (like) a big-bodied guy who can skate,” he said. “He’s just tough to handle when he’s playing with that speed.”

Foligno, who also sat earlier this season, has scored seven of his 10 goals in the last 27 games.

Gionta struggled early on after suffering a lower-body injury late in training camp. The Greece native didn’t score until Dec. 7, his 25th game.

“I don’t think he was at where he can be at with his skating,” Bylsma said. “I thought it was reflective a little bit in his play, and I don’t know how old he is right now, but he’s certainly able to skate.”

Gionta eventually settled in and became a calming, veteran influence beside Larsson and Foligno.

“Over the course of the last 35 games, you see the consistency of the line and those guys’ play, and a lot of that, I think, would be attributed to Brian and his presence, his leadership and just how he plays as a consistent force for that line,” Bylsma said.