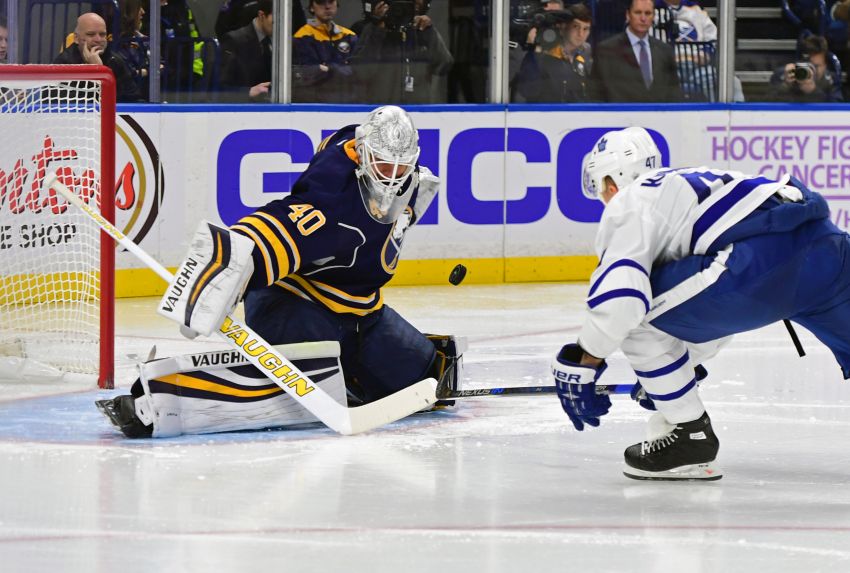 BUFFALO – With just under 12 minutes left and Toronto clinging to a one-goal lead, the Sabres, as they consistently did throughout Thursday’s 2-1 loss, pumped a string of shots on Maple Leafs goalie Frederik Andersen in close.

After Andersen denied Sam Reinhart, Tyler Ennis backhanded a shot on net, grabbed his own rebound and released a quick wrist shot through traffic from the slot.

When Andersen’s quick left glove hand snared the puck, Ennis, who rarely showcases much emotion, looked up and yelled out in frustration.

“There was such a scramble in front, and I can’t imagine that he saw it,” Ennis said after the Sabres’ three-game winning streak ended. “It ended up in his glove.”

Andersen gave the Sabres fits all night. They pumped a season-high 43 shots on goal, yet only Marcus Foligno’s second-period backhander in close beat the Dane.

Incredibly, the Leafs ended a seven-game losing streak at KeyBank Center, winning their first game since a 4-3 overtime victory Jan. 29, 2013, a 1,373-day drought. The Sabres are 17-2-1 in their last 20 home games against Toronto.

“Give credit to (Andersen), he played really well and made some diving stops and ridiculous saves,” Foligno said. “He was definitely the reason they came out of here with two points.”

Andersen also made a diving glove stop on Foligno in the second period stymied and a quick left pad save on Zemgus Girgensons in the first.

“You just lift your head up and look to the sky,” Foligno said. “It’s his night, he played really well. He made some amazing saves for those guys.”

After arriving from Anaheim during the offseason, Andersen started slowly, allowing seven goals in his Toronto debut. He has settled down, however. His save percentage jumped from .891 to .903 on Thursday.

“I feel more confident out there on the ice and it leads to good saves,” Andersen said. “Looking a little bit easier than usual.”

The Sabres created offense easier than they have all season, only they couldn’t finish.

“You have to give their goalie some credit, that’s 70 (shot) attempts by us on net by us,” Sabres coach Dan Bylsma said. “That’s the most by us this year by a mile.”

Sabres center Ryan O’Reilly said: “(Andersen) made some huge saves for them, but there’s always a way to break a goalie.”

The Sabres entered the night averaging 27 shots a game. They peppered Andersen all game, pumping 15, 16 and 12 shots in the periods.

Why was Thursday so different?

Ennis said: “I think we’re just trying to get it behind them and work it low and really emphasize shooting it and getting bodies in front. If we keep doing that, it’ll go in.”

The Sabres, who are 1-3 at home, got burned by Leafs rookie Mitch Marner, a terrific prospect overshadowed by first overall pick Auston Matthews.

Marner began the game with one goal in his first 10 NHL games, but he scored 4:08 into the game and again 1:50 into the second period.

After the Leafs seized control of the game, many of the Toronto fans among the 18,183 spectators occasionally started “Go Leafs, go” chants.

For one of the few times in recent years, Leafs supporters went home happy.