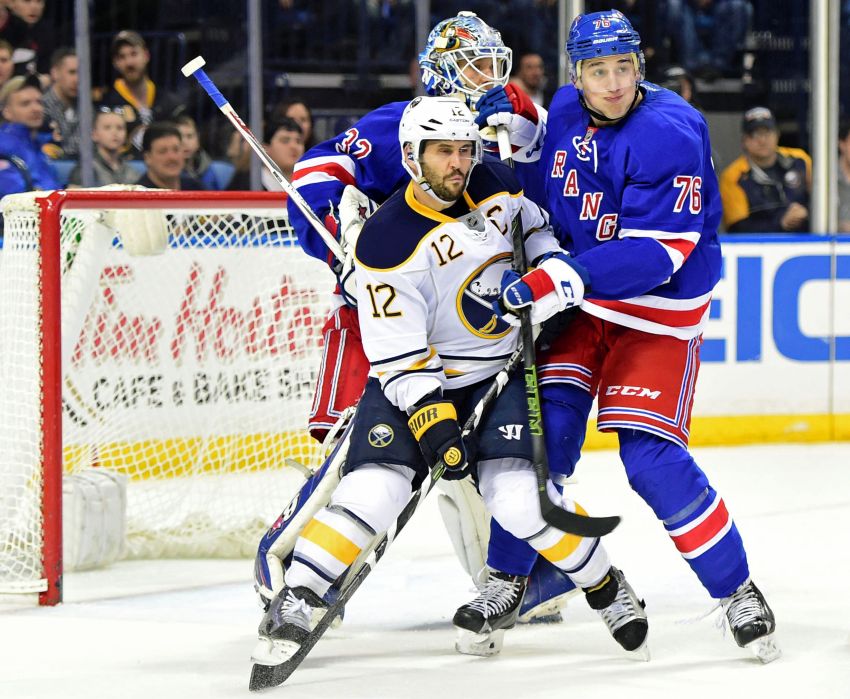 As a youngster with the New Jersey Devils, years before he developed into an often lethal scoring threat, the diminutive winger won a Stanley Cup in 2003 playing on a checking line.

“I came into the league kind of in the role I’m in now,” Gionta said Wednesday after the Sabres prepared for tonight’s road tilt against the Montreal Canadiens, the team he captained from 2010-14.

While Gionta has compiled seven seasons of 20 or more goals, including a 48-score campaign, the qualities that helped the Greece native establish himself on those Devils teams have never left him.

That’s why Gionta, 37, has transitioned back into a checking role this season. For about two months, the 14-year veteran has mostly been skating beside center Johan Larsson and Marcus Foligno.

“The fact that he’s put in a different role right now … on the checking side of things, playing against the other teams’ top lines, responsible, that hasn’t changed who he is or how he approaches the game,” said Sabres defenseman Josh Gorges, Gionta’s close friend and teammate in Montreal.

Well, his approach has changed a little. Gionta, after all, is one of the NHL’s oldest players.

“I’ve had to adapt it since I got older,” he said inside the First Niagara Center.

That means Gionta warms up by doing a of lot “maintenance stuff.”

“He does a lot of things to get his muscles fired up,” Foligno said. “I think he says he’s an older man, so he can’t just jump out of bed and go run or do something like that. He takes his 30 minutes.”

A half an hour to play 17 minutes, 43 seconds a game – the team’s fourth-highest total among forwards.

“You look at him, he’s in great shape,” Foligno said. “I think that’s why he’s able to get going. He doesn’t look 37, let’s put it that way. He skates well out there and he still looks like he’s got a lot more years ahead of him.”

Gionta has one season left on his three-year, $12.75 million contract. The Sabres haven’t had someone as old as him since Teppo Numminen, who retired at 40 in 2009.

How long would Gionta, who’s still a strong skater, like to keep playing?

“As long as I feel good,” he said. “Right now, I feel good. Coming into next year, I hope I feel the same way. I feel good day in and day out even though you’re grinding through the season.”

This season, of course, has been difficult for Gionta. The only Sabres player with a Cup ring – coach Dan Bylsma also earned one in 2009 – isn’t used to losing. Gionta had experienced just one losing season – 2011-12 in Montreal – before joining the Sabres.

“I think he has a real good understanding of what it takes to win and how to play to win,” Bylsma said. “That’s something I think he demonstrates both vocally to our players and how he plays on the ice.”

These days, Gionta’s in the midst of the second straight season in which he’ll miss the playoffs. Still, the Sabres have greatly improved in most areas following a wretched 30th-place finish in 2014-15.

“You have to look at the overall progress of certain guys and where the team’s going as a whole, as an organization,” Gionta said. “I think we’ve made some big steps this year. (It’s still) not where we want to be.”

He added: “There’s times that things have been great and times they’ve been frustrating.”

Gionta said his lack of offense doesn’t frustrate him. Despite receiving regular power-play duty, he has only eight goals in 65 games this season, including just one in the last 17 contests.

“He’s not the goal scorer he once was, but (he’s) being effective in a lot of areas of the game,” Bylsma said.

A year ago, Gionta was in the midst of a 14-game stretch in which he compiled six goals and 16 points.

“I’ve kind of come full circle back to earth,” he said. “Obviously, the offensive numbers are for the younger guys now. I’m just trying to help the team whatever I can.”

That’s means skating on a checking line. The trio has quietly become perhaps the Sabres’ most reliable and stable.

Foligno said the linemates read off each other.

“We’re quick on the attack, and that’s the biggest thing for us, we’ve been getting results,” he said.