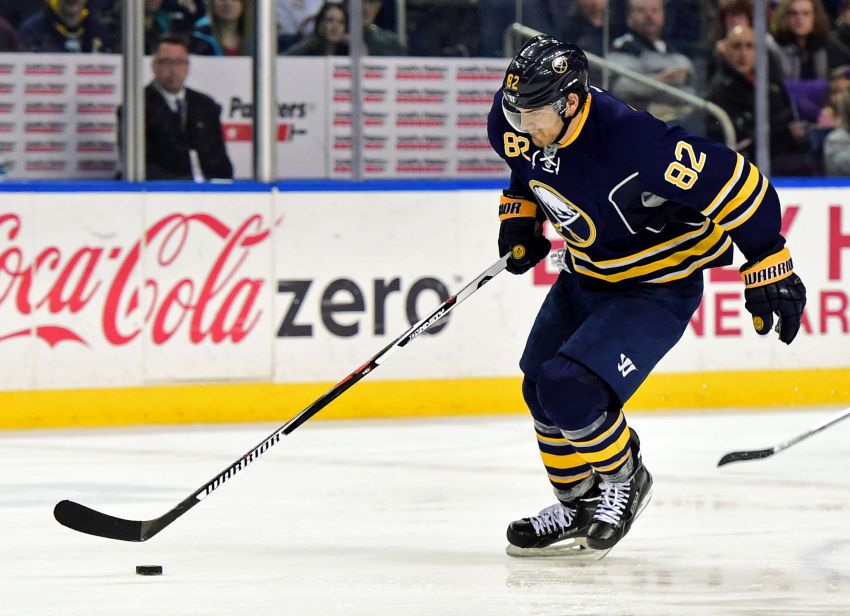 BUFFALO – Four years ago this month, the Sabres summoned a rookie with a famous hockey name and one game of NHL experience for the stretch drive of their playoff push.

For years, as he struggled to find consistency and score, Foligno’s play, fairly or not, has been measured against that rollicking 13-game run he enjoyed as a 20-year-old.

“It wasn’t 82 (games), so if I was here all year it might’ve been a different story, different expectations,” Foligno said Monday. “Yeah, it definitely raised some heads.”

It probably raised expectations too high for the Buffalo-born Foligno, the son of popular former Sabres captain Mike Foligno. Instead of being allowed to acclimate slowly to the NHL like other youngsters, the 6-foot-3, 226-pound Foligno was immediately expected to be a 25- or 30-goal power forward.

Of course, Foligno possesses some slick moves, but in reality, he’s more of a checker, a role he has played very well recently while creating offense beside center Johan Larsson and Brian Gionta.

“I think not that I’m a slow developer or a late developer or anything like that,” Foligno said. “It takes time. This year has definitely been the best I’ve felt. It’s good it’s starting to change.”

Foligno, the only plus forward on the team, has five goals and eight points in his last eight home games entering tonight’s tilt against the Montreal Canadiens inside the First Niagara Center. He scored his career-high ninth goal Saturday afternoon.

“The way I’m playing now it’s similar to what it was in the 13-game segment,” Foligno said. “I think I just have to bring the simple game every night where I have been.”

So what has changed for Foligno?

“I think I start to wig out a little bit when I see Marcus toe-drag a guy and score top shelf in a shootout and go, ‘That’s not your game,’” he said about one of Foligno’s recent goals. “It was a great play and a great goal for us, but when he’s consistently on his game and being a big, strong physical guy, presence, forechecking in the offensive zone and at the net, then he’s playing his best.

“I think that’s what he’s been most consistent at doing.”

The goals and points, Foligno believes, are a product of becoming “a full power forward.”

Incredibly, with winger Tyler Ennis recovering from a concussion, Foligno has been here longer than any player on Buffalo’s current roster.

“If someone would’ve told me that when I first got called up, I wouldn’t have believed them,” Foligno said about outlasting so many teammates. “It feels good to still be here. That’s a positive. There’s (been) a lot of changes. Obviously, I want to be here and to be a big part of this team moving forward.”

Foligno has experienced a bit of everything during his 255-game career. In his early days, he played for two veteran teams built to challenge for the Stanley Cup. Then the Sabres underwent a deep, two-year rebuild in which they finished 30th twice.

These days, Foligno sees a light at the end of the tunnel following so much losing.

“(I) want to stay here and develop this trend going forward because I think we have a lot of good things in line for the future,” he said. “We’re only going to get better.”

To be the last player left from past eras is special to Foligno, who appreciates the trust the Sabres have shown in him.

“(The belief) you’re going to help or be one of the reasons that we get through all this stuff is huge,” Foligno said. “I think you want to be that guy. Hopefully, in a couple of years or whenever it is, when we’ve raised a Stanley Cup over our head, (you) look back and you’re going to say, ‘Wow, we went through all the tough parts. It was well worth it.’

“That’s what I believe in. That’s what I think’s going to come. Everyone in here is eventually going to believe we’re going to win a Stanley Cup.”