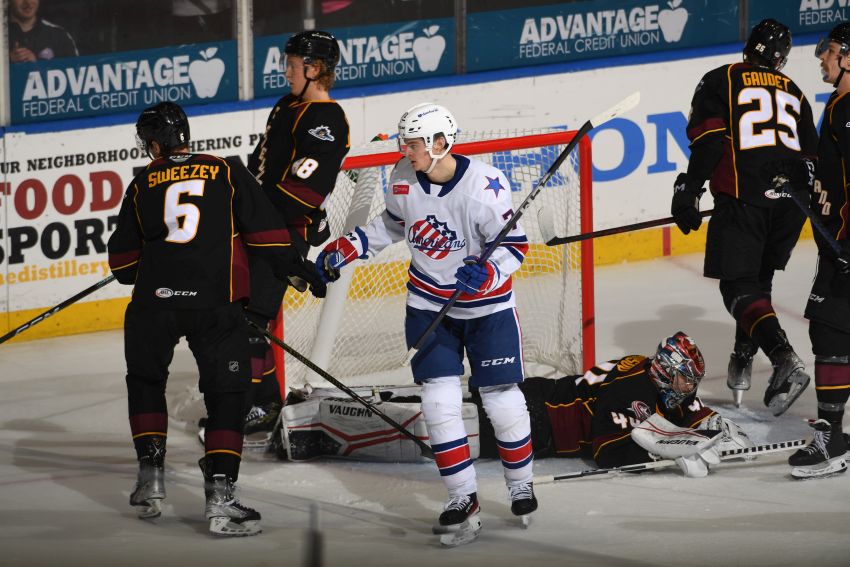 ROCHESTER – In scoring his first two goals for the Americans, rookie Filip Cederqvist showcased why he has developed into one of the Buffalo Sabres’ most intriguing forward prospects.

Early in the second period of Friday’s 6-5 overtime loss, Cederqvist, 22, grabbed Isak Rosen’s pass beside the net on the power play and quickly stuffed the puck past Cleveland Monsters goalie Daniil Tarasov.

The 6-foot-3, 196-pound Cederqvist scored another power-play goal midway through the period, knocking Linus Weissbach’s pass out of the air in front of the net and beating Tarasov.

The Swedish winger’s size and soft hands helped the Amerks build a two-goal lead. Late in the third period, however, his immaturity allowed Cleveland to tie the game.

With the Amerks up 5-4, Cederqvist took a slashing penalty, and Kirill Marchenko scored a six-on-four power-play goal with 64 seconds left.

“It’s too bad, he had a spectacular night,” he said in Blue Cross Arena. “He was playing good hockey, his best game in the American League. We’re a young team, he took a really immature penalty and cost his team a win.”

Cederqvist took responsibility for the penalty.

“It’s my blame,” he said following his three-point night.

Appert’s confident Cederqvist, a fifth-round pick in 2019, 143rd overall, will learn from his mistake.

“He won’t make that again,” he said. “He’s been winning puck battles, he’s been playing around the blue paint, he’s been doing thing that he needs to do with his skill set to be a successful player in the American Hockey League and then try to grow from there.

“So we like what he’s doing, we like where he’s going. It’s too bad that the end dampened what was a great night for him.”

Goalie Beck Warm started for the Amerks on Saturday in Belleville, making 32 saves in their 3-2 shootout loss to the Senators.

Warm, an AHL All-Star in 2020-21, played because the Amerks’ other goalies – Michael Houser, Ukko-Pekka Luukkonen and Malcolm Subban – are all battling the flu.

The Amerks recalled Warm, 23, from the Cincinnati Cyclones on Friday after Luukkonen showed up to the rink ill. Appert said they couldn’t find a flight for Warm, so he drove about seven hours from Cincinnati, arriving at Blue Cross Arena shortly after 7 p.m., when their game against Cleveland was starting.

Houser tried to play while ill, but just over a minute into the third period, cramps forced him to leave.

Warm went into the game, and not surprisingly, he struggled, allowing a goal on the first shot. Overall, he stopped just five of the eight shots he faced.

The Amerks signed Leif Hertz, a Canadian university goalie, to an amateur tryout to serve as their backup Saturday.