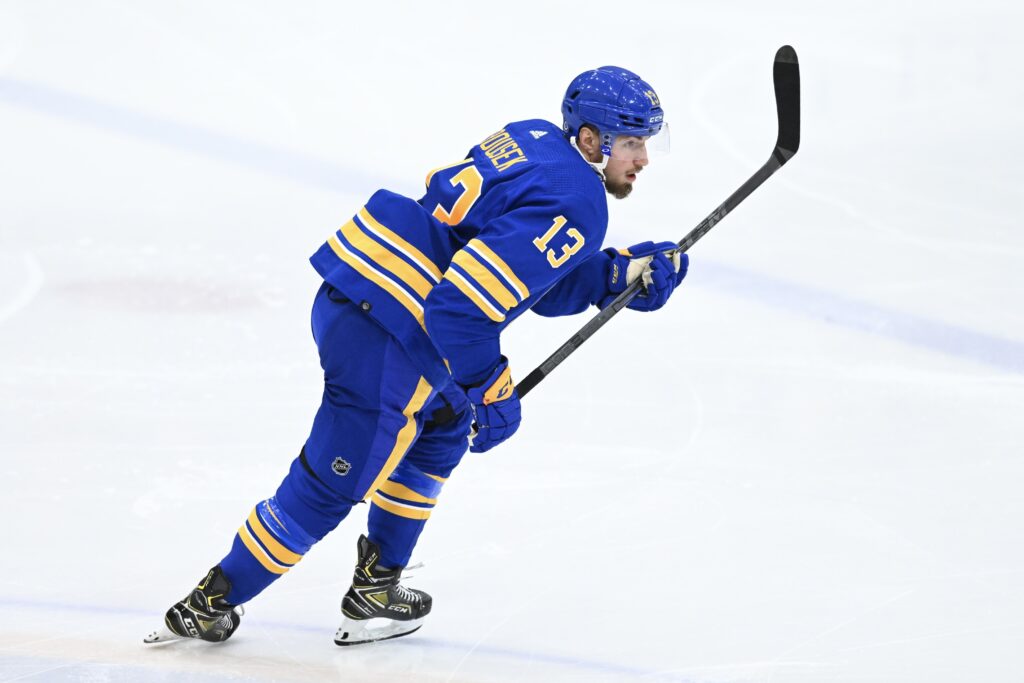 In recording two goals and six points as the Amerks won two Calder Cup Playoff series, the Czech established himself as one of the Sabres’ notable forward prospects.

This year, the Sabres believe Rousek, 23, will keep making more significant strides in his development.

“We expect him to be a high-end American League player this year and to start to inch toward trying to be a guy that can get called up to the National Hockey League,” Amerks coach Seth Appert said Saturday following the Sabres’ 7-4 win over the New Jersey Devils in the Prospects Challenge at LECOM Harborcenter.

Based on his early exploits, Rousek appears ready meet those high expectations. Following a performance Appert said “was just pretty good” in Thursday’s tournament opener, Rousek was one of the best players on the ice Saturday.

“He was elite tonight,” Appert said. “He was on the puck, he was hard, he won puck battles, he created offense. He penalty killed well, something he didn’t do much last year because of his short time.”

“We haven’t practiced before, just first time on a line, on the ice today,” said Rousek, who also played on the power play. “But it was pretty good.”

Appert said it was important to put Rousek beside Kulich. Yes, Rousek is an adroit passer who possesses what Appert has called “high-end offensive hockey intelligence.” Meanwhile, Kulich, who had an empty-net goal and two assists, is a supreme finisher.

But the pairing made sense on another level.

“It’s a hard adjustment for these guys, so Jiri to have a big brother, so to speak, not only on your team but on your line, I thought could be really beneficial,” he said.

Less than a year ago, Rousek, having undergone ACL surgery, was almost an afterthought. He missed all of training camp and endured a six-month recovery.

Still, as he rehabbed in Rochester, he made a strong impression on the Sabres.

“We had a lot of faith in him by the way he handled that,” Appert said of the rehab. “Showed up every morning, first guy at the rink, does his rehab, smile on his face, happy to be here. So he attacked his rehab in such a manner that we felt confident that the kid had a great attitude and great work ethic.”

The Amerks eased Rousek, a sixth-round pick in 2019, 160th overall, into the lineup in mid-March. Then late in the regular season, as they fought to qualify for the playoffs with a lineup depleted by injuries and recalls, he scored his first goal in his 17th appearance.

The 5-foot-11, 191-pound Rousek quickly found a groove, and he compiled all of his postseason points in the first seven games.

“He showed in the playoffs what he really has inside of him as a player, and we’re just looking to see that continue to build this year,” Appert said.

Warm, who signed an AHL contract with Rochester in July, is likely ticketed for the Cincinnati Cyclones, Buffalo’s ECHL affiliate, to start the season.

In Warm, 23, the organization has an intriguing netminder. While he spent most of last season with the ECHL’s Norfolk Admirals, in 2020-21, he was an AHL Central Division All-Star, posting a 2.74 goals-against average and a .914 save percentage in 14 outings with the Chicago Wolves.

Most goalies in rookie tournaments, of course, don’t have that kind of pro experience.

“It’s a nice feeling as a coach, because you have a lot of kids, right?” Appert said. “And he doesn’t feel like that. … He’s had a lot of success. He had a lot of success in junior, he had success that first year in the American League. Kind of got stuck in a numbers game (last) year in that organization (Carolina Hurricanes).

“And the other thing about him, every coach you talk to about him when we were contemplating signing him this summer just raves about the teammate he is, the work ethic, the competitiveness. I think a guy like that is very comfortable for a young team to play in front of.”