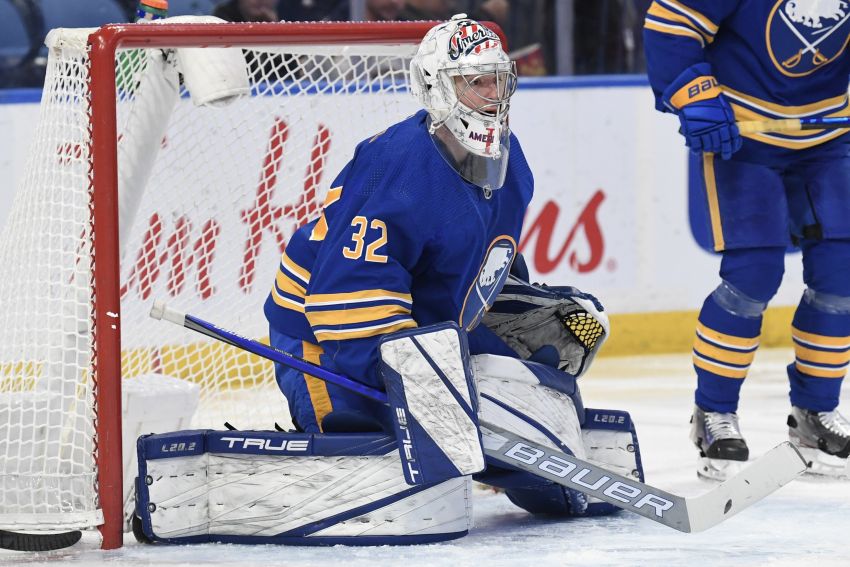 BUFFALO – For the time being, the Sabres’ net belongs to goalie Michael Houser.

When the Sabres continue their four-game road trip Saturday against the Arizona Coyotes, Houser, 29, will likely start his seventh NHL game.

A stunning run of bad luck in net this season – three injuries and an illness – forced the Sabres to sign Houser to an NHL contract Jan. 12. Over the next two weeks, Houser spelled Aaron Dell twice, winning both games.

“Anytime you get an opportunity to maybe get a couple games in a short amount of time, it’s an opportunity,” Houser said following Thursday’s practice inside LECOM Harborcenter. “You never want to see a goalie go down, being injury, suspension, sent down, whatever it is … but it opens up chances and my job is to kind of take advantage of it.”

“He wants to go out there and earn his ice and earn his spot,” Anderson said. “Why not him? That would be my message to him. Why not you? The door’s open, kick it open. Go in there and fight for your ice and take it. He’s done a pretty good job in practice and works hard and earns the respect of the guys.

“I haven’t heard one guy from stepping in here in training camp say anything, nothing but positive things about the guy. So I’m happy for him and hoping that he’s able to continue to play well and push for ice time.”

He started the season in the ECHL before playing 11 times for the Rochester Americans.

The Sabres feel comfortable with Houser in net. But who will be their other goalie Saturday? Houser was one of three who participated in Thursday’s practice.

Anderson, out since Nov. 2, went through his first full session Thursday. The veteran returned to practice last Friday. Dustin Tokarski, who’s still dealing with the effects of COVID-19, also practiced in a limited role. Tokarski went into protocol Dec. 2 and started practicing again late last month, although he has stopped at times.

Meanwhile, Sabres coach Don Granato said Dell skated on his own. Dell is suspended for Saturday’s game, Sunday’s against the Colorado Avalanche and Tuesday’s versus the Vegas Golden Knights.

“There’s only so many reps to be handed out,” Granato said. “It’s easier to distribute it through three guys than four at this point.”

Anderson, whose injury is believed to be in the head or neck area, wants to ramp up his practice load and see how he responds.

“It’s hard to say true yes or no as far as what your status is for the weekend, but we’ll know more tomorrow after we get on the ice and keep progressing.”

“When the time is right, the time is right,” he said. “We’re all competitors. I’m a competitor. My job is to get better and get out there and play, and I want to play. I think that’s the best thing, is the mentality of wanting to play. But on the other side of it, you have to be honest with yourself.”

Could Anderson, 40, and Tokarski, 32, both potentially accompany the Sabres on their trip?

“Both Craig and Tokarski have had injuries that nobody knows but them,” Granato said. “No doctor, no medical advisor; it’s just how they feel and only they know how they feel with what they’re dealing with. So, yeah, they remain day to day because of that, and we sit and wait for them. … There is a mystery to all of this.”

Senators coach D.J. Smith told reporters Thursday that Batherson will be out “at least two months,” according to The Ottawa Sun.

“Whenever the league takes over, you just step back,” he said. “There’s lots of things you could get emotional about within the context of a single game or a single situation, and you just learn not to. So I stepped back.”

The Sabres on Thursday reassigned defenseman Casey Fitzgerald from the Amerks to the taxi squad.