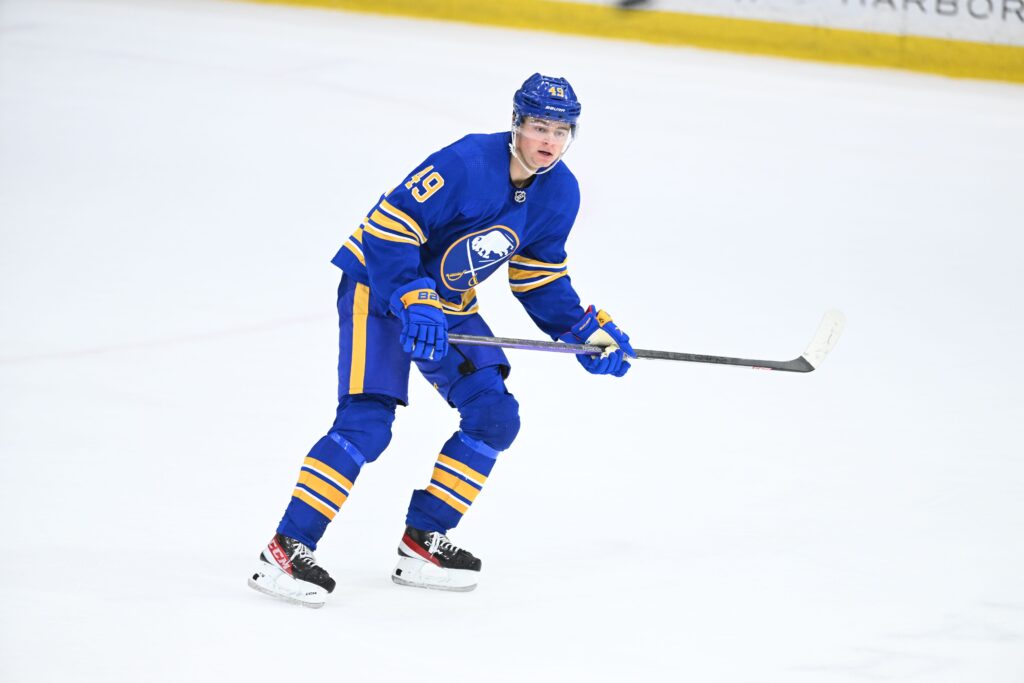 But coach Barry Smith found wherever he put the 6-foot-3 Cederqvist in the lineup during the preseason, the youngster “was empowering” his teammates.

So Smith kept moving the 208-pound youngster up the lineup.

As Cederqvist enjoyed a standout campaign, recording 14 goals and 32 points in 49 games for a team so bad it was relegated to the second division, the Sabres’ development staff watched closely.

Ex-Sabres GM Jason Botterill drafted Cederqvist in the fifth-round in 2019, 143rd overall, one of several late-round picks he used to select European prospects.

There wasn’t much buzz about Cederqvist until last season. But Rochester Americans coach Seth Appert said the staff – director Adam Mair and coaches Tim Kennedy and Nathan Paetsch – liked the winger’s talents and pushed for the Sabres to sign him.

In June, they inked Cederqvist to a two-year, entry-level contract.

“Here’s a kid that’s a late bloomer, wasn’t really on the Sweden national team’s radar when he was younger,” Appert said.

Then Appert used his hands to illustrate Cederqvist’s development.

“(He’s) just going like this in just a slow, steady march,” he said, motioning in an upward trajectory. “His work ethic is high, his attitude’s great. Those are great kids to work with because you want to be around guys like that. That’s a credit to him and I think I think he’s gonna be a good fit with us.”

In Cederqvist, who will almost certainly start the season in the AHL, the Sabres have a bullish presence who Smith described as “relentless.”

“He protects the puck well, so if he has it, it’s not going to be a turnover. You have to work to get the puck off that guy. So I think he plays with purpose. He can block shots. He’s got a good stick. He’ll be net front all day long.”

Not surprisingly, Cederqvist, 22, does much of his damage in front of the net. He scored a power-play goal there in Saturday’s 7-4 win over the New Jersey Devils in the Prospects Challenge, potting a loose puck.

“Last year in Djurgarden, it was mostly goals like that, in front of the net,” Cederqvist said Sunday. “I played on a line with a very good player, (former San Jose Sharks forward) Marcus Sorensen, so I spent a lot of time in front of the net just trying to be strong there.”

In Monday afternoon’s 6-3 win over the Ottawa Senators in the Prospects Challenge finale at LECOM Harborcenter, Cederqvist created Tyson Kozak’s second-period goal by driving to the net and one-handing the center a pass.

Cederqvist traces his improvement to his hulking frame. When the Sabres drafted him, he was 6-foot-1 and 187 pounds. Today, he’s listed as the heaviest player their rookie camp roster.

“I’ve grown,” Cederqvist said. “I’m a bigger guy. And I think when I was a junior, I had a tough time to crash the net. But I think that these last two years I’ve been working hard to like, do one cutback and then try to go to the net more. And I think that really has paid off and has helped me to produce points on the senior level.”

Right away, in his first days here, Cederqvist said he has felt a difference on the smaller North American ice surface.

“When I start learning where the spaces are and stuff like that, my game is pretty good for a smaller rink I think, like big and closer to the net,” he said. “I think that’s a positive for me.”

Kozak and center Matt Savoie each scored twice Monday as the Sabres finished the rookie tournament 3-0. Wingers Linus Weissbach and Lukas Rousek scored the other goals.