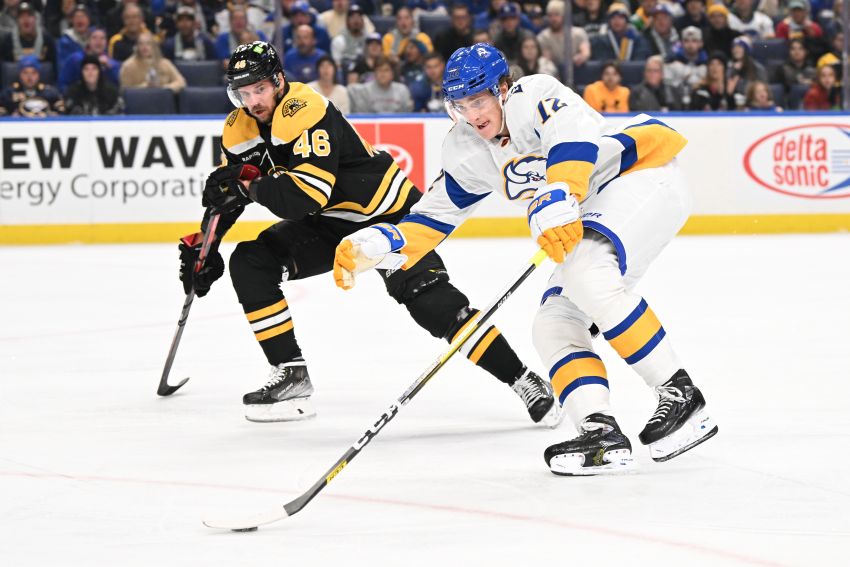 So while they’re ticked off about Saturday’s 3-1 loss to the Boston Bruins, they know if they keep replicating that effort, they’ll start winning again.

Against one of the NHL’s heavyweights, the Sabres grabbed any early lead and kept generating offense while keeping the Bruins in check before a capacity crowd of 19,070 fans at KeyBank Center.

Center Tage Thompson’s nifty short-handed goal opened the scoring 5:17 into the contest, and the Sabres held the lead until Patrice Bergeron’s power-play goal late in the second period.

“It’s one of those things where it’s a learning curve for us,” said Sabres goalie Craig Anderson, who made 27 saves. “We’re still learning. We’ve got a lot of young guys. We’re still trying to find our identity and find our way. But tonight was a step in the right direction even though the outcome’s not what we wanted.”

Of course, the veteran Bruins, who improved to 13-2-0 this season, can exploit the smallest mistake.

“You give them an inch, they’re going to take a mile,” Thompson said. “That’s kind of what happened tonight.”

That happened in the third period, when Tomas Nosek knocked Sabres rookie Jack Quinn off the puck in the Buffalo zone. A second later, Jakub Zboril scored his first NHL goal at 12:31.

“We played good for 55 minutes and then a little turnover in the D-zone and they put it in the back of the net,” said Thompson, who has scored a whopping 10 goals and 16 points in his last eight games. They’re opportunistic. You give them chances, they’re going to score. Most teams in the NHL, good teams are going to do that. We saw that against Vegas, we saw it here tonight against Boston.”

Anderson said: “Today was one of our better games that we played over the last week or so. Attention to detail was excellent. That’s a great hockey team over there. They wait for you to make mistakes. They’ve been playing like that for over a decade. They sit there, they play the right way, they make you open it up a little bit and they wait for you to make a mistake and they pounce on it.”

The Sabres certainly experienced that in Thursday’s 7-4 losses to the Vegas Golden Knights and earlier road setbacks to the Carolina Hurricanes and Tampa Bay Lightning.

Sabres coach Don Granato said losses to some of the league’s elite teams has left a “bitter tastes in their mouths.”

“We’ve got a group that – I’ve said it before – they’re not happy,” said Granato, whose team dropped below .500. “It pisses them off. That’s a really good thing for us is we brought in competitive people. We know they’re young, but we brought in competitive people for that reason. When this stuff happens, they don’t like it. They want to fix it. And I think the silver lining is they know they can fix it.”

The Sabres breathed a huge sigh of relief when defenseman Rasmus Dahlin returned for the third period after exiting the game when he blocked Jake DeBrusk’s shot almost 16 minutes into the second.

Dahlin, the Sabres’ leader in ice time, hobbled off the ice and headed to the dressing room after essentially finishing the shift on one leg.

“Probably the best way to say it is it will be a few days of rest and then it will be day to day,” Granato said.

Meanwhile, defenseman Lawrence Pilut replaced Kale Clague, who was a minus-4 in Thursday’s loss.

Update: The Sabres have sent Clague back to the Rochester Americans.

Anderson looked sharp throughout just his fifth start this season.

“He was good, he was solid,” Granato said of Anderson. “I thought we gave him shot selection that he could read shooters very well, and then there were a few instances where he just was outstanding reading shooters when maybe it was more an inadvertent play or a two-on-one.

“You can see his knowledge of the position, his hockey sense, reading plays and how plays will develop in front of him. Very nice play by him.”