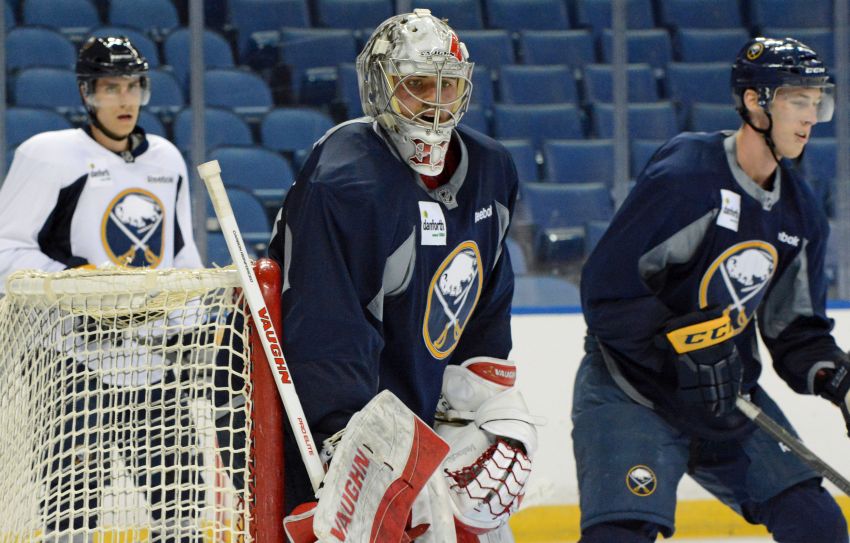 BUFFALO – Goalie Jason Kasdorf could make his NHL debut in one of the Sabres’ final games this season, coach Dan Bylsma said this afternoon following the rookie’s first full practice.

Kasdorf, 23, arrived from R.P.I two weeks ago with a groin injury he suffered in his final NCAA game. He said he’s fully recovered. The Winnipeg native recently started working with goalie coach Andrew Allen on the ice. Kasdorf won’t accompany the Sabres on their two-game road trip, which begins Saturday against the New York Rangers.

In today’s practice, the release and velocity of NHL shots wowed Kasdorf.

“I think the biggest thing is their release,” he said. “They release it a little quicker. They can shoot the puck in stride, a little bit harder.”

He added: “I’m just grateful to be here. I’ve learned a lot by watching.”

In other news, Bylsma said it’s unlikely defenseman Cody Franson, out since suffering a neck injury Feb. 19, will return this season.

Meanwhile, Bylsma said he’s “still hoping that we can have a healthy Tyler Ennis for the last five days.”

“Whether that means a game or not, I don’t know,” Bylsma said.

The winger hasn’t played since suffering a concussion Dec. 30. He also won’t accompany the Sabres on the trip.