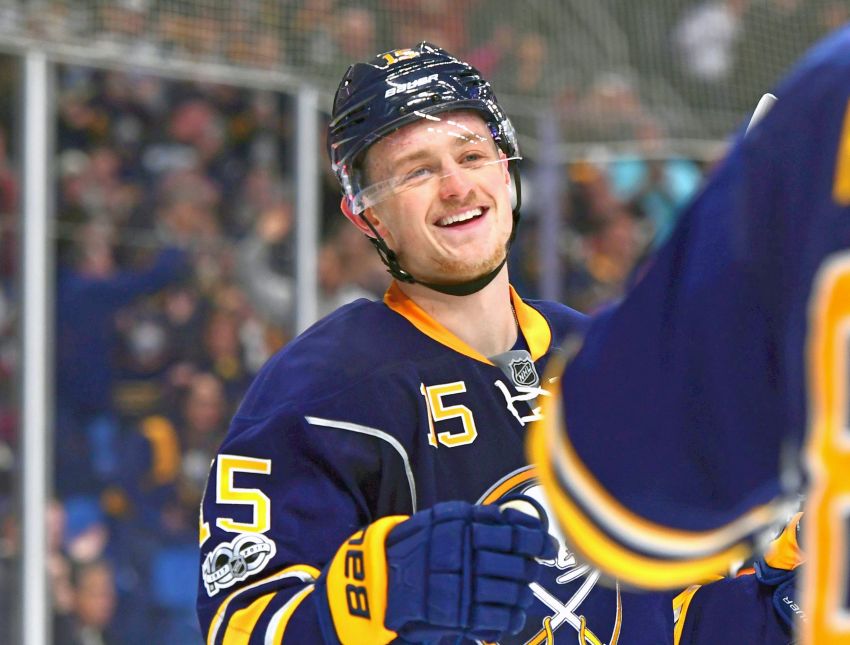 BUFFALO – Sabres center Jack Eichel understands his history of scoring and penchant for shooting the puck has helped label him a goal scorer.

After all, the talented American has scored 39 times in his short career. In only 43 games this season, he has pumped a whopping 173 shots on goal, the NHL’s highest total since his season debut.

Still, Eichel, 20, said when he gets the puck on his stick, his first instinct is usually to dish it.

“(Some people) kind of chuck me up to be more of a goal scorer, but I’m a pass-first guy,” Eichel said Friday inside HarborCenter.

It’s hard to quibble with Eichel’s production since he returned from a high left ankle sprain. His 40 points are 13th in the NHL since his Nov. 29 debut. That .93 point per game average is 14th in the league this season overall.

“When I first came back from the injury, I wasn’t probably where I wanted to be in terms of play,” Eichel said. “I think after a little bit, your ankle starts to feel better, you start to feel like yourself again, you start making plays and you get back to the way that you want to play. It just feels better.”

Eichel feels so much better he has morphed into one of the NHL’s top players in recent weeks. He and Chicago superstar Patrick Kane are tied for the league lead with 19 points since Feb. 1. Eichel’s first in that span with 16 assists.

Points-wise, Eichel’s enjoying the most productive run of his 124-game career. Despite missing the first 21 contests, he’s tied for third in goals and points on the Sabres, just three points behind Kyle Okposo.

“I’d probably say in the last month it’s my best stretch,” Eichel said. “I guess the consistency’s been there.”

That consistency helped the 2015 second overall pick become the 10th player in Sabres history to record 40 or more points in his first two seasons, according to hockey-reference.com.

“By nature he’s a playmaker, likes to have the puck on his stick and make plays,” he said.

Bylsma said the Sabres want Eichel, who possesses a lethal shot, to put four on net a game, a number he has right now.

“You’ve seen some maturation in his game with him shooting the puck,” Bylsma said.

Bylsma believes maturation is also evident in Eichel’s defensive game. As a rookie last season, Eichel was cognizant he needed to adapt and evolve. He knew he couldn’t rely on talent alone.

“He’s worked hard on both sides of the puck – playing defense, defensive positioning, being a reliable and steady guy in the defensive zone,” Bylsma said. “I think his game has come miles in that regard since last year and even this year.

“The next level for Jack is being a guy who can play on both sides of the puck, (a) 200-foot game, being reliable and strong defensively and also be a guy that lugs the mail and is offensive on the other end of the rink.”

“It’s the talent he has, the ability he has to open up games,” Gionta said. “It’s the ability to open up spots and not take the unnecessary chances. He’s starting to really get when that is and it’s time to just kind of stay the course and make sure that we’re responsible with it.”