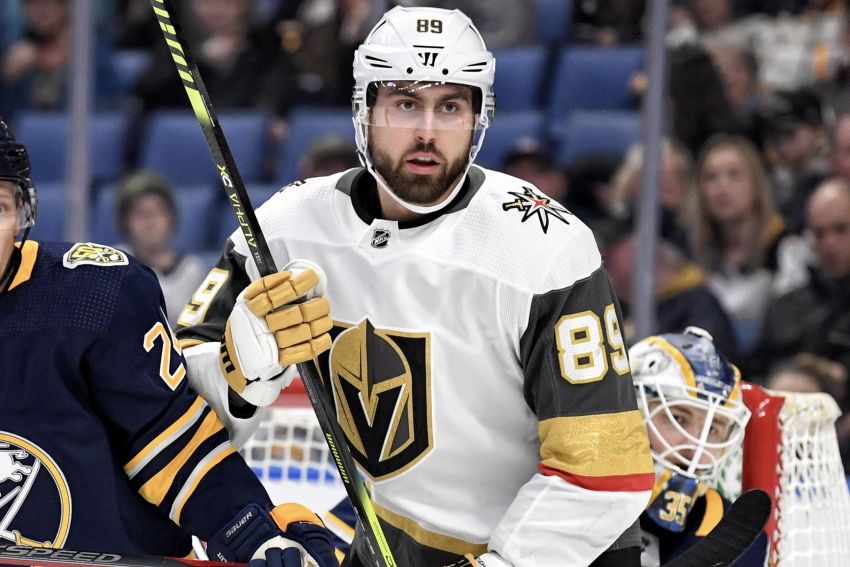 BUFFALO – Sabres winger Alex Tuch couldn’t stop smiling as he recalled those dynamic post-lockout teams of 2006 and 2007. He kept rattling off players, seemingly trying to name the entire roster.

As a child growing up in Baldwinsville, Tuch, who was acquired from the Vegas Golden Knights in Thursday’s blockbuster Jack Eichel trade, loved the Sabres.

“I grew up next to Tim Connolly, who played here for years,” Tuch said prior to Saturday’s 4-3 overtime loss to the Detroit Red Wings at KeyBank Center. “Oh, those teams, I mean, I could probably name most of the guys. (Daniel) Briere, (Chris) Drury, Thomas Vanek, Tim Connolly, Jochen Hecht, Andrew Peters, Patrick Kaleta, Matt Ellis.

“Oh, who was there? Oh, you had Brian Campbell with the spin-o-rama. You had Maxim Afinogenov. I mean, I was a big Sabres fan growing up. I loved watching those guys.”

Tuch, 25, knows playing in Buffalo can be a special experience. He attended games growing up – the Sabres tweeted pictures of him wearing their old red jersey, which he joked he wants brought back – and understands the rabid support in the region when the team is winning.

“It was Buffalo, it was everyone around Buffalo,” he said. “They love their sports here and they love their Buffalo Sabres. I’m really excited to play for a fan base like this. I mean, I was very thankful to play in Vegas where they really embraced us, the entire city embraced us. But coming to Buffalo, it’s gonna be like none other.”

Tuch, who will likely be sidelined another two months as he recovers from shoulder surgery will wear No. 89. Of course, the only other Sabre to sport that number, Alexander Mogilny, is a franchise icon who scored 76 goals in 1992-93.

“It’ll be definitely hard to do anything close to what he’s done with that number,” Tuch said. “But honestly, it was a number I wore, honestly, since I can remember, since I was 5 or 6 years old. I wasn’t able to wear it in the US program or college or anything like that, but when I was able to get it back in Vegas, it really meant a lot to myself and my family. …

“To be able to have it in Buffalo, too, really means a lot. So, I guess, thanks, Alex. Second Alex to wear it, too, which is kind of funny. So, yeah, I’m very excited.”

Gee, you think? Clearly, Tuch feels comfortable in his new organization. He said he spoke to Sabres general manager Kevyn Adams for about 20 or 30 minutes. Adams often talks about acquiring players who want to be in Buffalo.

“It was an honor to be traded for a guy like Jack Eichel,” Tuch said. “He’s an outstanding player and it wasn’t one-for-one, but to be a part of that trade, just to have someone that wants you in their organization means a lot.”

Tuch used to hone his skills with Ellis, now an assistant coach with the Sabres, during the summer at LECOM Harborcenter. His young brother, Luke, lived with Peters when he played for the Jr. Sabres.

“He brought in a lot of energy this morning when he came into the coaches’ room and said hello,” Granato said. “He’s excited. … Knowing him and his personality, it’s a really, really good fit for where we’re at as an organization.”

“I’m a big, fast, strong power forward who plays a pretty diverse role in the lineup,” Tuch said. “Play up and down the lineup, but I try to think of myself as a utility guy that brings a lot of different things to the rink. So I just like to say that I’m pretty hardworking and a high-energy player.”

While Tuch, who underwent shoulder surgery in July, must wait to make his Sabres debut, he might immerse himself with the team. In Vegas this season, he stayed involved, attending every meeting.

“That’s what I plan on doing here as well,” he said. “So, obviously, I’m not battling every night with the guys, but I want to come in and show my support in every way possible. And I like to think that I bring a pretty positive attitude each and every day, even in the situation I’m in.”