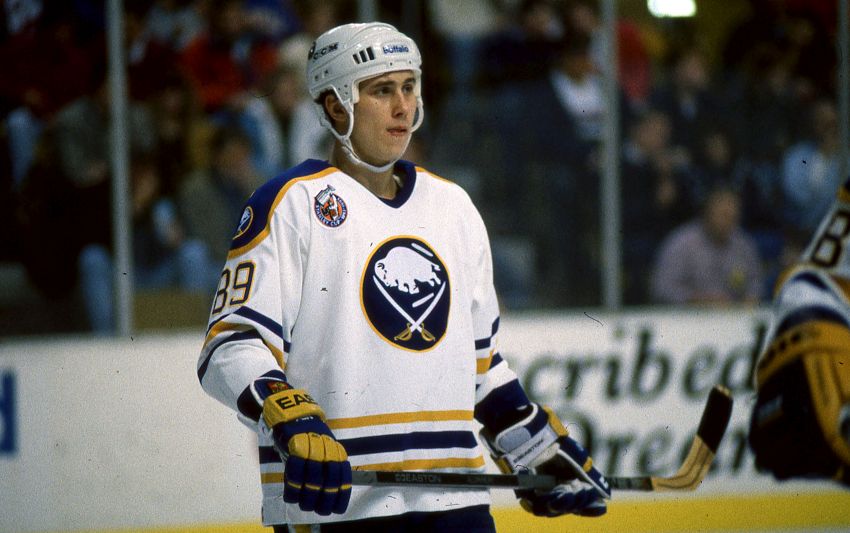 Eleven players Pat LaFontaine called teammates over his 15-year career have been inducted into the Hockey Hall of Fame.

The former Buffalo Sabres superstar joined the New York Islanders at the end of their dynasty, so he played with Mike Bossy and Bryan Trottier, who combined to score nearly 1,100 goals. In Buffalo, LaFontaine watched Dominik Hasek morph into perhaps the greatest goalie in history. In LaFontaine’s final NHL season with the New York Rangers, Wayne Gretzky was finishing perhaps the most illustrious career ever.

But the most dynamic talent LaFontaine played beside, Alexander Mogilny, isn’t in the Hall of Fame. Today, after 12 years of waiting, he could finally receive his call.

“Alex, for me, was the best player I played with and best player I saw,” LaFontaine, a 2003 Hall of Fame inductee, told the Times Herald on Tuesday.

The COVID-19 pandemic will force the Hall’s 18-member selection committee to discuss this year’s deep pool of candidates virtually for the first time.

“There’s no doubt in my mind it’s time,” LaFontaine said of Mogilny’s election.

The committee has some difficult choices to make. In addition to Mogilny, support seems to be building for diminutive former Calgary Flames star Theoren Fleury, who’s also in his 12th year of eligibility.

Jarome Iginla, a 600-goal scorer who also starred for the Flames, is expected to be elected in his first year of eligibility. Pierre Turgeon, a former Sabres star in his 10th year of eligibility, could also receive strong consideration.

Candidates must receive 14 votes to be elected.

LaFontaine and Mogilny, of course, will forever be linked by the brilliant 1992-93 season they enjoyed together as Sabres linemates.

With LaFontaine adroitly feeding him the puck, the Russian erupted for a franchise-record 76 goals in 77 games. LaFontaine, meanwhile, scored 53 goals and a whopping 148 points, another Sabres record.

The center-wing duo remains one of the most electrifying in NHL history.

“As far as highlight-(reel) goals and as far as speed and doing things at a high level, high speed, we’d shake our heads on the bench most nights,” LaFontaine said of Mogilny’s exploits in 1992-93. “Actually, I had a front-row seat. It was some of the most fun I’ve ever had playing.”

“I mean, they’re going as fast as you can go, and they’re doing things with their hands and their mind and their feet altogether,” he said.

His 76-goal season is tied for the fifth-highest total ever. Only eight players have ever cracked the 70-goal mark.

The gaudy numbers compare favorably to some of hockey’s biggest legends. Mogilny, for example, boasts a higher goals-per game average (.48) than Gordie Howe, Joe Sakic, and Steve Yzerman, according to NHL.com.

But Mogilny’s scoring prowess is just one part of his legacy and the argument he deserves to be in the Hall of Fame. In 1989, Mogilny, just 20, risked everything, becoming the first player to defect from the Soviet Union.

“He was a trailblazer,” said Don Luce, who as the Sabres’ director of evaluation and development helped Mogilny defect with general manager Gerry Meehan in Sweden. “He blazed the trail. He did something that no one else did or would do.”

After Mogilny bolted, many Russians followed, infusing the NHL with some of the world’s best talent.

“That says, ‘Hey, he broke the dam kind of thing,’” said Luce, who opened his home to Mogilny following his arrival. “That’s another thing that puts him into my idea of being a Hall of Famer.”

“How many players were builders while they were playing?” LaFontaine said.

Mogilny, who played six seasons with the Sabres, vanished from the spotlight following his retirement in 2006. If he had remained in North America or been more visible, perhaps he would’ve been elected to the Hall of Fame by now.

Players out of sight are probably out of mind for many voters.

It’s believed the last time he visited Buffalo was in early 2011, for his Sabres Hall of Fame ceremony. For the past several years, he has been serving as president of Amur Khabarovsk, a Kontinental Hockey League team in eastern Russia.

“He’s not one for the limelight,” Luce said. “He doesn’t garner the spotlight. He’s got a lot of self-confidence. He realized he was a real talented player and stuff like that.

“But he didn’t go out in a flashy-type way. He was quiet guy. He didn’t want all the adulation or need them to be the person he was or is.”

He added: “He’s a good person. He was a quiet guy here and stuff. He deserves to be in for his numbers and being a trailblazer. He has the credentials, if you want, to be in the Hall.”