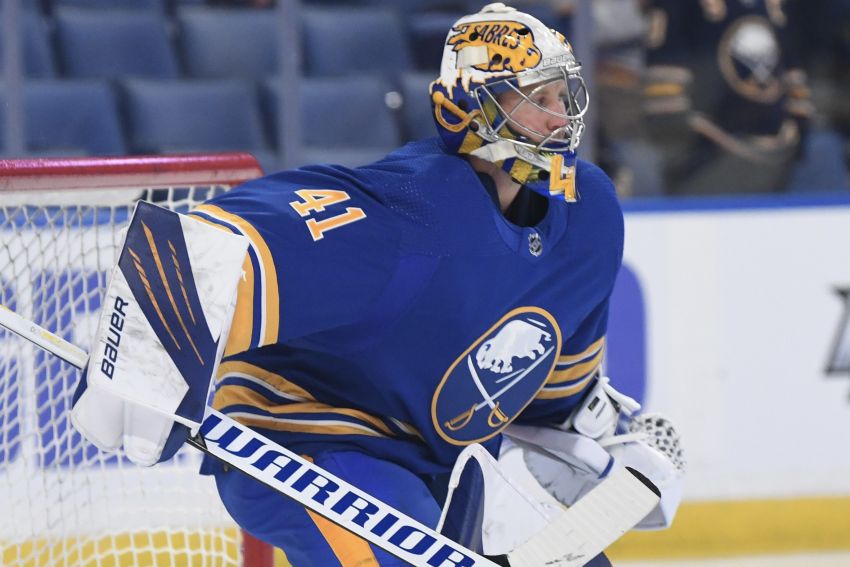 BUFFALO – Goalie Craig Anderson is day to day with an upper-body injury, so the Sabres this morning recalled Aaron Dell from the Rochester Americans.

So, does that mean Dustin Tokarski, who has performed splendidly in his four starts this season, will play tonight against the Detroit Red Wings at KeyBank Center? Sabres coach Don Granato said this morning he hasn’t decided on his starting goalie.

Tokarski played in Thursday’s 5-2 loss to the Seattle Kraken. Anderson last started in Tuesday’s 5-3 setback to the San Jose Sharks.

Granato said Anderson’s injury isn’t serious enough for the Sabres to place him to injured reserve. To make room for Dell, the Sabres sent winger Brett Murray to the AHL.

In other news, Granato said winger Victor Olofsson, who has missed the last two games recovering from a soft tissue injury, will miss tonight’s contest.

“Some encouraging news from the last couple of days,” said Granato, whose Sabres have lost three straight games. “So encouraging that we will hold him out tonight because we don’t want to screw with the progress that he’s made. We think it will be resolved within the next few days to where he will be full-go rather than having him reaggravate and have it linger for an extended time.

Meanwhile, Granato said center Casey Mittelstadt, who suffered an upper-body injury opening night, skated while the Sabres were on their four-game road trip.

“He’s progressing,” Granato said. “No timetable yet. The next timetable would be coming in practice with us full-go and we don’t have a read on that at this point.”