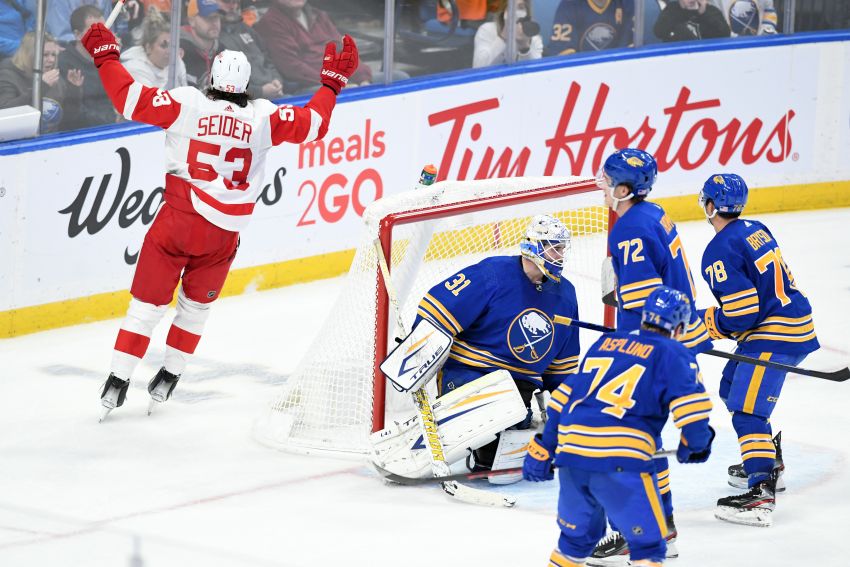 BUFFALO – As the clock ticked down and the Sabres enjoyed a two-goal lead, their three-game losing streak felt like history.

But they settled down, roared back and held a 3-1 advantage after center Arttu Ruotsalainen scored 6:08 into the third period.

The Red Wings had trouble generating offense. Sabres goalie Dustin Tokarski, as he has all season, looked sharp before the crowd of 8,171 fans inside KeyBank Center.

“It was gradual to get back into the game,” coach Don Granato said of the Sabres following their 4-3 overtime loss. “A lot of times, that’s the case when you have a long road trip, especially when you go our west and you come home, it takes a little while to reorientate. I felt it did, but I felt the process of guys fighting through, pushing through was great.”

Then Tyler Bertuzzi erased the Sabres’ lead in 90 seconds. After scoring with 6:24 left, the winger blew by Sabres defenseman Rasmus Dahlin when he tried to poke the puck and beat Tokarski.

What the heck happened to the Sabres?

“We really, really wanted to win,” said Dahlin, whose second-period power-play goal put the Sabres up 2-1. “That maybe came in our head and forced some plays.”

“They probably got uptight before the second goal,” he said. “It was the defensive zone. It wasn’t any doing of their part. It was doing on us. We just slid out of position and created, opened a seam, which is uncharacteristic. So you could look at it, say we must have been tight. It could be the only explanation for it. Because it was a simple coverage that we’ve done over and over and over.

“So I would have to say we were a little tight there, tense there. For what reason? There was no reason. … The cause of it was no tactical issues. We don’t have to go to practice and work anything out tomorrow. It was just a little bit tense or perceived something that wasn’t there.”

Blowing leads has become a disturbing trend. They frittered away a 2-0 advantage in last Sunday’s 3-2 loss to the Los Angeles Kings. On Oct. 28, the Sabres were up 3-0 over the Anaheim Ducks before winning 4-3 in overtime.

“It happens every night in all sports,” Granato said of blown leads. “I don’t think it’s something unique to us.”

Given Dahlin’s struggles over the past year, extra attention will be paid to how he tried to defend Bertuzzi before the tying goal. Dahlin, a left-handed shot, was playing on the right side.

“It’s my off side and I use the inside and he slipped through, so I got to work at it,” Dahlin said.

Granato said Dahlin shouldn’t be blamed for the goal.

“We vacated what we normally do up ice,” he said. “We lost guys up ice and layers. … When you lose the layers before Dahls, their player is able to generate a lot of speed with a huge gap. So you’re waiting for speed to come on you.

“So we can sit here and try to hang Dahls on it. That player’s coming and he can generate speed from 30 feet away and you’re standing there flat-footed. We left Dahls in a very tough position.”

Still, Dahlin enjoyed a solid outing, generating offense. His goal was the first this season by a Sabres defenseman past a goalie.

Prior to the game, the Sabres honored Val James, the first Black American NHL player, for the 40th anniversary of his debut on Nov. 1, 1981.

The Sabres celebrated James throughout the night by wearing special warm-up jerseys and playing tribute videos.

“That long of a period being with one team means a lot to me,” said Girgensons, who joined the Sabres in 2013-14 and is their long-tenured player. “I don’t want to be anywhere else.”

“It wasn’t a great game, I remember,” Girgensons said. “It was me, Brian Flynn and (Mikhail) Grigorenko as a line, and right away, we got, I think, (Pavel) Datsyuk. It was the first shift, we got pinned in our zone for a while. So it was definitely not the start I thought. But at the end of the game I scored and it was great.”

Girgensons is the 32nd player in Sabres history to play 500 games.

One thought on “Red Wings roar back, stun Sabres in overtime: ‘A little bit tense’”