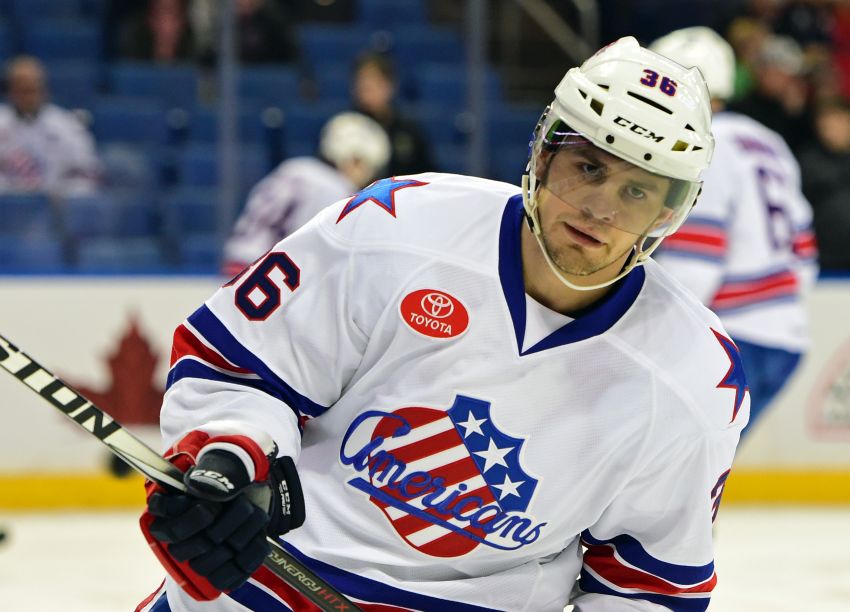 The oft-injured agitator, a veteran of 348 NHL games, never found one.

“Kind of hard to put a word on it,” Kaleta said Friday inside the Blue Cross War Memorial. “But with what I can kind of control playing-wise, I did what I needed to do. I’ll just leave it at that for right now.”

For now, Kaleta, 29, is still a member of the Amerks, the Sabres’ AHL affiliate. One game is left this season, and the Angola native, sidelined since March 25 with an upper-body injury, won’t participate.

Kaleta’s return to the AHL, a league he wants no part of, has been a difficult experience. Injuries and league veteran rules limited him to only 26 games. He debuted Nov. 27 and never played more than four straight contests. He often skated short minutes as a fourth-liner.

“I never accepted being here one bit, not one time during the year,” Kaleta said. “But I embraced it, and I did everything I could to help people around me, younger guys, people in the community. But I don’t accept being here, if that makes sense.”

Despite a full year away, Kaleta believes he has a future with the Sabres, the team he grew up rooting for and took great pride in representing.

“I think I do,” he said. “I think I can help out that team. I think they can benefit from someone like me and what I bring and maybe create a little bit more space for those young guys to do what they do.

“There’s some special guys up there. I don’t need to talk about them, because everyone has seen what they can do. I think a player like me can complement that and just have their backs, do all the stuff I normally do.”

Kaleta, like he did in Buffalo, has become a visible member of the Rochester community. The Amerks honored him before Friday’s home finale, naming him their “Man of the Year” and awarding him the McCullough Trophy for his humanitarian service.

“You’re never going to take that out of me, regardless of the situation,” Kaleta said about his community service.

Still, Kaleta had little desire to revisit his Rochester roots.

“I want to play in the NHL, that’s your goal,” he said. “If I had to play in the AHL, then this would obviously be my No. 1 spot, especially because it’s where I started and it’s close to home. There’s a lot of great people I met in Rochester throughout the years. I love the city of Rochester, but ultimately, no, I want to be in the NHL.”

Kaleta has spent most of his career in the NHL, first receiving regular duty in 2007-08. During his run, he developed a reputation as one of the league’s foremost pests and most ferocious hitters.

His rugged style often proved costly. Thanks to injuries and suspensions, he never played more than 63 games in a NHL season. When Kaleta received a 10-game ban for a hit to the head in early 2013-14, the Sabres’ old regime demoted him to the Amerks, where he played briefly before tearing his ACL.

Kaleta made it back in 2014-15, playing 42 times while battling more injuries. But it was clear more than a year ago his days with the Sabres could be numbered.

He signed a one-year AHL contract in September with an invitation to training camp. New coach Dan Bylsma seemed intent on giving Kaleta a long look before he was injured.

“I still know I can play in the NHL, and it’s going to be a thing I can get fired up about,” Kaleta said. “But I’m going to try use it as a positive moving forward, see what the summer brings. Hopefully, it’s going to bring an opportunity to be able to do what I can do and prove to people that I still got it.”