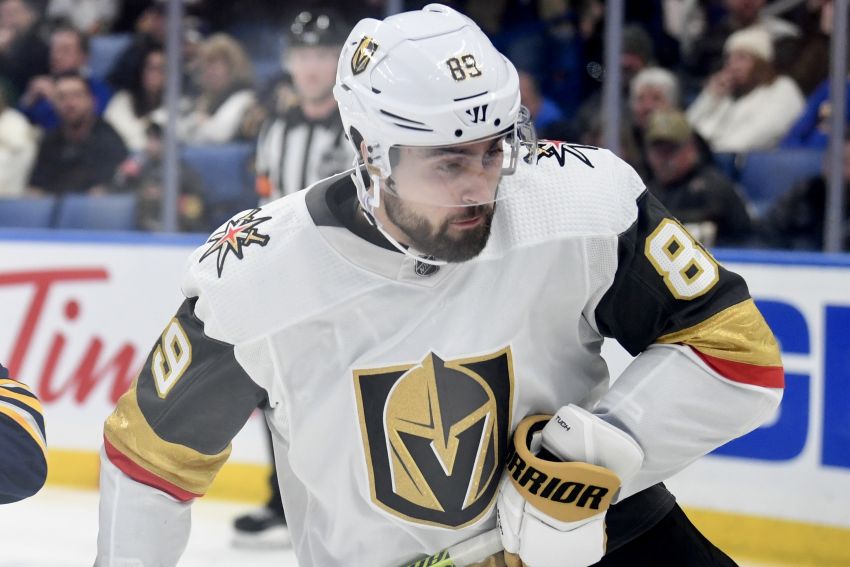 Alex Tuch has scored 61 goals in the NHL. ©2021, Micheline Veluvolu

In trading ex-captain Jack Eichel to the Vegas Golden Knights, the Buffalo Sabres acquired no immediate help for their lineup.

Winger Alex Tuch, who grew up in Baldwinsville rooting for the Sabres, is recovering from shoulder surgery. General manager Kevyn Adams said Tuch will likely be sidelined two more months.

Meanwhile, shortly after the deal was announced, the Sabres assigned center prospect Peyton Krebs, who has 13 games of NHL experience, to the Rochester Americans.

“We’re not in a rush to put him in here right away and have to just jump right into the lineup,” Adams said on a Zoom call Thursday. “This is about the long-term and building this and developing this the right way. And that’s how we’re looking at it.”

The Sabres, of course, have defied expectations this season, compiling a 5-3-1 record entering Thursday’s road game against the Seattle Kraken. Still, as a GM in the midst of a rebuild, Adams wants to exercise patience.

That means the Sabres can swing a blockbuster trade and acquire an injured player and give another one an opportunity to develop in the minors.

“Both of these players fit into our young core moving forward,” Adams said.

When Tuch, 25, underwent shoulder surgery in July, the Golden Knights said he would be sidelined six months. He is in the third season of a seven-year, $33.25 million contract.

Adams said the Sabres doctors are comfortable with where Tuch is in his recovery.

“He’s doing well, I’d say, in terms of his rehab and where he’s at,” he said. “It looks like he’s going to be out a couple more months, which we knew, obviously. … So when he’s ready, he’ll play. I’m not exactly sure when the date will be.”

Tuch has connections to Buffalo, having developed his skills in the offseason with Matt Ellis at LECOM Harborcenter. Ellis is now one of the Sabres’ assistant coaches.

When Tuch played his first game in Buffalo in 2018, about 400 supporters showed up to watch him.

“High character, leader,” Adams said of Tuch. “All the intangibles. Wants to be a part of the solution. He was unbelievable in my conversation with him, and how excited he is to be a Buffalo Sabre. He told me this is a dream come true for him. That’s exactly the type of person and talent on the ice we need. And exactly the type of personality we need off the ice as we drive our culture forward.”

Adams said the Sabres targeted Krebs, 20, and “worked extremely hard” to have him packaged in the deal.

“It’s really important that we targeted young players that are going to fit us moving forward,” Adams said. “And he has a lot of what we were looking for in terms of the way he plays the game, his approach, his on-ice approach, his off-ice approach, his character, his leadership qualities.”

The 6-foot, 185-pound Krebs has recorded one assist in the NHL. He is pointless in nine outings this season. He has also played two games for Vegas’ AHL affiliate, the Henderson Silver Knights, recording five assists.

Adams acknowledged Krebs, who might play for the Amerks tonight at home against the Toronto Marlies, could’ve joined the Sabres right away.

“We know he’s a really good hockey player right now, and what we’re excited about is the hockey player he’s going to become over time,” he said. “And that’s our focus, making sure we set him up for success. And these are similar conversations like (we had about) JJ Peterka, (Mattias) Samuelsson, Jack Quinn. …

“In our mind it was just catch your breath, get your feet under you a little bit, get used to the organization and let’s build this thing. And when it’s the right time, he’ll be here and be here for a long time.”

Krebs played in the NHL, AHL and Western Hockey League last season. He spent most of the year in junior, registering 13 goals and 43 points in 24 games with the Winnipeg Ice. He also represented Team Canada at the World Junior Championship, winning a silver medal with Quinn and Sabres center Dylan Cozens.

“We don’t want to aggravate it because we think we can get it resolved,” Granato said on a Zoom call Thursday from Seattle.

Samuelsson, a defense prospect who suffered a lower-body injury blocking a shot Sept. 17, made his season debut for the Amerks in Wednesday’s 4-3 win over the Belleville Senators.

“He looked fantastic,” Amerks coach Seth Appert said. “I thought he was miserable to play against.”