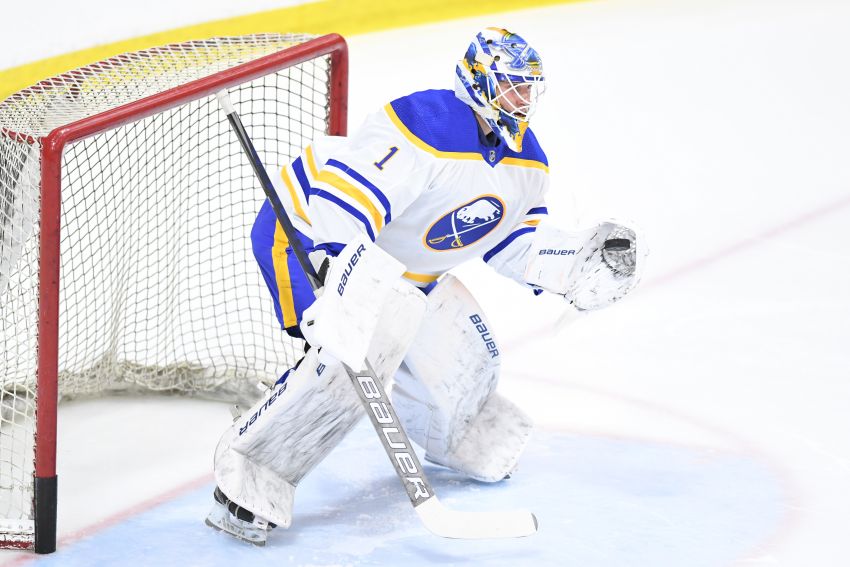 BUFFALO – Ukko-Pekka Luukkonen displayed it often last season, especially toward the end. The Sabres goalie prospect would become locked in and perform so well he developed some swagger.

“It’s just like something you feel during the games,” Luukkonen said of his swagger. “But I think it’s more you build up that confidence. And once you feel like you can play a certain level of game, you get that swagger and you feel like the game slows down in front of you.”

When that happens, the 6-foot-4, 220-pound Luukkonen morphs into the team’s backbone, calmly tending goal while instilling confidence in his teammates.

“He’s extremely competitive without being sloppy,” Appert said prior to Luukkonen’s 22-save effort in Friday’s 3-0 win over the New Jersey Devils in the Prospects Challenge opener. “He’s calm. He has a calm swagger in the net that he exudes to his teammates.”

Luukkonen, who has been labeled the Sabres’ goalie of the future, spent most of 2020-21 in Rochester. He looked impressive in four late-season starts with the Sabres, winning his NHL debut and compiling a .906 goals-against average.

“It gives us confidence to have him back there,” Sabres prospect Brett Murray said. “When he’s on his game, you see (a) two-on-one coming down the ice, you don’t really sweat it too much. You think you got UPL back there, he’s probably going to stop it.”

Friday’s rookie game at Harborcenter was Luukkonen’s first action since he suffered a season-ending left ankle sprain May 1.

“It was easier than I expected to get back to the rhythm of the game,” Luukkonen said following his shutout.

Had he not been injured, Luukkonen likely would’ve earned three or four more NHL starts to close the campaign. He said he stayed in Buffalo to rehab until early June before returning to Finland. He started skating again in early July.

“With the ankle sprains and all that, as a goalie it might take some more time,” Luukkonen said. “But I think we did a good job with it and there were good people here in Buffalo helping me, good people in Finland helping me.”

Luukkonen, of course, said he generated confidence from his first taste of the NHL and learned “what it takes to play in the league.” The structure and higher talent level taught him how he must react quickly and be in control of his body.

“You really kind of scramble a lot because guys can lift the puck even from close, so you just kind of spread your legs and hope that it hits you,” he said. “I think most of all it’s just being able to move better. That’s about it. All the position and everything like that will come as long as you can move.

“I think that was the biggest thing we worked on this summer.”

Right now, Luukkonen could be ticketed for Rochester to receive more seasoning. While he’s entering his third pro season in North America, he has only played 52 games, including just 24 in the AHL.

Not surprisingly, Luukkonen struggled for a bit after the Amerks’ long COVID-19 pause ended, and he finished with an .886 save percentage in 14 AHL outings last season.

Given the Sabres’ sorry state, they might want to start Luukkonen in the minors and reward him with recalls. The three veteran goalies the Sabres have under contract – Craig Anderson, Aaron Dell and Dustin Tokarski – could battle for the two NHL spots.

Anderson, 40, is entering his 19th season and could be a terrific mentor for Luukkonen.

“You can learn a lot,” he said of Anderson. “He’s been around for a long time. I think just those everyday habits, what it takes to be (an) NHL goalie. It’s a long season. That’s one of the most important things, of course. There’s a lot of goalies who can play a couple games well. But if you want be really good, you have to play a lot of games in the season and play them well.”