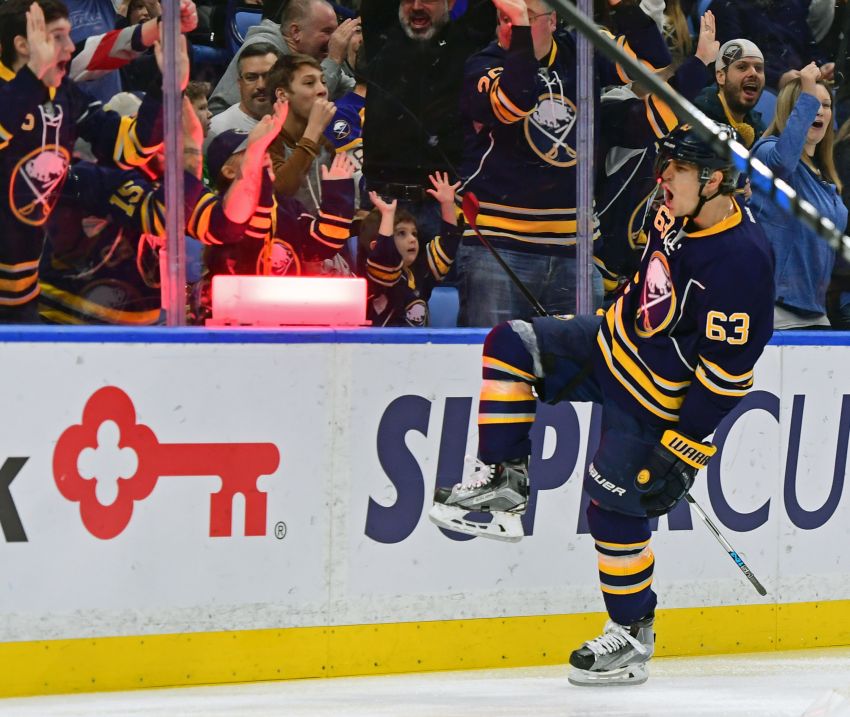 So the team’s longest-tenured player could’ve been forgiven if he didn’t showcase some of his usual creativity and speed for a period or two against the Dallas Stars.

Then on Ennis’ first shift since Nov. 7, he pounced on John Klingberg’s errant pass, skated a few strides into the right circle and wired a shot high into the far corner by goalie Kari Lehtonen.

Just 19 seconds had elapsed into the Sabres’ 4-1 win inside KeyBank Center.

“That’s how I planned it, so that was nice,” a smiling Ennis said told a throng of reporters. “That was a good feeling when that went in.”

With about three minutes left in the first period, he grabbed the puck behind the net and had time and space. Ennis then lifted the puck onto his backhand, raised his stick to the crossbar and quickly tried tuck it in like a lacrosse shot.

The puck fell off, but Ennis appeared to have a stunned Lehtonen beaten.

“I wish that went in,” Ennis said. “I had some room. Pretty frustrated, but maybe one day one of those will go in.”

The move – Michigan’s Mike Legg made it famous by scoring with it in 1996 – shocked Ennis’ teammates on the bench, Sabres center Jack Eichel said.

“We didn’t see it, notice it, at first and we were kind of looking around, ‘Did he really try to do that?’” Eichel said. “He said he kind of just blacked out and tried it. But that’s the element that he brings, that element of creativity and he keeps the opposing team on their heels.”

Sabres coach Dan Bylsma said: “That was just kind of a revelation, a flash of his skill.”

It also showed how quickly Ennis generated some confidence in just his 36th game since the start of 2015-16, a season that ended early because of a concussion.

“To have enough presence of mind to try it in a game when there’s grown men out there trying to crush you, just shows you kind of where the comfort level he’s at,” Bylsma said.

Bylsma and Ennis, 27, said the move often works in practice. Ennis said Florida goalie Roberto Luongo stopped his only other attempt at scoring a lacrosse-style goal.

Ennis, a three-time 20-goal scorer, only has two goals this season.

“I just got to be confident with the puck and make my plays, be creative,” he said. “When I’m confident, that’s when I play my best. I got a goal early, but I was still pretty rusty. I can play a lot better.”

Ennis said his energy held up.

“My wind was good,” Ennis said. “Energy-wise, I felt really good. I just got to get back in the flow of things.”

With no fourth-line center on the roster, the Sabres recalled center Cal O’Reilly on Monday morning.

Reinhart has three goals and 13 points in the last 13 contests.

Despite a shaky outing in Friday’s 5-2 loss in Carolina, Sabres goalie Anders Nilsson still has some strong overall numbers – 7-5-4 with a 2.58 goals-against average and a .924 save percentage – in 16 games.

Those numbers might mean goalie Robin Lehner will start again in tonight’s road tilt against the Toronto Maple Leafs.

Stars coach Lindy Ruff, who led the Sabres from 1997 until 2013, on returning to Buffalo for the fourth time: “It’s still special, but we’re years away from it now.”