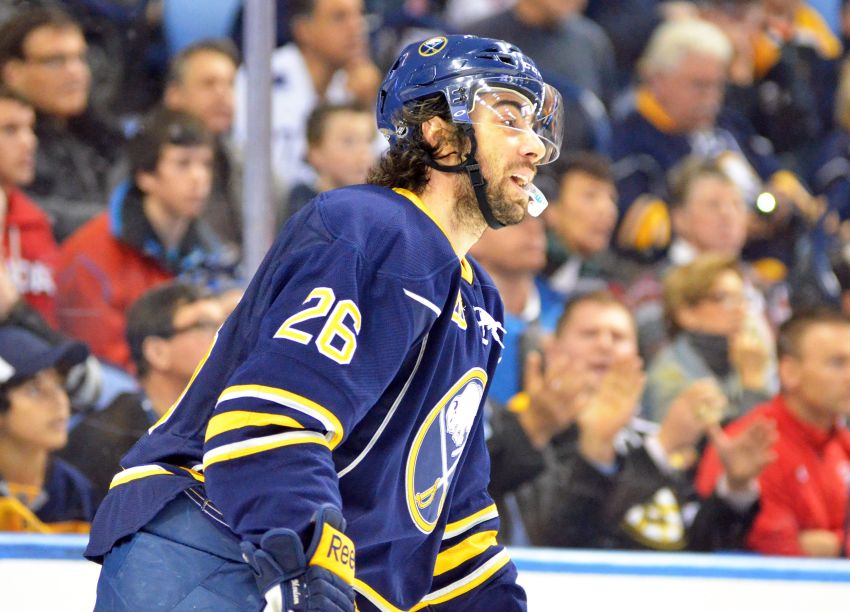 BUFFALO – Trade rumors have dogged Matt Moulson since the Sabres acquired the winger almost four months ago. But with rosters frozen for 16 days during the NHL’s Olympic break, Moulson briefly got away from the noise, rehabbed his rib injury and relaxed a bit.

“It was good to just go home and train and get healthy again and spend some family time,” Moulson said Monday inside the First Niagara Center.

Moulson and the Sabres better be recharged. They’re diving headfirst back into the season.

Teams are free to make moves again. Tonight’s tilt against the Carolina Hurricanes, a contest rescheduled after a Jan. 7 snow postponement, starts a stretch of three home games in four nights.

“It’s going to be a little difficult getting back into it after that much time off as a whole team,” Sabres defenseman Christian Ehrhoff said.

Then the trade deadline hits at 3 p.m. March 5.

“It’s a business,” interim Sabres coach Ted Nolan said. “We have to look forward to rebuilding this organization.”

By next week, the rebuilding Sabres, the league’s worst team, could be radically overhauled.

“Jobs are on the line when you’re in a place like this,” said Moulson, who will return tonight after missing four games.

Ehrhoff added: “There’s a lot of rumors surrounding this team. When you’re in last place, there has to be changes made.”

By now, Moulson’s used to hearing his name.

“People have been saying it’s going to happen for a long time,” he said. “You just control what you can control. I obviously don’t have a clue if I’m going to be traded, where I’m going to go.”

The 30-year-old said he hasn’t had any contract talks with new Sabres general manager Tim Murray but has spoken to president of hockey operations Pat LaFontaine a couple of times.

Moulson, a three-time 30-goal scorer, is confident the new regime will make the Sabres better.

“They have the right guys in place that are going to make this team good and the owners that are willing to do anything to have a successful team,” he said. “I’ve enjoyed my time here. My family’s enjoyed our time here. We’ll see what happens.”

What will happen tonight in net isn’t clear.

Miller didn’t practice Monday but has returned after representing Team USA at the Sochi Games in Russia. He played once. Backup goalie Jhonas Enroth and defenseman Henrik Tallinder, who won silver medals with Sweden, were on Miller’s flight from Russia.

“We’re banking on it,” he said Monday.

Can Miller really play after returning from a nine-hour time difference without a full practice? Imagine if he injures himself and loses trade value.

“It’ll be a different challenge, but hopefully he has some sleep and he’s somewhat awake at that point,” Nolan said.

Sabres forward Matt Ellis added: “He’s one of the most prepared athletes that I’ve come across in my career. … If Ryan’s in the cage and he gets the call, he’s a professional. He’ll be ready.”

Nolan acknowledged later on it has crossed the team’s mind to recall a goalie from Rochester.

Nolan said the team doesn’t plan to summon any skaters right now. The Sabres assigned defenseman Chad Ruhwedel and forward Phil Varone to the AHL before the break.

Twenty-five games are left in the worst season in franchise history. The Sabres have missed the playoffs the last two campaigns and four of the last six. In all those years, however, they stayed in the hunt until late.

They were essentially eliminated in October this season.

What are Nolan’s goals for these final six weeks? He wants to set a strong foundation for the future.

“You don’t win championships like the Chicago Blackhawks do overnight,” he said. “It takes a little time. It takes some growth and it takes a certain amount of working commitment by your athletes. What we’re going to try to do is set that stage now and continue building it over the summertime and get some more guys in here that are willing to do that.”

“We have to start moving in the direction to where we’re getting better each day,” he said. “I don’t think anybody in the room here is going to shut it down or not take these last 25 games seriously. It’s a matter of coming in and … trying to get out of a position we don’t want to be in.”

Ellis added: “It’s time for us to really solidify kind of an identity as a team.”