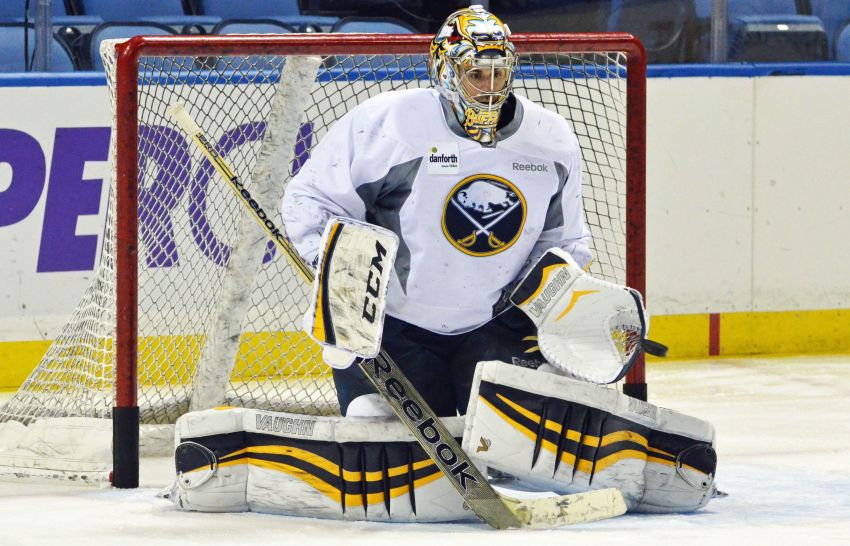 BUFFALO – Forget about the Olympics for a moment. Forget that Sabres goalie Ryan Miller will be playing in front of Pittsburgh Penguins coach Dan Bylsma tonight, a final chance to impress his bench boss at the upcoming Sochi Games.

Tonight could be Miller’s last appearance with the Sabres inside the First Niagara Center.

“Still don’t know what to say,” the franchise netminder said Tuesday. “There’s been a change here. There was a change here before. So it’s like waiting to see what the plan is and waiting to see what they have to offer. We haven’t talked about anything with regards to contracts, talked about anything in regards to trades. They’re doing their business. …

Miller, who played his first game here Nov. 22, 2002, is cognizant tonight could be the end.

“It’s a private conversation about a business transaction,” he said. “That’s what it comes down to. I’m waiting to see what kind of the plans are around here. That would kind of give a little more indication.”

The growing belief is Miller will likely want to be traded since the Sabres might be years away from contending for the playoffs, let alone the Stanley Cup, his ultimate goal. He said in December he wanted action, not words, from the team.

Does Miller know the regime’s plan?

“They can’t execute anything that they might be planning until some time passes,” he said.

Four years have passed since Miller brilliantly backstopped Team USA to within a whisker of a gold medal at the Vancouver Games. But he knows his tournament MVP award means little these days.

“I think it’s like law firms,” Miller said. “It doesn’t guarantee you any future payouts or verdicts or anything like that. It is what it is. It’s an experience I will always cherish. I can’t stack it in the net behind me. It’s not going to deflect pucks away.

“I know I have to be a more veteran, involved goaltender going in this time, playing with a certain kind of energy and confidence. I’m just kind of trying to slowly reach that level as we get ready to go.”

“That’s the one position that I am continuing to watch clips on and video of the USA guys,” he said.

An impressive performance against superstar Sidney Crosby and the high-powered Penguins could sway Bylsma.

“It’s a good team to show off against,” said interim Sabres coach Ted Nolan, who noted Miller could play Thursday in Ottawa, the last game before the break.

Miller might be the sentimental favorite to start in Sochi. His play in 2010 made him a national hero and transformed him into the face of America hockey.

“The Olympics … two weeks of kind of in-your-face hype,” Miller said. “It’s all about sports and it’s all about making celebrity out of the athlete. It kind of takes you to a different place if you can perform on that kind of a stage. Having been there, I hope to use that kind of experience and try to enjoy it and do it again.”

Winning a silver medal has left Miller feeling like he has some unfinished business.

“You’re a breath away from the gold,” he said. “It can be a hard award. It’s second place. In this league, you don’t really get that.”

Miller said his father and wife will travel to Russia. His mother and sister will stay home and watch the dog, he joked.

He’s not overly worried about security, a big concern for some athletes.

“Last time there was probably a little bit more freedom as far as where our families were at,” Miller said. “But this time my family is going to be in that area that they’re calling secure. We just talked about keeping things really simple and not making yourself stand out at all, just things you kind of do when you’re an American abroad these days.

“They’re there to watch a hockey tournament and they can catch a few more sports. I don’t think they should be too concerned.”