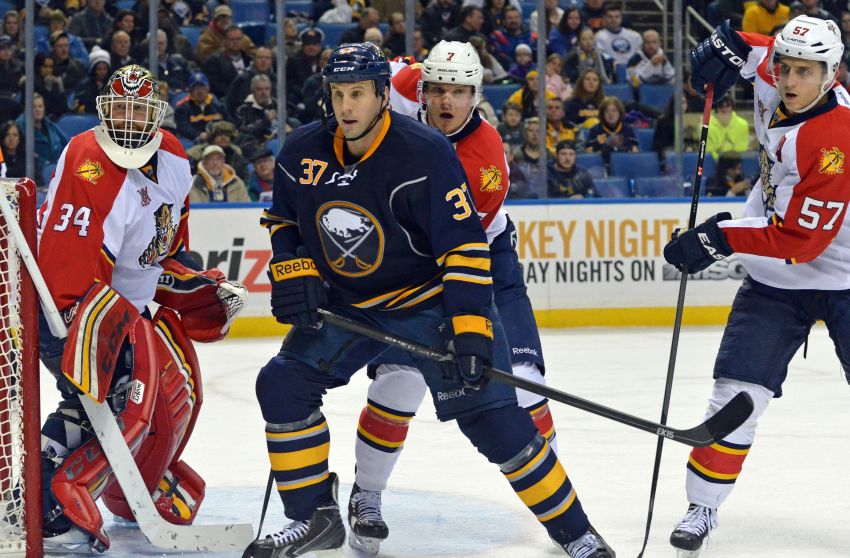 PITTSBURGH – Matt Ellis had two Buffalo Sabres skating to the crease, so even a few steps inside the blue line, the winger figured lofting a backhander toward Columbus goalie Sergei Bobrovsky was a smart move.

To Ellis, getting the puck on net – even the seemingly harmless shots – is one of the simplest ways to increase scoring.

“Coaches tell you from Day One when you pick up a hockey stick that things happen when you put the puck to the net,” Ellis, whose Sabres play the Penguins tonight, said Sunday.

Sure enough, Bobrovsky, the reigning Vezina Trophy winner, lost the puck in traffic. The Sabres led 1-0 just 2:21 into their 5-2 upset of the Blue Jackets on Saturday, which ended a five-game losing skid.

Ellis, meanwhile, scored his third goal in his 18th game since his Dec. 13 recall.

Besides his hardworking style, Ellis’ supreme hockey sense is one reason the 32-year-old has likely secured a roster spot for the rest of the season.

“I think the type of player that I am, the things I do have really kind of mesh with the message Ted’s trying to bring to the hockey team, some of the foundation work that he’s laid down here, and for me, it’s been huge,” Ellis said.

Nolan said Ellis possesses “that certain intangible that you look for in all athletes.”

“It’s the compete level. He works,” Nolan said earlier this month. “He may not be the fastest guy in the world or the best stick-handler or the best hitter or the biggest guy, but the one thing he does is he works and he competes and he pays attention to details. I think that’s why he lasted so long in this profession.”

Three goals doesn’t sound like much, but when you consider the Sabres have only 91 scores in 50 games and had received almost nothing from the fourth line before Ellis’ arrival, the contributions are huge.

Not coincidentally, Leino has zero goals.

Ellis said he’s a little surprised he has a few goals already.

“I’m definitely excited about it and happy about it,” he said. “It’s just one of those things I try to compete and play the game the right way, create offense by being smart with the puck, being simple with the puck.

“It’s always a good thing when you get contributions from your bottom line, your fourth line. It’s a big part of becoming a good team. I think that’s a big part of what we’ve been able to do here for the past month.”

This recall, Ellis’ first since the Sabres waived him in February before sending him to Rochester, has defied expectations.

Right before Christmas, the Sabres considered sending Ellis back to the AHL. He even took his equipment with him to possibly join the Amerks at the Spengler Cup in Switzerland.

But at this point, it appears Ellis has earned a regular gig. The Sabres are 7-6-5 with him in the lineup.

Ellis will keep treating each day individually, however.

He added: “You don’t get comfortable, but you make sure you bring it every day and you understand what you need to do in order to stay and be a part of things.”