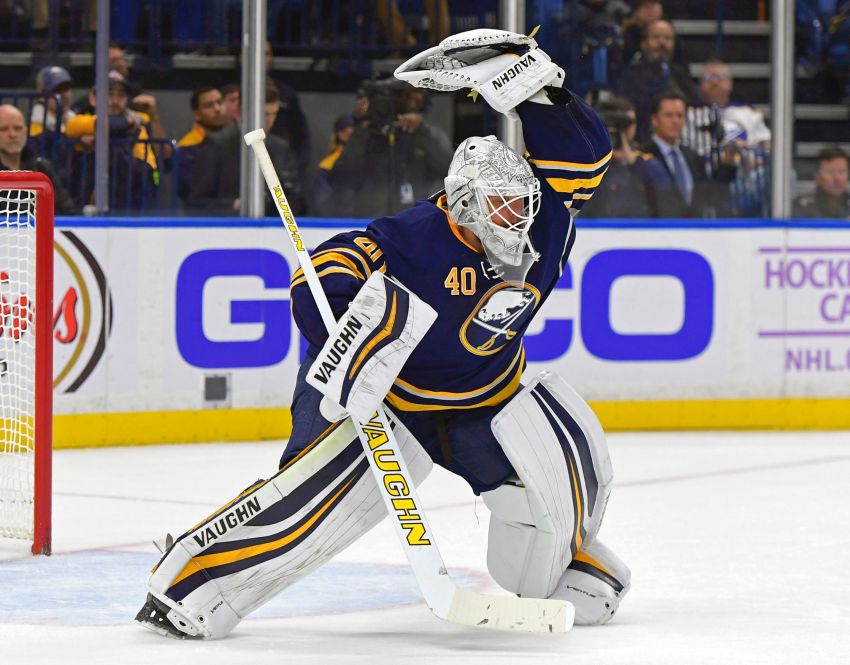 BUFFALO – Robin Lehner’s agents kept telling him to take a one-year contract. After all, the Sabres goalie could parlay another strong season into a lucrative long-term deal.

But fresh off a campaign in which Lehner established himself as the Sabres’ starter and posted the NHL’s 10th-highest save percentage, he wanted a long contract right away.

Had Tim Murray, the general manager who traded a first-round pick for Lehner, remained in charge, then perhaps the Swede would’ve received his wish.

But the Sabres fired Murray and coach Dan Bylsma on April 20. New GM Jason Botterill has no previous ties to Lehner.

“New management and stuff comes in … they want to reevaluate,” Lehner said Thursday following a late-summer workout. “I have full respect for that.”

“I’m fine with a one-year deal,” Lehner said. “I have full confidence in my abilities. Professionally, for my future, it makes more sense with a one-year (contract). … It worked out for everyone.”

However, to Lehner, 26, the upcoming season isn’t about proving himself. The young veteran – he debuted with Ottawa, believe it or not, in 2010-11 – believes he has established himself throughout the last seven years.

“Since I came here, it’s been some ups and downs,” Lehner said. “I’ve been injured. But I’ve been a steady (goalie), over 92 percent (save percentage) since I got here. I’ve been in that realm (.918 career) since I came into the league. It’s something I just want to keep improving on. Hopefully, we can just tighten it up as a team this year and get some more team success.”

Lehner, of course, morphed into more than the No. 1 goalie last season. He became a critical voice during a miserable year, saying the Sabres needed to respect their coaches, play more responsibly and showcase less individuality.

Seeing Murray and Bylsma leave, Lehner said, was “not fun.”

“You don’t get results, things like that happen,” he said. “I take that personally to myself because if I could’ve played better, maybe I could’ve put them in a better position.”

Some observers think Botterill, a rookie GM, has put the Sabres in a better position by improving the defense corps and hiring Phil Housley, a coach who wants to play fast. Botterill added three puck-movers – Victor Antipin, Nathan Beaulieu and Marco Scandella – to a unit that had difficulty getting up the ice last season.

Still, Lehner traces the Sabres’ struggles in 2016-17 to their play, not the personnel.

“The problem was we really didn’t know how to play,” he said. “The defensemen, it’s a common misconception (it was a problem). It’s how we play as a team. I was sitting watching the whole Stanley Cup playoffs last year. If you watch the good teams, look at Pittsburgh, everyone defends, everyone comes back and everyone plays as a five-man unit, and it’s fast forward and fast back in the defensive zone.

“I think that’s what Phil wants. He doesn’t want us to play slow. He wants us to play fast, and everyone attacks and everyone defends. That’s what we need to do. We didn’t do that last year. We were playing as three forwards and two defensemen.”

Like last year, when Lehner shed about 40 pounds, he stayed in Buffalo throughout the offseason, spending much of his time practicing martial arts. He appears to be a little leaner than when the season ended in April.

Lehner’s prepared to be pushed for playing time. Backup goalie Chad Johnson, who subbed splendidly for Lehner two years ago, signed a one-year deal July 1 after one season in Calgary.

Sabres winger Jason Pominville will wear his old No. 29 again.

The number, which defenseman Jake McCabe started sporting in 2014, has been given back to the former captain and NHL All-Star, the Sabres announced Monday.

Pominville, who played eight seasons with the Sabres, was reacquired from Minnesota on June 30. McCabe will switch to No. 19.

The Sabres also announced the following number changes: defenseman Casey Nelson will switch from 34 to 8, winger Nick Baptiste from 73 to 13, winger Hudson Fasching from 52 to 24, defenseman Taylor Fedun from 38 to 27, winger Alexander Nylander from 70 to 92 and winger Justin Bailey from 56 to 95.