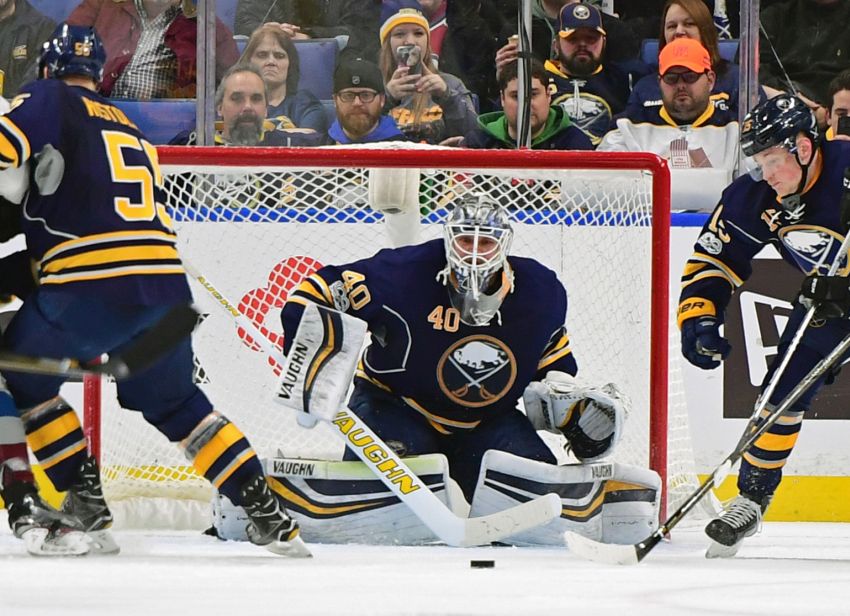 BUFFALO – Fresh off a shutout victory, Sabres goalie Robin Lehner will start again this afternoon, his sixth straight nod and 10th in the last 11 games, the NHL’s heaviest workload of late.

At his current pace, Lehner would play 56 times this season. Today’s tilt against the scorching St. Louis Blues at KeyBank Center will be his 41st game this season, breaking a professional high he set five years ago in the AHL.

“We’re going to keep riding that guy as we go forward,” Sabres coach Dan Bylsma said Friday inside HarborCenter. “Every one of these games is a huge game for us. We’re going to see Robin in there quite a bit.”

The frequency of Lehner’s action has helped the Swede, 25, find a groove and enjoy a rhythm he has only occasionally felt in the NHL.

“The more you play, the more into it you get,” Lehner said. “You see the puck better. You take a lot of thought out of the game. When you don’t play regularly, you might overthink things and hesitate a little bit. When you play a lot, you kind of just get into a flow and keep doing the things you’re doing.”

Quietly, Lehner, who was often outplayed by backup Anders Nilsson earlier this season, has transformed into one of the NHL’s best netminders in recent weeks.

“It’s what you want to do,” Lehner said. “I want to be a starter and I want to be a part of carrying this team. Just going night after night, you kind of forget the last one and just go on to the new one. I feel like I’ve been playing good, playing pretty solid all year.”

Given Lehner’s recent run, don’t be surprised if he starts again Sunday at home against Chicago, the Sabres’ final contest before their bye week. Lehner has started two back-to-back sets in the last month.

“We’ve had a chance to kind of give Robin the net here the last two weeks,” Bylsma said. “We had a back-to-back in there, he’s handled it really, really well. I think he’s gotten better and better really over the last few games … been in control.”

Lehner has performed splendidly in the last two games, stopping 62 of 64 shots. After making 39 saves in Tuesday’s 3-2 win in Ottawa, he stopped 23 shots in Thursday’s 2-0 win against Colorado, his second shutout in seven outings.

Remember, after Lehner passionately called out his teammates following Sunday’s 4-2 loss to Vancouver, he threw himself into the mix, saying he, like everyone else, had to be better.

“He’s an emotional guy,” Sabres winger Kyle Okposo said. “He’s played extremely well for us this year. We talked in the locker room. He talked among us as players. He’s played well … since he came out and said that.”

Of course, Lehner played well last year, his first with the Sabres. But a high ankle sprain he suffered opening night cost him three months and eventually forced him to undergo season-ending surgery.

He spent the summer training in Buffalo and shed about 40 pounds. That work – Lehner couldn’t really exercise the previous offseason as he recovered from a concussion – is paying off now, he said.

“It was more just a thing for the team to see I am committed,” Lehner said. “You know what? I have a special style as a goaltender. I’m very energy efficient on the ice. I said it before and I’ll say it again, my weight, my physique – whatever – I can play with both, because the biggest part of my game is my brain.

“It’s reading plays, being in position and using my reflexes. I don’t move that much on the ice. I have strong legs … to move across. I’m competitive. I know I can play at this level.”