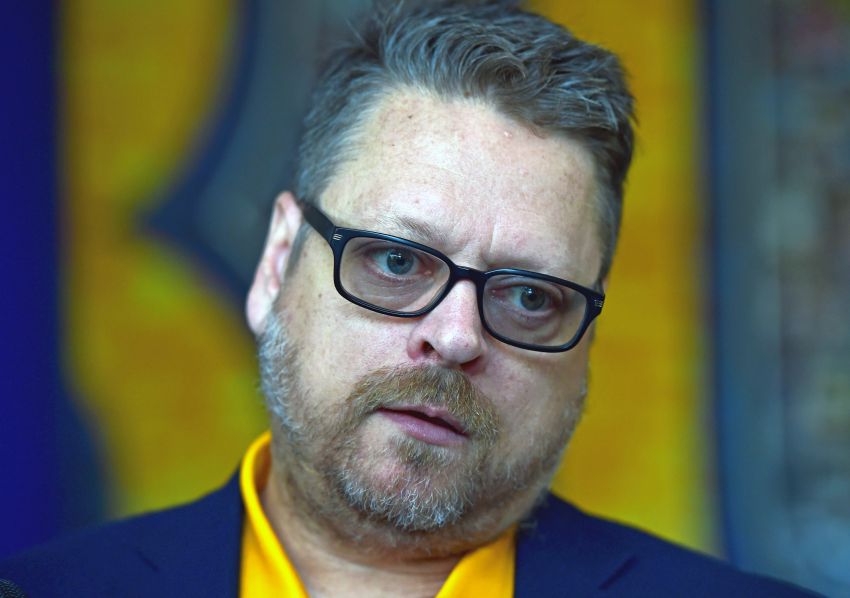 No one, of course, has more invested in Vesey than Murray, who traded a third-round pick for the Hobey Baker Award winner’s rights on June 20, a deal he has called a “gamble.”

If Vesey signs, Murray might have a first- or second-line winger to skate beside Jack Eichel or Ryan O’Reilly. If Vesey, 23, looks elsewhere, Murray must search for more scoring.

Still, even Murray doesn’t discuss Vesey, who refused to sign with the Nashville Predators, as much as others around town.

“I’ve talked about this literally less than anyone else in Buffalo,” Murray said Tuesday inside HarborCenter. “I hear the guys on the radio and people are mad. This is like top-end news. I think I paid less attention to this than anybody.”

Murray and coach Dan Bylsma visited Vesey last week in Massachusetts. While Murray said the meeting went well, he understands after waiting so long to turn pro, Vesey likely wants to test the market. His camp has repeatedly said he plans to become a free agent.

“If he wants to come in here, or if he wants to reach out to us and have another meeting, then we’re there. But for me, this is his court. I don’t sit at home and speculate about this. He’s either going to sign here or he’s not.”

If the Sabres lose the Vesey sweepstakes, Murray joked “you guys will call me a dummy.”

The Sabres have another intriguing option up front for the first or second line, talented winger Alexander Nylander, the eighth overall pick.

Throughout development camp, which wrapped up Tuesday, Nylander dazzled, showcasing his soft hands and a repertoire of dynamic moves. The Swede often looked unstoppable during his shootout attempts.

So could Nylander, 18, be in the NHL come October? It’s possible, Murray said. The Sabres have four options for Nylander: the NHL, a return to the junior Mississauga Steelheads, Europe or the AHL.

“There’s all kinds of scenarios. He can fit into any one of them. He’s just high-end talent, high-end skill. He’s going to be a really good NHL player. It’s a matter of time.”

Vesey’s status and the July 1 signing of winger Kyle Okposo to a seven-year, $42 million contract have overshadowed the rest of the team’s summer. The Sabres need to make more moves.

Not surprisingly, Murray wants to add one or two defensemen, “Whether it’s an NHL D or an American League D or a depth (one),” he said. Only eight in the organization have NHL experience. Right now, the blue line is woefully thin.

“Obviously, free agency has slowed down, but there are still guys out there,” Murray said. “I’ve got to regroup with the scouting staff here and just make some decisions. Ideally, at least one more signing would benefit the organization.”

One available veteran defenseman, Carlo Colaiacovo, played 36 games with the Sabres last season. Colaiacovo, 33, has said he would embrace a depth and mentoring role like the one he just enjoyed. Colaiacovo’s camp recently spoke to Murray about returning.