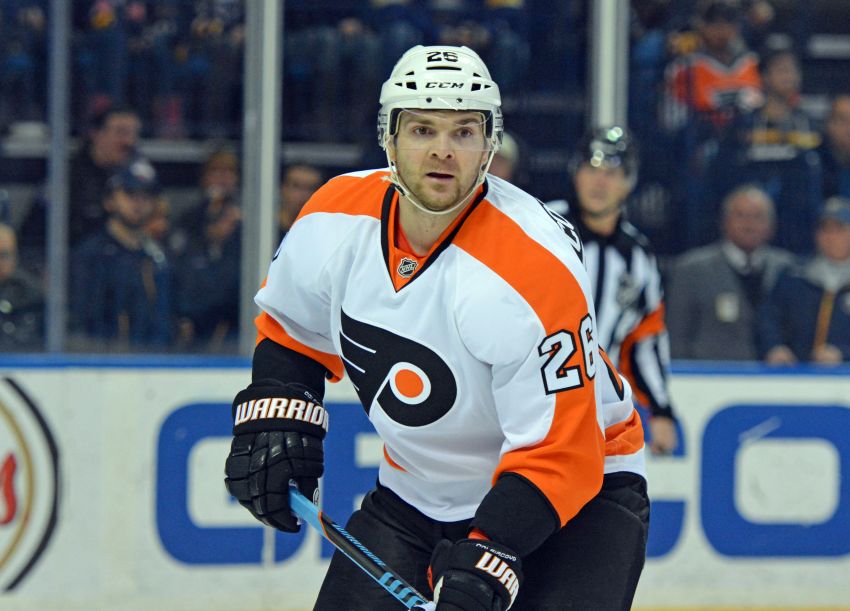 A year ago, Colaiacovo couldn’t find work. As the summer dragged on, the free agent became uneasy. The stress wore on him.

Colaiacovo eventually decided to bolt to a Russian club in the KHL. But the contract took so long to consummate a one-year-deal with Philadelphia materialized in October before he could leave.

The 32-year-old played sporadically with the Flyers, making only 33 appearances. Still, he performed well enough the Sabres, who need veteran depth on the blue line, offered him $900,000 just two days into free agency. He made $625,000 last season.

Being wanted is a special feeling.

“When Buffalo reached out, it was a feeling of excitement,” Colaiacovo told the Times Herald by phone. “I’m really happy that everything worked out the way that it did.”

Colaiacovo views the Sabres as one of the NHL’s top young clubs. He’s confident general manager Tim Murray’s bold moves – minutes after drafting Jack Eichel second overall, he acquired No. 1 center Ryan O’Reilly, then signed him to a seven-year contract Friday – have “set the team up to take the next step this year.”

He can’t wait to meet owner Terry Pegula and play for coach Dan Bylsma. Being so close to his Toronto home will also provide extra motivation.

“I’m excited about this team, and I’m hoping that a lot of people in Buffalo are as well,” Colaiacovo said. “I think it’s an opportunity to start fresh.”

Colaiacovo experienced a similar situation in 2008, when the St. Louis Blues acquired him from the Toronto Maple Leafs. The Blues were young and climbing out of a rebuild. He spent some of his time there partnered beside Alex Pietrangelo, who quickly morphed into one of the NHL’s top defensemen.

“I was able to help them get over the hump,” he said. “I’m hoping I can provide this team an opportunity to get there as well.”

Mentoring, Colaiacovo said, is one of his greatest assets. He’s happy to help some of the Sabres’ young defensemen.

Colaiacovo, the 17th overall pick in 2001, could be the Sabres’ fifth or sixth defenseman. Right now, Zach Bogosian, Josh Gorges, Mark Pysyk and Rasmus Ristolainen are probably the top four. The Sabres also have Mike Weber and signed Matt Donovan, who spent all of last season with the New York Islanders, last week. Murray, however, might acquire another defenseman.

“I have the potential to be a top-four guy, whatever role is asked of me,” Colaiacovo said. “I think I can play power play. I think my biggest strength is moving the puck.”

Colaiacovo has 33 goals and 152 points in 434 NHL games. Injuries have dogged him for parts of his career – he has battled a concussion and hand, knee, shoulder and other ailments – although he played 64 or more games every season from 2008-12.

“It’s an unfortunate criticism, but the past is the past,” Colaiacovo said about the perception he’s injury-prone. “Since I’ve turned 30 years old, I’ve changed the way that I train and I’ve change the way I do a lot of things, and I haven’t had to deal with anything the last couple of years. For me, that’s all I focus on. I can’t turn the clock back and go back to the past. What’s happened in the past is staying in the past for me.

Varone, who had three goals and five points in 28 games last season, likely wants an AHL raise. He only had a $62,500 deal with the Rochester Americans last season.

The Sabres gave big money to some AHL stars last week, awarding center Cal O’Reilly a one-way, two-year deal worth $700,000 a season and defenseman Bobby Sanguinetti a two-way deal that will pay him $300,000 with the Amerks.

Varone has led Rochester in scoring two straight seasons, compiling 15 goals and 44 points in 55 games last season and 18 scores and 61 points in 69 appearances in 2013-14.