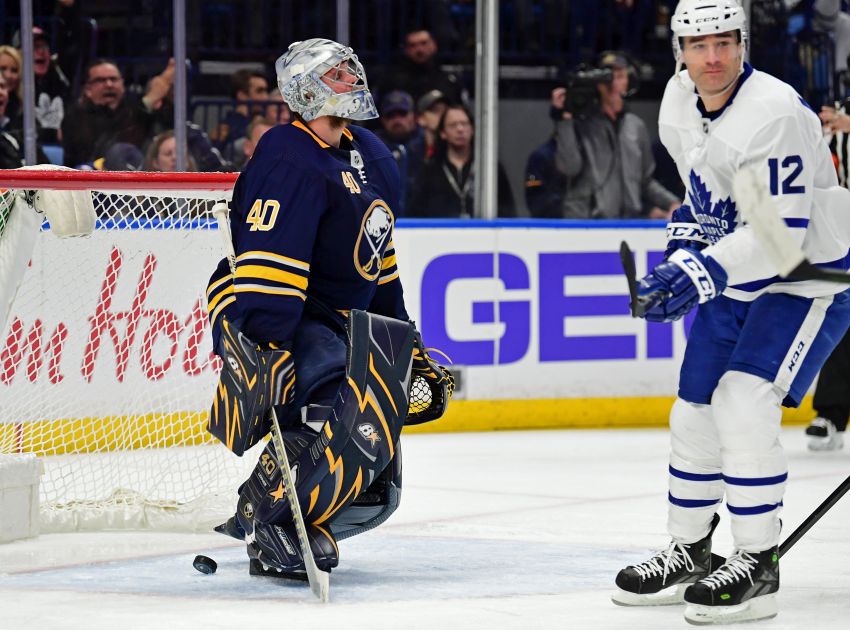 Robin Lehner reacts to allowing a goal last season with Toronto’s Patrick Marleau in front of him. ©2018, Hickling Images

DALLAS – In the coming days, the Buffalo Sabres could confirm what has been widely speculated for months: goalie Robin Lehner won’t be back for a fourth season.

If the Sabres can’t trade Lehner, rather than making a $4 million qualifying offer to the restricted free agent by Monday’s deadline, they might simply walk away, making him unrestricted.

With that, one of the most interesting athletes in Buffalo’s recent history will leave town.

Given the team’s old regime acquired the fiery Lehner, his weak 2017-18 season and the end of Linus Ullmark’s AHL apprenticeship, all signs point to the Sabres moving on.

Late last winter, the Sabres recalled Ullmark and awarded him action, a clear sign they valued their top goaltending prospect over Lehner.

But that was evident almost a year ago, when they re-signed Lehner to a one-year, $4 million contract. Even after he posted a sparkling .920 save percentage in 2016-17, the Sabres refused to go beyond a single season.

It’s unclear how many teams would be interested in Lehner. If the Sabres could’ve traded him at the deadline last winter, they likely would’ve completed a deal. While he tended some fine goal at times in Buffalo – he quietly compiled a strong season two years ago – he has never consistently performed like a top-level starter.

The Swede also seems ill-suited for a backup role, which could deter potential suitors. He doesn’t lack confidence, an attribute teams probably like in their netminders.

Still, how many No. 2 goalies are as outspoken as Lehner?

He is often critical of his team’s play. While he makes sure to include himself, how many teammates like being criticized by the goalie? That likely rankles some players.

Backup goalies often stay quiet and push the starter, going out on the ice before and after practice for extra work to stay sharp since they play so infrequently. It might take a new level of commitment for Lehner thrive in that role.

Of course, Lehner’s body of work – he’s 72-95-35 with a 2.82 goals-against average and a .915 save percentage in 219 career outings – is solid considering he has played for some bad teams. He possesses plenty of untapped potential at age 26. He might get scooped up.

Former Sabres general manager Tim Murray liked Lehner so much he traded the 21st overall pick to Ottawa in 2015. Remember, they won a Calder Cup together in 2011 when Murray ran the Senators’ AHL affiliate in Binghamton.

The high price tag irked many fans, who still haven’t gotten over the Sabres parted with a first-rounder in a deep draft.

Hopefully at least some appreciate Lehner’s candor. In an age where athletes usually offer very little, his authenticity is refreshing. He will about talk anything – hockey, culture or life – and always has a strong opinion about it.

It can be hard to walk by Lehner without him striking up a conversation. He is genuine, perhaps to a fault.

So the Sabres almost certainly need another goalie. Chad Johnson, last season’s backup, made it clear in April he wasn’t too interested in returning.

The free agent market is, well, slim. Don’t be surprised if general manager Jason Botterill swings a deal to acquire one at the NHL Draft this week or in the coming days or weeks.

Who fits that bill among upcoming free agents?

Hutton, 32, has mostly been a backup throughout his five-year NHL career, although he played 40 games as a rookie with the Nashville Predators in 2013-14.

Last season, Hutton quietly morphed into arguably the league’s best No. 2, posting some scintillating numbers – 17-7-3, 2.09 and a league-high .931 – in 32 appearances with the St. Louis Blues. He could be the Sabres’ best option.

Lehtonen, 34, started regularly his entire career until last season, when he played 37 games with the Dallas Stars. While the Finn has enjoyed some strong seasons, he has never reached his potential after the Atlanta Thrashers picked him second overall in 2002.

Hutchinson, 28, was the Winnipeg Jets’ backup for three seasons before being bumped to the AHL last year. Back in the minors for the first time since 2013-14, Hutchinson showed he has probably outgrown the AHL, posting some stellar numbers – 17-5-1, 2.08 and .935 – in 26 contests with the Manitoba Moose.

Hutchinson could be a good fit for the Rochester Americans, especially if he sees an opportunity to earn recalls.

The Sabres will open the 2018-19 season on Oct. 4 against the Boston Bruins at KeyBank Center, the league announced Wednesday.

The rest of the schedule will be released at 4 p.m. today.

The Sabres haven’t opened a season at home against the Bruins since 1974.

Paetsch, 34, compiled nine assists in 22 games last season. He began his career in the Sabres organization, playing parts of five seasons with the big club.