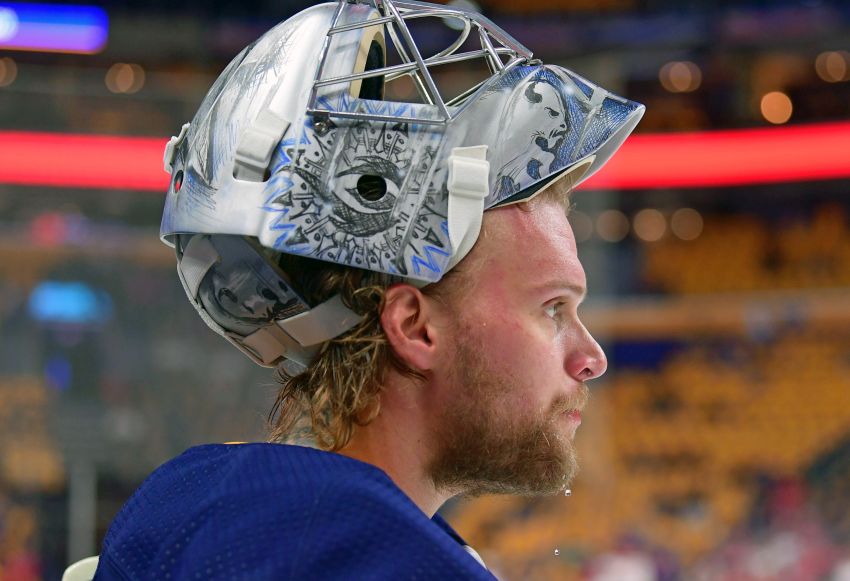 With a little luck or a few stronger minutes here or there, the Sabres could’ve won all three tilts.

A lot changed for the Sabres over a six-day stretch. The NHL’s 30th-ranked team suddenly became much more competitive and started scoring some timely goals.

Meanwhile, Lehner stood tall, posting a .940 save percentage in that span.

Sabres coach Phil Housley sees signs Lehner, 26, is on top of his game.

“He’s just focused, you can see it in his preparation,” Housley said Monday. “He’s dialed in, he controls his rebounds, he’s square to the puck, he’s in good position, he lets pucks hit him. He’s a big guy. It just shows. I think he has a lot of confidence right now.”

For one of the few times this season, the Sabres possess some momentum entering tonight’s contest against the Ottawa Senators inside KeyBank Center.

Lehner, of course, will likely start against his old team, his fourth straight nod and 24th appearance overall. Right now, the Swede’s on pace to play a career-high 63 games, four more than last season.

“I’ve felt in a rhythm,” Lehner said. “It’s nice of the coach to keep putting me out there.”

While Lehner has some notable faults – he’s the league’s worst shootout goalie, for example – his 103-game Sabres career has mostly been solid.

A year ago, he posted a splendid .920 save percentage on a last-place team. This season, however, his numbers dipped as the Sabres imploded early.

Still, Lehner has insisted all year he feels fine, something he reiterated Monday.

“(It’s) obviously hard to find a bright spot when you’re losing, it really is,” he said. “But I’ve thought a lot of my games this year have been good and (I’m) just trying to keep building on it. I think we’ve been playing better.”

He added: “I’ve felt solid. Obviously, there’s goals here and there you want to have. But I felt like most of the games I’ve been in have been one-goal games, we’ve been in them.”

In Friday’s 3-2 overtime loss in Chicago, the Sabres led 2-1 before Tommy Wingels scored short-handed with 3:22 left. After Jack Eichel missed a penalty shot in overtime, Gustav Forsling scored on the Blackhawks’ 51st shot.

Following that goal, Lehner lost his cool as he walked to the dressing room.

“Just the emotion of winning right now is such a boost,” Lehner said. “When we win a game, it feels so good right now. I think if we do a few things, maybe just push that little bit extra, I think we could’ve come out 3-0 this road trip.”

The Sabres play four of their next five games at home before the World Junior Championship will force them away for seven straight contests.

Lehner has quietly been one of the NHL’s best home goalies this season, going 3-6-1 with a 2.02 goals-against average, a .932 save percentage and one shutout.

Lehner has been yanked twice on the road, including a Nov. 4 outing in Dallas in which he allowed three goals on seven shots in barely 10 minutes.

“If I have one more good game on the road, I think my numbers are going to be up there,” Lehner said. “It’s still too early in the year, the numbers are changing drastically. … It all evens out. Your numbers land somewhere they’re supposed to be.