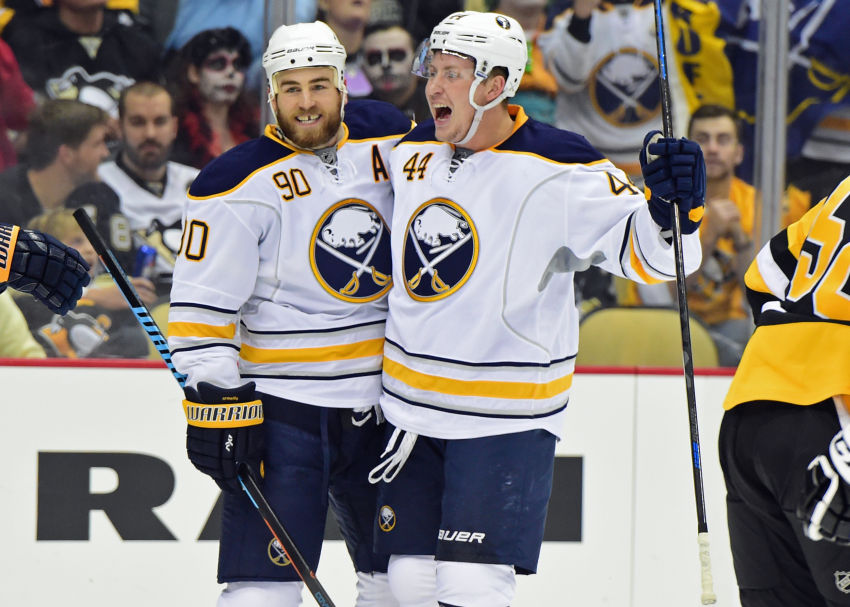 The big bodies are known more for their grit than their goal scoring.

“You don’t see Deslauriers and Foligno and call it a first line,” coach Dan Bylsma said Saturday inside HarborCenter after the Sabres prepared for tonight’s road contest against the New York Islanders. “But it is for us right now.”

Bylsma’s makeshift No. 1 trio has performed like a top line for two games, getting two goals from Deslauriers while generating loads of time in the offensive zone. Ennis will test his lower-body injury in the pregame warm-up tonight, Bylsma said. If he can’t go, the trio should play a third game together.

Much of the line’s effectiveness comes from the players’ willingness to stick to what they do best. O’Reilly, who has 10 points in the last five games, is the slick playmaker. Deslauriers and Foligno bang bodies and create space.

“They played within their game and within their strengths and (have) been effective at doing it,” Bylsma said. “They … set the tone of the game right off the hop physically. They can skate.”

Deslauriers added: “My role’s always been the same. … I need to just make some space for Ryan. He’s going to be there to support the puck, and when I finish my hits, there’s a loose puck there, I’m going to grab it.”

Deslauriers, the left winger, earned a promotion beside O’Reilly on Tuesday in Philadelphia after Kane sprained his MCL. Foligno joined them when Ennis couldn’t play Thursday in Pittsburgh.

“Playing with those guys, their size, their physicality, I kind of knew there was going to be a bit more room,” O’Reilly said Friday.

Bylsma joked last week he didn’t want to say it too loudly, but Deslauriers, who has nine NHL goals, possesses some finishing ability. He responded by scoring in consecutive outings for the second time in his 110-game career.

He converted O’Reilly’s feed in front in the Sabres’ 4-3 loss to the Penguins. Then in the Sabres’ 3-1 win Friday against Philadelphia, he beat his man to the net and connected on O’Reilly’s pass. Foligno’s dish to O’Reilly as he left the Buffalo zone started the play.

“I don’t have the skill to do nice plays,” he said. “But I know I have a good shot, so I just need to use it to my advantage. I know I can keep up with this pace. On that last goal, Ryan was flying. I just came out of the box.”

Deslauriers left the box, as usual, with a head of steam.

“(He’s the) Energizer Bunny for us,” Foligno said. “He doesn’t stop. This guy’s awesome. It’s good to see him get rewarded, because we’re all going to the net and now pucks are going in for us.”

They’re going in because of O’Reilly’s dynamic all-around game. Bylsma gave O’Reilly a day off Saturday – actually, he forced him – after skating him 26 minutes, three seconds Friday.

“He said he would’ve been all right if he had (practiced),” Bylsma said. “I said no.”

O’Reilly began Saturday fifth in the NHL with 13 points. Yes, it’s still early, but that’s a 97-point pace over an 82-game season.

“Ryan has probably had his best offensive games five-on-five with those two guys,” Bylsma said.

Foligno, like his teammates, had heard about O’Reilly’s abilities before the Sabres acquired him from Colorado on June 26. Seeing it up close, however, is different.

“I think the biggest thing with Ryan is he’s probably the hardest worker I’ve ever seen on and off the ice,” Foligno said. “I mean, this guy doesn’t stop. He played 26 minutes (Friday). We had to tell him to take a day off today.

“That’s just the type of person he is, and I think that just generates the stuff on the ice that he does. He’s a hard worker in both zones. You can’t say enough about that guy. He’s a great teammate.”

Gorges was given a five-minute boarding major and ejected.