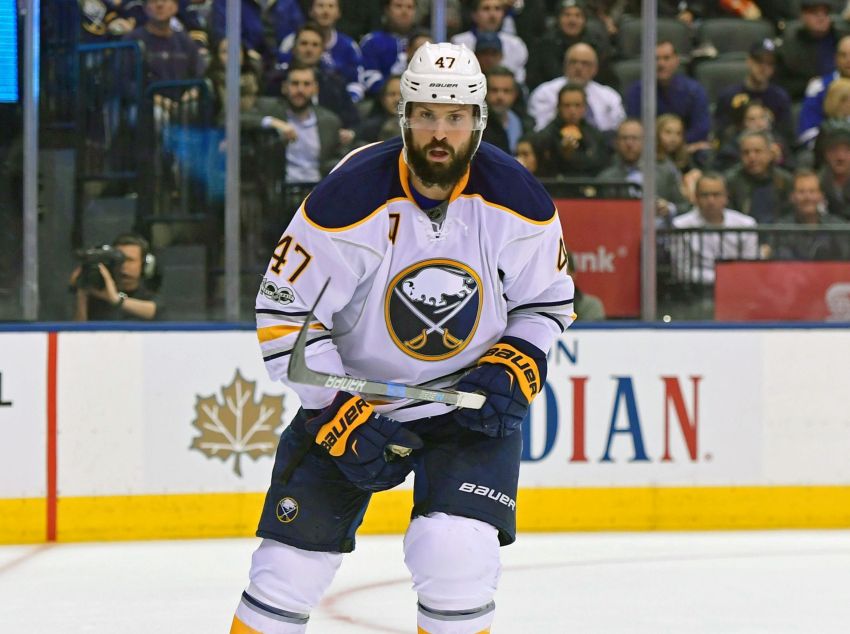 BUFFALO – In 25 years as a professional coach and player, coach Dan Bylsma said he had never seen it before. In Saturday’s 3-2 overtime win in Montreal, the Sabres dressed five right-handed defensemen.

“Kind of an odd situation,” Bylsma said Monday inside HarborCenter after the Sabres prepared for tonight’s road tilt against the Nashville Predators.

Unlike other sports, lefties are more plentiful in hockey. According to the New York Daily News, a whopping 62 percent of skaters last season shot lefty (559).

The Sabres usually balance their pairs with a lefty and righty. But injuries to three lefties – Josh Gorges, Dmitry Kulikov and Jake McCabe – forced them to use the odd defense lineup against the Canadiens.

The only lefty was Justin Falk, the seventh defender on the depth chart.

“It was a really strong game from those six guys back there,” Bylsma said.

Naturally, players are most comfortable staying on the side they shoot.

“Talking with the guys about whether they played the left or are comfortable on the left, not a lot of hands went up,” Bylsma said.

Still, against the first-place Canadiens, the defense played aggressively, moving up and down the ice and scoring two goals in a game, incredibly, for the first time this season.

“I was really surprised to see, after the first 10 minutes of the game, how our D executed with the puck, how they joined the play,” Bylsma said.

Sabres defenseman Cody Franson added: “It’s a product of us really buying into what we set out to do. We’ve tried to keep our game plan simple, make ourselves a little bit more predictable in terms of our forwards knowing what we’re going to do with the puck.”

The speedy Massena native showcased his burst, a strong sign he has found a groove. He drew a first-period hooking penalty after pinching in and zooming to the net.

“You saw that the second half of the Detroit game (Friday) as well,” Bylsma said. “When we got down to short numbers on our bench, Zach ended up playing a lot more in that second and third period against Detroit. You see that joining of the play, speed and energy he can play the game with.”

Perhaps most impressively, Bogosian mostly played on the left side with Franson, who also scored.

“It takes a little while to get used to,” Bogosian said. “But it has its pros and cons. Offensive zone, it’s pretty fun. But neutral zone, it can be a little tricky. You’re trying to find open guys. You’re only facing one way. But it’s a lot of fun to be able to play the left side and get more minutes.”

With all the injuries recently, Bogosian’s ice time has shot up. He played a season-high 29 minutes, 51 seconds in Friday’s 3-2 overtime win against Detroit.

“I’ve been getting more minutes, more opportunities,” Bogosian said. “That gets you in the game a little more. I’ve always tried to use the more minutes to create opportunities and be able to use my speed and that.”

Bogosian or another righty might find himself back on his natural side tonight. Kulikov, out the last 12 games with a lower-back bruise, practiced Monday and could return this week, Bylsma said.

“See how he responds to that,” Bylsma said. “But it bodes well for him seeing some time this week.”

The Russian has left the lineup three times. He has one assist in 20 appearances and has missed 26 games.

The Sabres also play Thursday in Dallas, their final game before the NHL All-Star break.

Bylsma said Kulikov skated hard on his own over the weekend. Kulikov couldn’t talk following practice because an errant stick hit him in the mouth.

If Kulikov returns, rookie Casey Nelson would likely sit out.