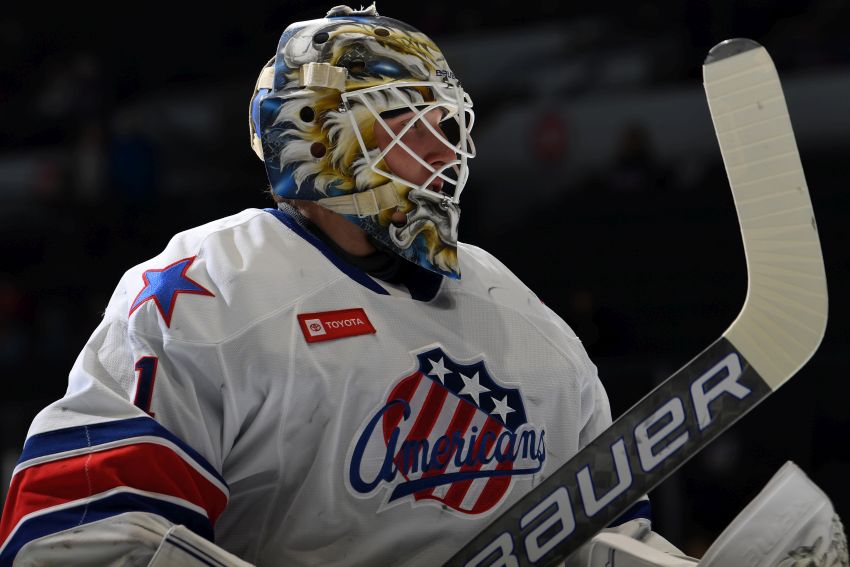 ROCHESTER – When Matthew Peca jumped off the bench, one-timed a rolling puck and beat Americans goalie Ukko-Pekka Luukkonen under his blocker, it felt like the Springfield Thunderbirds’ second goal in four minutes might be a killer.

Luukkonen, 23, knew the go-ahead goal from the left circle early in Tuesday’s second period was suspect.

“It was a rolling so I kind of got surprised at that, dipped a little bit so it went underneath by blocker,” Luukkonen said after the Amerks’ 3-2 shootout win moved them into the AHL North Division’s final playoff spot. “It’s one of those if that happens, you kind of want that back.

“There’s no reason to look back on the situation. Even though if you make a good save or there’s a bad goal or something, it doesn’t really matter.”

Luukkonen settled down after Peca’s goal, stopping the final nine shots he faced to help the Amerks earn a critical victory. For the Finn, who has endured a wildly inconsistent season, Tuesday’s effort was the latest in a series terrific outings.

“That second goal is one he’d probably want to have back, and I thought he remained extremely calm and poised even when we were now playing from behind, which I thought was a great sign,” Amerks coach Seth Appert said following the game at Blue Cross Arena.

Right now, Luukkonen, a prospect labeled as the Buffalo Sabres’ goalie of the future, might be enjoying his best stretch since becoming Rochester’s No. 1 goalie last season.

“When I’ve been playing well, kind of find of the right depth in the goal and positioning has been a key to playing better and playing well,” Luukkonen said last Friday. “I think that’s one of the things if you lose too many games, kind of the game might get away from you.”

But the 6-foot-4, 196-pound Luukkonen has finally found a groove as he’s entering the biggest weekend of his three-year pro career.

“He looks bigger, he’s got more swagger, more presence in the crease right now in this last stretch, which is great to see,” Appert said last Friday of what has recently changed in Luukkonen’s game.

Tonight’s road contest against the Utica Comets kicks off a stretch of three games in three days that could decide the Amerks’ playoff fate. Luukkonen, who has started four straight contests, will likely play two of the games.

COVID-19, injuries and other factors have wreaked havoc on Luukkonen’s development, and he hasn’t found much of a rhythm over the last two seasons.

“He was really good at the beginning of last year before COVID, he had a really good stretch there,” Appert said. “He’s had other good stretches (with Rochester). But there has been some inconsistency, but I think there’s been a lot of things that have played into that.”

Luukkonen performed inconsistently earlier this season, winning AHL Player of the Week honors in the midst of a slow start. Still, when the Sabres lost goalies Craig Anderson, Malcolm Subban and Dustin Tokarski, they had to recall him in early December.

The youngster seized his chance, recording a 2-5-2 record with a 2.74 goals-against average and a .913 save percentage in nine games before suffering a lower-body injury Jan. 11.

But when Luukkonen recovered, the Sabres sent him back Rochester, where he has remained since early February.

Luukkonen struggled following his return, allowing four or more goals eight times in a 13-game stretch in front of an Amerks defense corps that has been decimated by injuries and recalls.

Appert said he never lost faith Luukkonen would turn around his game.

“There’s an ownership to the position of goaltender that is very difficult. You have to accept the fact that it’s kind of all on you sometimes. And I think he’s taken ownership and responsibility for his role on the team.”