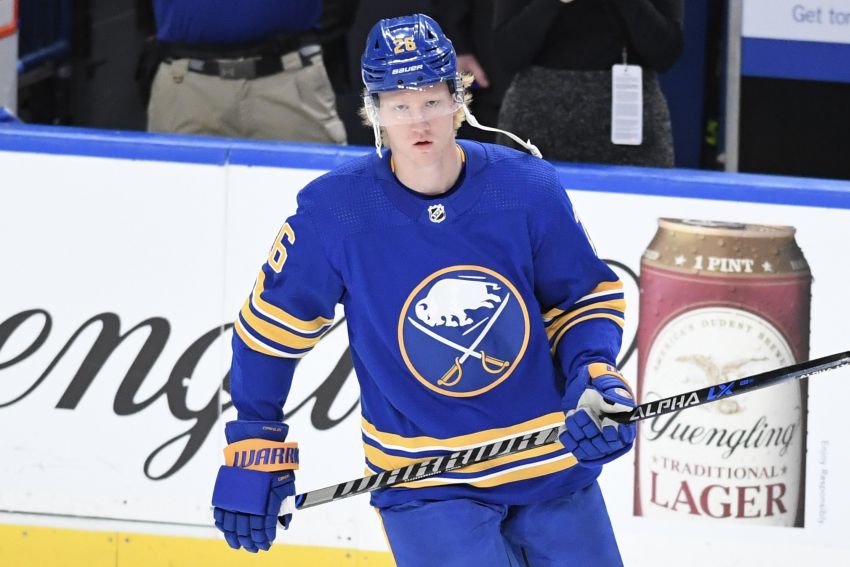 Rasmus Dahlin has been on a tear for Buffalo. ©2022, Micheline Veluvolu

BUFFALO – You have to go back 11 years to find the last time the Sabres showcased an offense this exciting and prolific.

“Our offensive game is going to continue to evolve,” Sabres coach Don Granato said following Friday’s practice at KeyBank Center. “Actually, it’s a longer process than any other thing, and I think … as we’ve gotten lineup continuity, we’ve been able to build and build.”

For much of the winter, as the Sabres battled a rash of COVID-19 cases and injuries, they were trapped in what Granato called “survival mode.” Then when the lineup reached full strength, they began to turn a corner.

“We’re finally in the part where we have that stability and foundation to build, and … more offense will be the result, I’m sure of that,” said Granato, whose upstart Sabres have compiled a 14-8-3 record in their past 25 outings.

That foundation for next season is just about set. Incredibly, it’s possible every skater who played in Thursday’s 5-2 road win over the New Jersey Devils could return.

“We can start next year building immediately upon the foundation that we’ve been able to put in this year, because our player personnel is going to look very similar to what we had in the lineup last night – very, very similar,” Granato said.

So the offensive output the Sabres keep displaying could be a harbinger for next season. Some of the Sabres’ younger players who have enjoyed breakout years – defenseman Rasmus Dahlin and center Tage Thompson, for example – should only keep improving.

“We’ve scored more goals lately, and it comes with growth,” Dahlin said. “We play as a team now, we put pressure on their players, we get the puck back, our forwards are confident, too. It’s a little bit of everything, I think.”

Center Dylan Cozens traces the Sabres’ offensive surge to “guys getting more confidence as the year goes on.”

“As we start winning games, guys start to kind of feel themselves a bit and the puck starts going our way a little bit more,” said Cozens, who has scored 13 goals this season. “So I think it’s a lot of that. I think it’s mostly confidence.”

Right now, Dahlin, having registered 12 goals and 52 points in 77 games this season, is brimming with confidence. He’s the Sabres’ first 50-point defenseman since Garry Galley in 1995-96.

“We’re pushing … to get our defensemen more active offensively, and you’ve seen Dahlin’s numbers increase over the last month, and that’s been a real point of emphasis,” Granato said. “You see it in our practices, incorporating the defense, more active. And it’s more than when you activate your D, it’s more scoring out of your forwards as well.

“So, yes, Dahlin’s numbers will improve, but so will the offense.”

The American has scored a team-high 10 power-play goals, morphing into a dynamic presence from the circle.

The Sabres’ power play has been lethal since March 27, converting 40 percent of its chances, the league’s highest number.