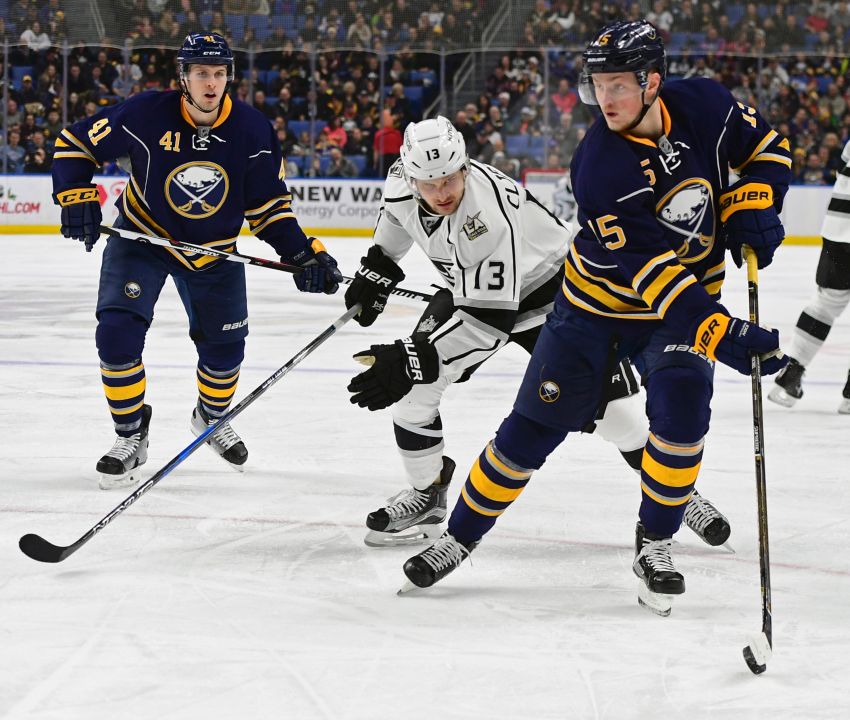 BUFFALO – For almost 30 minutes Tuesday, KeyBank Center felt like, well, just about every other Sabres home game this season.

The 18,375 fans barely made a peep as the home team, as it often does, generated little offense and fell behind 2-0 to the Los Angeles Kings.

Those goals irked Ryan O’Reilly, especially the first one, a nifty score in which Kings star Anze Kopitar blew by the Sabres center.

“I was just getting frustrated,” O’Reilly said following the Sabres’ wild 6-3 come-from-behind victory. “The first goal was clearly my fault, and then being out there again, I got to create offense and not get scored on.”

So almost 9:30 into the second period, O’Reilly grabbed a loose puck on his backhand just below the goal line and skated into the right circle, where he beat Kings goalie Peter Budaj high.

“The whole shift he was taking over and taking the game on his stick,” Sabres coach Dan Bylsma said of O’Reilly’s dynamic one-man effort. “He … ignited the rest of our guys, the rest of the team. We kind of steamrolled from there.”

The Sabres also scored on their next two shots, getting goals from Jack Eichel and Brian Gionta 12 seconds apart.

The building, for one of the few times this season, buzzed with excitement the rest of the night.

“Once we kind of got on a roll, we stayed with it,” O’Reilly said. “Goal after goal, you could feel the life in the building. Everything just kind of changed. We took the game over. I think that’s us being mature, taking advantage of those momentum swings and finding ways to score goals.”

After Gionta’s team-leading seventh even-strength goal at 13:48, the Kings yanked Budaj for Jeff Zatkoff, who promptly allowed another Eichel goal.

It all started with O’Reilly’s effort.

Eichel: “(O’Reilly’s) our leader for a reason.”

The Kings narrowed it to 4-3 early in the third period. Still, the Sabres showcased a killer instinct. Eichel’s nifty feed to Evander Kane sealed the game. Then Sam Reinhart added an empty netter.

“We’re feeding off each other,” O’Reilly said. “Each line was going out there, being physical, possessing the puck. There was little plays opening up.”

The Sabres, who improved to 11-11-6, hit the six-goal mark for the first time at home this season and only the second time overall. They’ve been held to one goal or less in nine of their 15 games here.

Scoring, of course, covers for other mistakes.

“I always think that’s the case when you’re getting one or less goals a game, your every mistake is magnified,” Bylsma said. “We’ve had a few of those kerfuffles that cause goals. … It was a credit to the guys they took charge of the game and took the game over and erased whatever mistake there was earlier on.”

Sabres goalie Robin Lehner, meanwhile, won his first game in six appearances, stopping 30 shots. The Swede, thanks to only 14 goals of support, began the night just 1-6-3 in his last 10 decisions.

“It’s massive for him,” Bylsma said about Lehner’s first win since Nov. 21. “I think Robin would tell you that wasn’t his best game, but that was his best win.”

After Jeff Carter’s breakaway goal made it 2-0, Bylsma said he almost wondered if Lehner was “ever going to get a goal to win a hockey game.”

“The guys came back for him,” Bylsma said. “The guys got the goals for him, but at the same time, he had to make some saves … to preserve the victory.”

Lehner added: “We’re working on our game. I’m working on my game. I’ve been feeling pretty good this year. Getting some production today was pretty nice.”

Tuesday kicked off a nine-game road trip for the Kings.