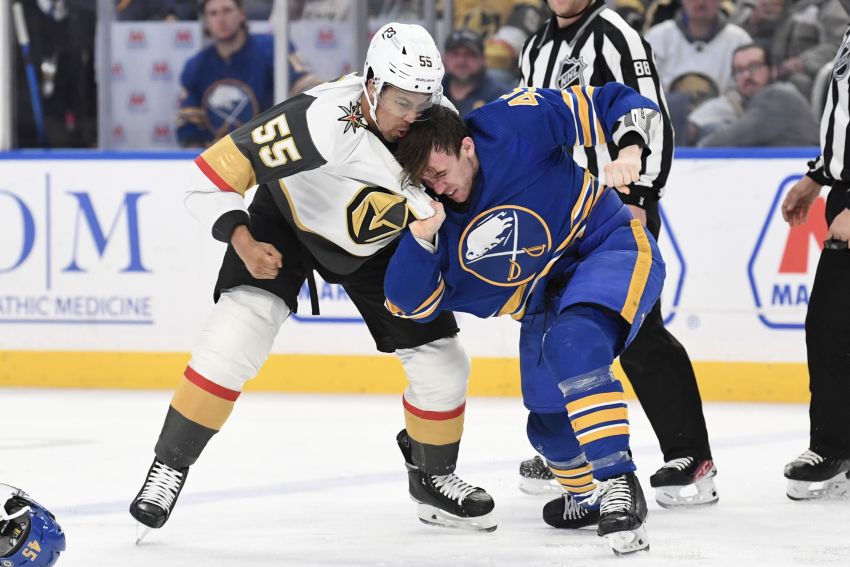 BUFFALO – Instead of blocking out the noise and trying to treat it like any of the other 82 games this season, captain Kyle Okposo wants the Sabres to embrace the stiff challenge facing Jack Eichel and the Vegas Golden Knights presents.

Games as anticipated as tonight’s haven’t materialized often over the last decade.

Remember, that was before Eichel dissed Sabres fans following Vegas’ 3-1 loss, saying, “It only took seven years and me leaving for them to get into the game.”

The crowd might be more amped this time. During the second intermission of Tuesday’s 4-1 loss to the Arizona Coyotes, the video boards showed an out-of-town highlight of Eichel scoring, and fans instantly booed.

Tonight’s game should be memorable.

“We haven’t been in big games in the last 10 years because we haven’t been in the playoffs,” Okposo said following Wednesday’s practice. “Let’s try and build something to where we can play in these games and have them mean something and rise to the occasion like a few times we did last year. Let’s continue that.

“We don’t need any more pressure but, yeah, let’s rise to the challenge.”

Last year’s win over the Golden Knights offered the Sabres a taste of the spotlight, and it served them well down the stretch as they won several notable games, including the Heritage Classic and on “RJ Night.”

Sabres coach Don Granato said the environment “could be pretty energized” against Vegas.

“It’s good for our guys,” he said. “I think our guys, you have to acknowledge two teams that made a big trade with really good hockey players going both ways. Anybody that plays against their old team always wants to do well, whether it’s Jack or whether it’s Alex or Peyton. So I think those are just natural dynamics that happen. It makes it great. It breaks the monotony of 82.”

Knocking off the NHL’s top team would help the Sabres break out of their recent rut. They’ve lost their last three contests. They haven’t dropped four straight since a six-game skid from Feb. 17 to 27.

In losing back-to-back games 5-3 to the Carolina Hurricanes and Tampa Bay Lightning last week, the Sabres might’ve performed well enough to beat two legitimate Stanley Cup contenders. In Tuesday’s loss, however, they looked sluggish and lacked pace against one of the league’s weakest rosters.

“We’ve just gotta take a breath here,” Okposo said. “We’ve got to get back to what makes us a good team, and I think we’ve just gotten away from that over the last few games. We’ve just been … straying a little bit from our identity and that’s it. That’s all we’ve got to focus on is getting back to that and there’s no panic.”

How do you prevent a team from overreacting to a losing streak?

“You address it,” Okposo said. “We talked this morning and you just talk through things. We have communication with the coaching staff, with the guys and check in with guys, ‘How we doing?’ And you just talk through it. Everybody’s going to be down in a situation like this. There’s ups and downs in a season, there’s ups and downs in guys’ games. You just have to make sure you don’t ride the roller coaster. You got to try to find that steady incline up.

“That’s what we have to try to do as a group, and it’s going to be a little bit more challenging with some of the inexperience and youth we have on this team. But we’re going to get through, and we have guys on this team that know how to.”

“I mentioned the very first day at training camp to our team, that our culture, we think we have a culture and it’s this long-carry thing, it’s not,” Granato said. “Your culture will be built at moments of crisis and crisis is either actual or is perceived. So the actual is we lost, the perceived is we didn’t do this, we didn’t do that, we need to be better here. All that perceptions that we all have, different opinions and perceptions of what went wrong and what might be going on because now you’ve lost three in a row.