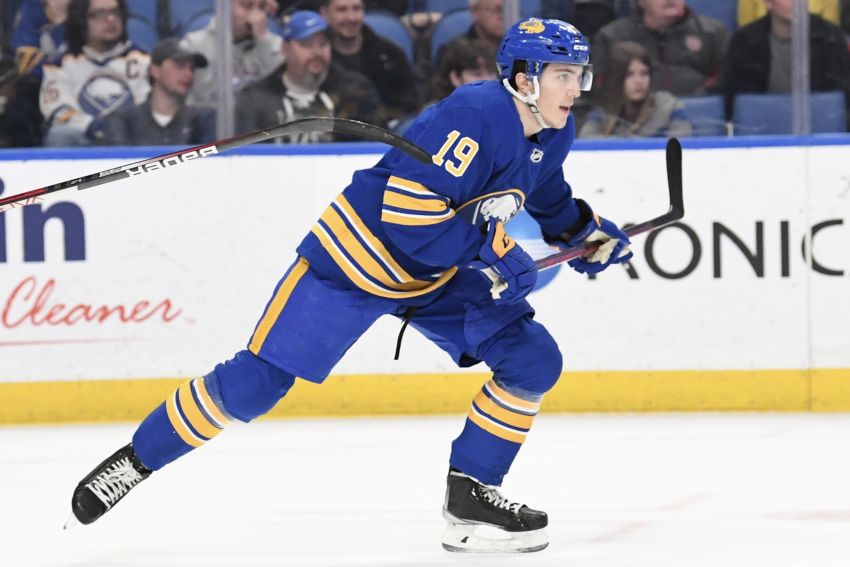 BUFFALO – For now, Peyton Krebs has settled in at left wing, a spot he often played down the stretch as a rookie for the Sabres last season.

On another team, Krebs, 21, might be utilized at center, his natural position. But the Sabres, having built up impressive depth down the middle, can construct a lineup featuring about six centers. So a couple must be moved to a wing.

Besides Krebs, three other centers – Rasmus Asplund, Zemgus Girgensons and Casey Mittelstadt – have been shifted during training camp or at times during the last year.

“I just try to be as versatile as possible,” he said following Monday’s session of camp at KeyBank Center. “You never know where you’re gonna play. I think at the end of the day, in the D-zone, it’s a group effort to make sure that … you can all play together and be good defensively.”

Sabres coach Don Granato, of course, believes the versatility within his forward corps can be a major strength.

“When we shift and move things around, we have a team that’s more adaptable,” said Granato, whose Sabres host a preseason game tonight against the Carolina Hurricanes.

Krebs, who registered seven goals and 22 points in 48 games with the Sabres last year, has proven he possesses the talent to adapt to all sorts of situations.

Two years ago, the COVID-19 pandemic forced the Western Hockey League to play a truncated schedule in a bubble. When Krebs’ team, the Winnipeg Ice, lost some defensemen, the coach, James Patrick, couldn’t use outside reinforcements.

So Patrick, an ex-Sabres defenseman and assistant coach, briefly moved Krebs to the blue line.

“We had no choice and it was just he was the only player who could do it and, so, (I was) curious how he would be,” Patrick said during the summer. “I … will say he was so dominant. We felt he was better at defense than he was at center. He had the puck the whole game. Not only were we blown away, I mean, the scouts were amazed by it.”

Patrick said Krebs played a whopping 38 minutes one game and about 33 minutes the other two.

The 6-foot, 187-pound Krebs, who said he enjoyed the switch, acknowledged he has thought about how his career could’ve played out if had become a defenseman.

“I’m too small to be a D, though, I think,” said Krebs, one of the assets from the Sabres received from the Vegas Golden Knight in last year’s blockbuster Jack Eichel trade. “I don’t know. I’d rather be up in the O-zone.”

That’s where Krebs is at his best. Last year, following a slow start, he grew more comfortable as the season progressed. By the middle of the winter, he began to regularly showcase his supreme vision and terrific playmaking skills.

“Because he’s so young, he’s just growing and growing every day,” Granato said. “He’s been a prolific scorer and playmaker. … You enter this level of play – it’s the highest level in the world – and these guys are so used to being plus-1 by making a play and scoring a goal that they can outscore their mistakes or recover their mistakes. You can’t at this level like you could at another level.

Krebs should have a calmer season in 2022-23 than the dizzying one he experienced last year, when he played for four teams. In addition to Vegas and Buffalo, he played for their AHL affiliates, the Henderson Silver Knights and Rochester Americans.

After he returned to Rochester following Buffalo’s season, the Amerks went on a 10-game playoff run, winning two series. His season did not end until late May.

“Looking back, it was definitely a long year,” Krebs said. “I mean, this time last year, I was in Vegas. So you think about that, and it’s a lot different, for sure. But it’s all been positive. Every setback I’ve taken as a way to get stronger and build my mental strength and my game. It definitely was a lot of things to think about and a lot of things, but at the end of the year, I look back and I think it made me a lot stronger.

“Like for me, I think those setbacks, and I wouldn’t even call them setbacks, but they made maybe a lot stronger mentally and going into this year, can come in with a little less anxiety and just play.”