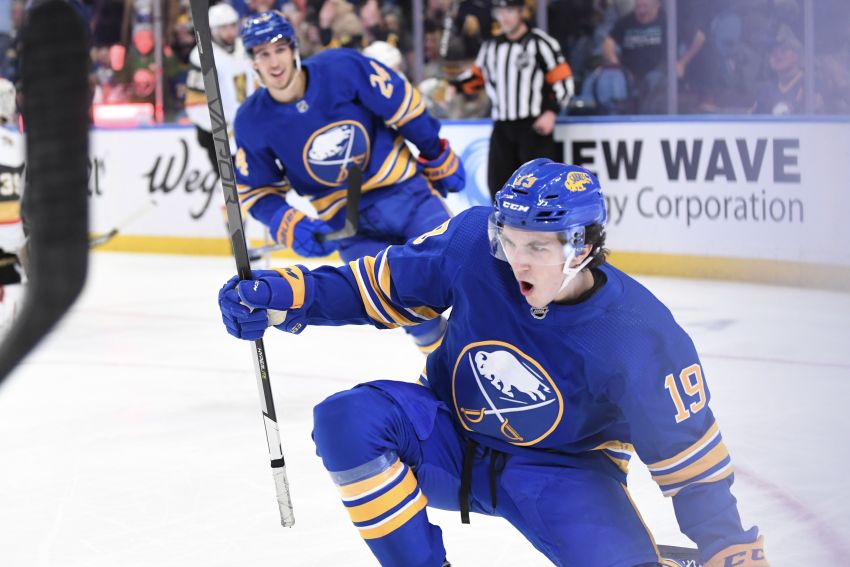 Krebs and Tuch, having arrived from the Vegas Golden Knights in the blockbuster Eichel trade, will forever be linked together. The wingers have embraced the opportunities that materialized when they departed one of the NHL’s elite teams to join a rebuilding one.

So Thursday’s thrilling 3-1 win over Vegas, a win Tuch cemented by stealing the puck from Eichel and scoring an empty-net goal, felt extra special.

“I want the best for Jack, but that was exciting,” Krebs said. “Me and Tuchy, we’re passionate about playing here in Buffalo. We want to do the best we can for this organization. And that felt good giving that guy a hug. It’s just exciting.”

The triumph, just the Sabres’ 19th this season, offered a glimpse into what could be a special future. There was a lot to like.

“It was against my old team, felt really good, but it showed a lot of character and maturity,” Tuch said.

– Krebs and Tuch illustrated how they’re quickly becoming major pieces of the Sabres.

– Coach Don Granato lauded the sacrifice his players made for each other in eking out a gritty win.

– The Sabres, who have wilted under pressure late so many times this season, received the go-ahead power-play goal from winger Victor Olofsson 16:16 into the third period.

“Guys just kept feeding off each other and one guy seemed to almost outdo the next as the game went along,” Granato said. “So fun to be a part of.”

The crowd of 12,437 fans, the largest at KeyBank Center this season, ate it all up.

“It was electric tonight,” Tuch said. “It was a phenomenal feeling, and to get a win in front of that big a crowd is something that really goes a long way.”

Sabres fans booed Eichel mercilessly all night. In warm-ups. When they heard his name announced in the starting lineup.

When Thursday’s opening faceoff rolled around, the crowd seemed to be frothing. Many of the spectators booed the ultra-talented center every time he touched the puck.

He even heard boos mixed with cheers during a video welcoming him back that highlighted his work in the community. Seriously.

Eichel, the face of the franchise for six seasons, reportedly wanted out of Buffalo long before he injured his neck last season and the Sabres refused to let him undergo the surgery he preferred.

The crowd inside the noisy rink never let up. The fans booed him before faceoffs and even when he stepped on the ice. When he got tossed out of the faceoff circle or knocked down, they cheered.

“This is about the loudest I’ve heard this place,” Eichel said. “Really. After it only took seven years and me leaving for them to get into the game. But I’m sure it was mixed. It was a nice tribute. And there was plenty of people here who were supporting me, and plenty of people who were booing. They must be booing because they wish I was still here.”

Following the win, the Sabres honored Anderson with a tribute on the video boards that featured family members and teammates.

Krebs said: “For him to come here, 21st (pro) season, that just shows the guy right there and his passion toward hockey, toward his teammates. Nothing but great things to say about that guy.”