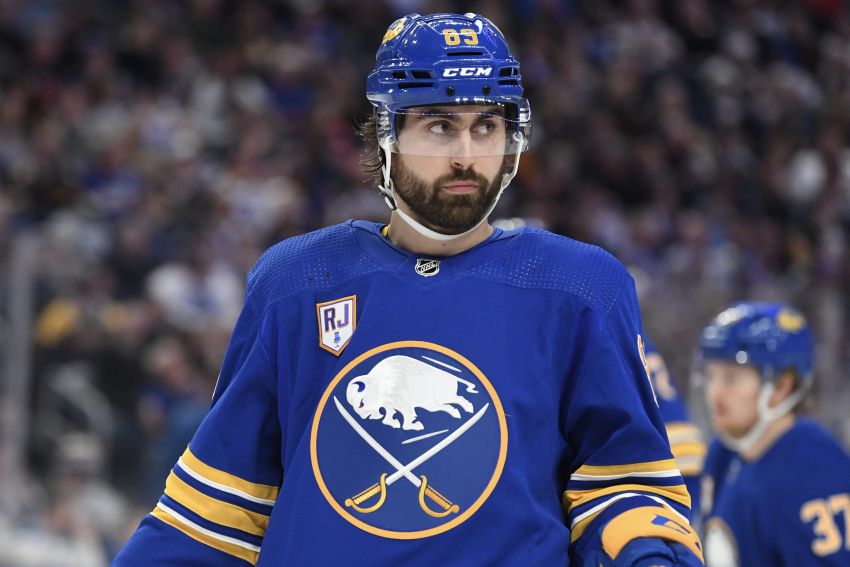 BUFFALO – Nearly seven months later, the novelty of playing for the Sabres, the team he passionately rooted for growing up, hasn’t worn off for winger Alex Tuch.

In the back of his mind, Tuch had hoped an opportunity to join the Sabres would materialize someday, perhaps at the end of his career. Then on Nov. 4, the Vegas Golden Knights sent him to Buffalo as part of the blockbuster Jack Eichel trade.

“Something that … since I was 3 years old (I was) looking to maybe do one day,” Tuch said of playing for the Sabres. “I didn’t know when it was going to be. Maybe even try to finish it off or anything like that. It happened a lot sooner than I thought I was going to, but I will tell you that I’m very happy that it did happen.”

The community warmly welcomed the affable Tuch, 26, and his No. 89 jersey can be spotted all over the KeyBank Center stands every game.

On an upstart team filled with likable personalities, Tuch, who usually has a smile etched on his face, has quickly become one of Sabres’ most popular players. Clearly, besides his scoring prowess, his zeal for playing in Buffalo resonates with the fan base.

“It’s been unbelievable,” Tuch said of the fan support April 30 as the Sabres held end-of-season meetings. “It’s been so welcoming for not only my teammates in the organization but for the entire city. I’ve seen nothing but unbelievable support. … I have to say thank you for that. It made my job a lot easier and my family’s life a lot more enjoyable.”

Meanwhile, Tuch, who was recovering from shoulder surgery when the Sabres acquired him, meshed with a group of players that grew close over the season.

The Sabres cast Tuch in a more prominent role he embraced. The five-year veteran is one of the Sabres’ oldest and most experienced players, and he has established himself as one of their leading voices.

“I don’t think I changed my personality or how I carry myself or how I interact with my teammates at all,” Tuch said. “I’d say that I guess my role going from one of the youngest guys to one of the older guys on this team is something that maybe made it a little more influential or impactful within the group.

After years of skating as a second- or third-liner, Sabres coach Don Granato often utilized Tuch at right wing on the top trio beside center Tage Thompson and Jeff Skinner. Tuch also killed penalties and played in every situation, averaging a career-high 18 minutes, 25 seconds of ice time a game.

The easy transition and fresh opportunities buoyed Tuch’s scorching start, and following his debut Dec. 29, the 6-foot-4, 217-pound power forward compiled 10 points in his first 10 outings. Only four players in franchise history have enjoyed a more prolific 10-game start after being acquired in a trade.

But Tuch cooled off as the season progressed. He scored seven of his 12 goals in his first 16 appearances.

“I was able to find my groove pretty quickly,” Tuch said. “Obviously, going through the season had a little bit of a production lull about 20 or so games in. That’s something I’m looking to not have next year and to work on my consistency from a production standpoint. I don’t think my game wavered too much but sometimes that happens.”

“I’ve said this to Alex, I think he’s still scratching the surface of what he can do as a hockey player,” Sabres general manager Kevyn Adams said. “I think he has another level.”

Tuch wants to use his first normal offseason in three years to reach that higher level.

Last year, two weeks after Vegas’ playoff run ended, Tuch learned he needed to undergo shoulder surgery. Two years ago, the NHL restarted its season in August following a COVID-19 pause, so he spent much of the summer playing in the Edmonton bubble.

This year, Tuch plans to attack a training regimen and get in some golfing.

“I was telling the guys that I haven’t golfed in a year and a half, so that will be nice to get back on the course,” Tuch said. “It will be good to really kind of get back to building my strength up and trying to get more longevity and try to not be injured, so there are a lot of things I want to work on off the ice along with getting back to really having a couple good months of really skating and building skills work.”

The Rochester Americans must win Game 3 tonight against the Laval Rocket at Blue Cross Arena to stay alive in the best-of-five AHL North Division final.

The Amerks lost the first two games in Laval.

“What I said to the guys is the way you win three in a row is you win one,” Amerks coach Seth Appert told reporters following Monday’s 3-1 loss. “You don’t think about winning three in a row; we need to win one game three different times.”

The AHL on Tuesday suspended Amerks forward Ben Holmstrom two games for an illegal check to the head in Sunday’s 6-1 loss.

Sabres winger Rasmus Asplund has scored a tournament-high six goals in seven games for Team Sweden at the World Championship.