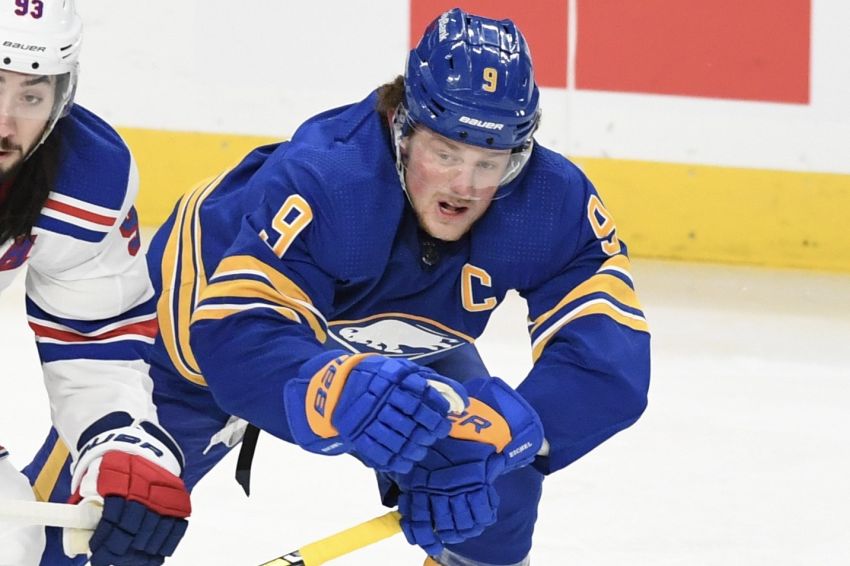 Kevyn Adams repeated it over and over – eight times in total while discussing Thursday’s blockbuster Jack Eichel trade. The general manager refuses to compromise if it will interfere with the plan he has laid out to rebuild the Buffalo Sabres.

Adams said he would only deal Eichel, the injured ex-captain, if someone met the Sabres’ asking price. So he held his greatest asset until an offering to the team’s liking materialized.

It took about six months – Eichel first spoke of the “disconnect” he felt with the Sabres over his injured neck May 10 – to find a partner willing to pony up the pieces they desired.

“We were not going to compromise on what we felt we needed as a return,” Adams said on a Zoom call Thursday after completing the complicated deal with the Vegas Golden Knights. “This was a really important decision for us. So however long it was going to take it was going to take.”

The first-rounder is top-10 protected. The Sabres did not retain any of Eichel’s salary.

The deal ends one of the oddest chapters in franchise history.

“I’m happy to be moving on,” Eichel told ESPN. “I appreciate everything the Buffalo Sabres have done for me and I can’t say enough good things about the city and everything from when I first got drafted here.”

Eichel, the face of the Sabres for more than five years, wants to undergo artificial disc replacement surgery, a procedure that has never been performed on an NHL player. Sabres doctors, however, wanted Eichel to have fusion surgery.

“We have a lot of respect for the work that’s gone into this from his agent, his second opinion doctors, the specialists and experts that he’s seen in this field,” McCrimmon said. “We’ll defer to their wishes and respect the choices that they’re making based on knowing how much work they’ve done to prepare themselves for surgery.”

Adams said again Thursday the ordeal “was nothing personal” against Eichel. He wanted to keep the details of his conversation with Eichel following the trade private.

“What I can tell you is I care about Jack Eichel as a person,” Adams said. “I told him that. I wish him nothing but the best moving forward. This has been a really, really challenging situation for everyone involved and I wished him the best of luck. I want nothing more for Jack to get healthy and do what he loves to do, which is play the game.”

Eichel hasn’t played a game since injuring his neck March 7. Right now, the Golden Knights don’t have a timeline for his return.

When the Sabres drafted Eichel second overall in 2015, one pick after Connor McDavid, he was supposed to lead them back to glory. Instead, they remained at the bottom of the NHL.

While Eichel enjoyed some nice offensive seasons in Buffalo – he was a legitimate MVP candidate two years ago – he never reached his full potential.

After the Sabres changed regimes again in 2020, Eichel, who often looked beaten down by all the losing he experienced, told the team he might like to be traded.

“I was hearing a lot of things that we were going to try to do a rebuild, so I went to the team and just said I wasn’t really happy with the idea of that,” Eichel told Sportsnet. “And if that’s the route they wanted to take that maybe it would be better to move me and use me as sort of a jumpstart in get some picks, prospects, whatever you want to say, and start your rebuild if that’s the case.”

“Obviously, that didn’t go over well.”

Then the Sabres loaded up prior to last season, making a slew of acquisitions to try to crack the playoffs for the first time since 2011. But they imploded, finishing dead last.

“It was kind of a disaster in terms of a personal season for myself,” he said. “I didn’t have a great year. … I think probably that conversation (about a trade) that happened a year ago probably had something to do with part of the process being so difficult.”

Adams said he told Eichel – he did not mention when the conversation took place – the Sabres must build their organization “with people that are dying to be Buffalo Sabres.”

“That care so much about that jersey that they’re going to put on, and that’s how we have to move forward,” Adams said.

Eichel, of course, is just the latest disgruntled player the Sabres have deal from their old core. In July, they dished center Sam Reinhart and defenseman Rasmus Ristolainen.

“We need to build an organization of people and players that want to be here that are truly buying in and all in,” Adams said. “And that was an important part of this. What I’ve talked to our players about is the connectivity to our fan base and we need to be a team that has a culture in the locker room of truly caring about each other and caring about putting the jersey on and the connection we need to make with fans. That’s all the stuff we’re building.

“So we had to make decisions with certain players to make sure we were following that vision and then the players in the pieces we were getting back were going to be buying into that.”