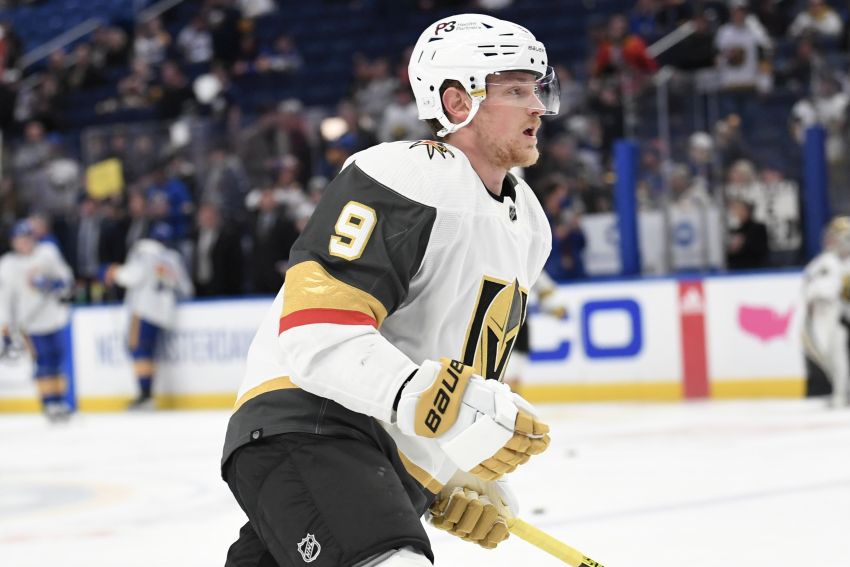 BUFFALO – For most of his six-minute pregame media availability, ex-Sabres captain Jack Eichel spoke blandly, offering cliché answers about facing his old team as a member of the Vegas Golden Knights.

But when the topic turned to the booing he endured March 10 throughout his return to KeyBank Center, Eichel, the face of the Sabres for six seasons, briefly opened up.

He felt the jeers and vitriol from the raucous crowd.

“It was maybe a little bit surprising,” Eichel told a throng of reporters prior to his three-goal, four-point night in Thursday’s 7-4 win over the Sabres. “I don’t know why. I probably shouldn’t have been last year, but I was maybe a little bit surprised by the reception. I’m just like anyone else. I’m a human being. It was emotional for me like it probably was for them.

“Maybe I was a little bit hurt. That’s probably why I said the things I said.”

Eichel, 26, ripped Sabres fans following Vegas’ 3-1 loss eight months ago, saying, “This is about the loudest I’ve heard this place. Really. After it only took seven years and me leaving for them to get into the game.”

The ultra-talented center, who heard more booing Thursday, said hours before the game “that’s all in the past now.”

“I’m not going to sit here and say, ‘I wish I didn’t say it,’” he said. “I just don’t think there’s enough time for that. What happened happened. It’s in the past. I’m trying to just focus on the present and we have a big game tonight. That’s what I’m worried about.”

The sight of Eichel, the second overall pick in 2015, wearing a Vegas jersey still looks a bit odd. He was the most prominent Sabre over his 375-game run, sometimes showcasing superstar qualities.

Eichel, of course, was supposed to lead the Sabres back to glory. Instead, he ended his tenure never having never sniffed the playoffs.

His relationship with the Sabres soured so badly after he hurt his neck two seasons ago they stripped him of the captaincy and sent him home last year.

The Sabres finally traded Eichel, who refused to undergo the neck surgery the team’s doctors recommended, in a blockbuster deal Nov. 4, 2021 that brought forwards Peyton Krebs and Alex Tuch to Buffalo.

The exchange has benefited both teams. Krebs, 21, and Tuch, 26, were instrumental in the Sabres’ late-season surge in 2021-22. Tuch began Thursday’s game with seven goals this season.

While the Golden Knights missed the playoffs last season, they entered Thursday’s contest on an eight-game winning streak and first overall in the NHL.

Eichel, of course, has been at the forefront of their success. Right now, he’s the healthiest he has been since 2019-20, when his dynamic play generated Hart Trophy talk much of the season.

Through his first 15 games, he has registered nine goals and 19 points.

“Everyone goes through stuff,” Eichel said. “I’m no different. People go through injuries and adversity in their career and I went through a little bit of that. I’m happy to be on the other side and happy to be playing hockey and be part of this group.”

“He’s feeling good physically and mentally he’s probably comfortable now in Vegas,” he said. “He gets traded there, he’s still getting surgery, so getting a training camp under his belt, I think, has helped him. He’s been a really good player for us at both ends.

“Probably, I would say, arguably one of our best defensive forwards from Day One. He’s doing a good job closing on people, being in good spots in the D zone. It’s allowing him to have the puck more and it’s showing in his offensive numbers.”