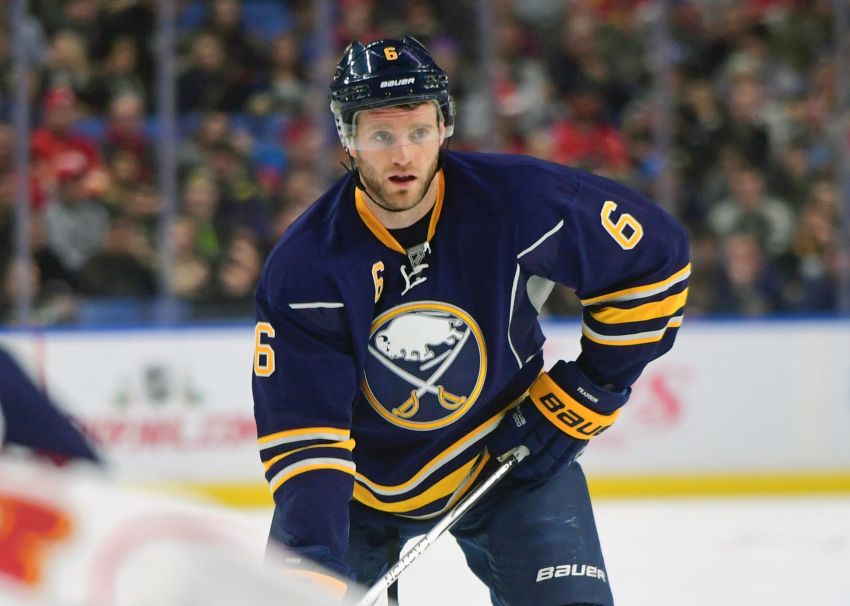 BUFFALO – Playing limited minutes would be easier for Sabres defenseman Cody Franson if he enjoyed the comfort of some contract security.

But the affable veteran, whose ice time has recently increased because of injuries, will be a free agent following the season.

Every minute, an opportunity to showcase his talents, is precious.

“I got to be able to show people I’m very capable of playing this role for a full season,” Franson said Monday inside KeyBank Center. “I did it in Toronto for four years.”

Franson, 29, has skated 17 or more minutes in 18 consecutive games entering tonight’s home tilt against the Los Angeles Kings. Eleven times in that stretch he has surpassed the 20-minute mark.

In his first nine appearances this season, Franson only hit the 16-minute mark once. Twice he barely skated 11 minutes.

A run of defense injuries, most notably Zach Bogosian’s knee problem, has forced Sabres coach Dan Bylsma to rely heavily on Franson, who has produced 29 or more points four times in the last six seasons.

Naturally, playing 20 or more minutes a night has helped Franson find a groove.

“I’m most comfortable up and around there,” he said. “If you can get 18 or more minutes, it’s easier to stay in the game and get in the flow of the game, not have those pockets where you’re sitting there for long periods of time and getting cold and losing the rhythm of the game.

“I think it’s gone well for myself in that time span and I’ve felt quite good about my play.”

Franson has scored one goal – the entire defense corps, incredibly, has combined for two all season – and seven points in 27 games. His plus-1 rating is the highest among Sabres who have appeared in at least 20 games.

“Playing the bigger minutes you get a little bit longer leash, you don’t have to try to be as perfect,” Franson said. “I think that’s a big part of me playing well, I don’t have to try to make every little play, have a mistake-free game. You can kind of just go out there and … know that if you do have one of those hiccups, you’re going to go back out.

“Playing that small-minute role, that could cost you the rest of the game. That long leash allows you to play confidently.”

The last five weeks have been perhaps the most notable stretch of Franson’s 86-game stint here. After signing a two-year, $6.65 million contract days before training camp started last season, Franson started strongly, then tapered off as his minutes declined.

His season ended when Columbus’ Scott Hartnell boarded him Feb. 19, creating a vision problem – his left eye was moving about 20 percent slower than his right – he spent all summer correcting.

“It’s been real frustrating,” Franson said of his time with the Sabres. “I had the injury at the end of the year, but playing the small-minute role the whole season, really, mentally, it was a long year.”

Franson finished with a career-low four goals and 17 points in 59 games.

With Dmitry Kulikov back for Friday’s 4-1 loss to Washington, Franson’s ice time dipped to 17 minutes, 35 seconds, his second-lowest total since Nov. 3.

Of course, Franson knows his minutes could keep decreasing as the blue line returns to full strength.

“The strength of our defense when everyone’s healthy is going to be six good guys back there sharing the minutes, not having four guys at 23-plus minutes and two guys at the 10-minute range,” Bylsma said. “Is there an adjustment going to the 15-, 16-(minute) range? I think a little bit.

“But I don’t think … the role for Cody won’t change, and I think that’s the important part.”

But will Franson’s team change? With an expiring contract, he could be dealt prior to the trade deadline. That happened two years ago, when the Maple Leafs dished him back to the Nashville Predators, his first team.

Franson struggled skating fewer minutes with the Predators, which possibly cost him millions of dollars in free agency.

“They put me in a small-minute role there,” he said. “(It’s) a little unfortunate the way it all worked out.”