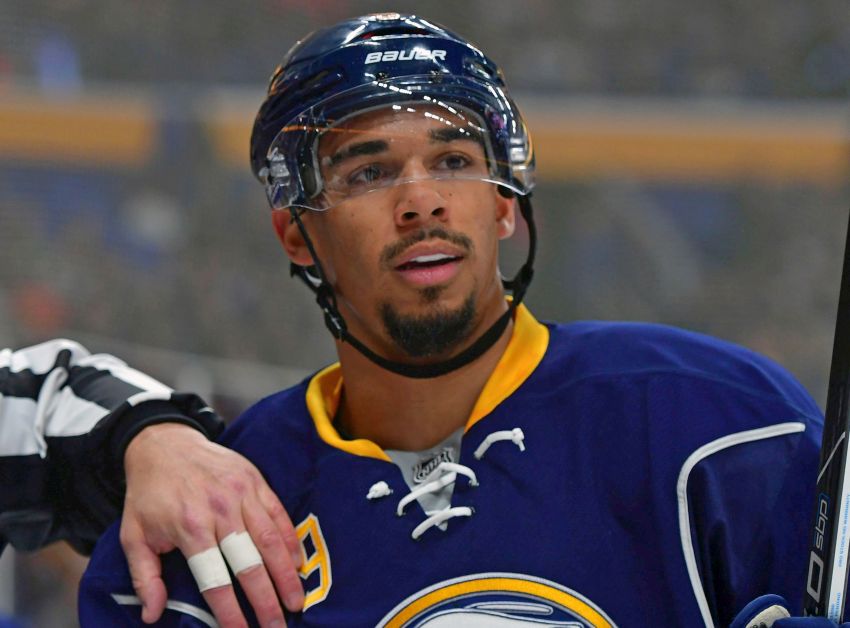 BUFFALO – So what should the Sabres sell off before Wednesday’s trade deadline? After their most wrenching weekend in years, they can’t possibly be buyers, right?

Brutal road losses to the hapless Colorado Avalanche and Arizona Coyotes kicked them down the standings, effectively eliminating them from contention with 20 games left.

Desperate for wins, the Sabres couldn’t handle the NHL’s two worst teams. Think about that. Against the Coyotes, they frittered away a 2-0 third-period lead, imploding late.

It was an ugly two days for a franchise that hasn’t tasted the playoffs since 2011.

Almost four years after the old regime began gutting the Sabres for a long rebuild and an eventual return to glory, they appear to be a long way from truly contending.

The Sabres, who had Monday off and host the Nashville Predators tonight at KeyBank Center, could look much different in just a day. With some notable veterans on expiring contracts, at least a few players could be dealt.

They also have winger Evander Kane, one of the league’s hottest scorers with 21 goals in his last 37 games. Would they deal him?

Below are a few players who could be in play before the deadline. Considering the Sabres’ recent struggles, how many players should general manager Tim Murray really keep off limits?

Kane, one year left at $6 million

Five or six months ago, as rumors swirled the Sabres wanted to dish Kane, he appeared to have little or no value.

A misdemeanor charge stemming from an incident at a local bar as the Sabres hosted the NHL Draft on June 24, his second off-ice incident in six months, still hung over his head.

Kane, 25, was also coming off a disappointing 20-goal season in which he earned a one-game benching after partying and missing practice.

Who was going to take that and a $6 million price tag?

Now, thanks to a stunning in-season turnaround, Kane’s value might never be higher.

Right now, Kane’s enjoying one of the best stretches by a Sabres forward in years. He has a whopping 20 even-strength goals.

Before Sabres coach Dan Bylsma reunited him with linemates Jack Eichel and Sam Reinhart, Kane did most of his damage on the third line. In today’s low-scoring NHL, lethal scorers rarely skate outside of the top six forwards.

Kane’s .552 goals per game since Dec. 3 is the Sabres’ highest number since Thomas Vanek averaged .548 in his 40-goal season in 2008-09, according to local statistician Mike Haim.

The Sabres gave up a slew of assets to acquire Kane from the Winnipeg Jets in 2015 because they believed he could score 30 goals.

Now that Kane has essentially become that player, why would they want to deal him? They rank 25th in scoring, averaging just 2.4 goals a game. They need Kane.

At 38, Gionta is still productive, showcasing durability, smarts and speed. The captain has 12 goals and 27 points in 62 games and skates almost 17 minutes a night.

Gionta also won the Stanley Cup with the New Jersey Devils in 2003.

With that impressive resume, a contender would almost certainly want to add him to its third or fourth line for a playoff run.

But Gionta has said he wants to stay in Buffalo. Would the Sabres honor that request? His contract stipulates he can only accept a trade to five teams he has chosen.

Given how well he has played, the Sabres might want to re-sign him. Still, he has value in a seller’s market.

Could the Sabres pass up, say, a solid prospect or a high pick, especially when they can just bring him back in a few months?

And if, say, the Chicago Blackhawks or another team built for a Cup run comes calling, would Gionta turn that down?

In his first and probably only season with the Sabres, Kulikov, 26, has been a total bust.

The Russian has been dogged by a lower-back bruise since getting knocked into an open bench door in his preseason debut. He has one goal, two points and a team-worst minus-15 rating in only 36 games.

The Sabres acquired him to be Rasmus Ristolainen’s partner, but he has skated sparingly beside the No. 1 defenseman.

Rather than lose Kulikov for nothing – they sent defenseman Mark Pysyk to Florida and swapped picks for him at the draft – the Sabres might just cut their losses.

Kulikov was arguably the Panthers’ best player during their opening-round loss last season, so he has a recent history of playoff performance.

The affable Franson, 29, can eat up minutes and quarterback the power play.

Given the Sabres’ weak defense depth throughout the organization, Franson could be an attractive option for next season.

2 thoughts on “Slumping Sabres have assets to trade”