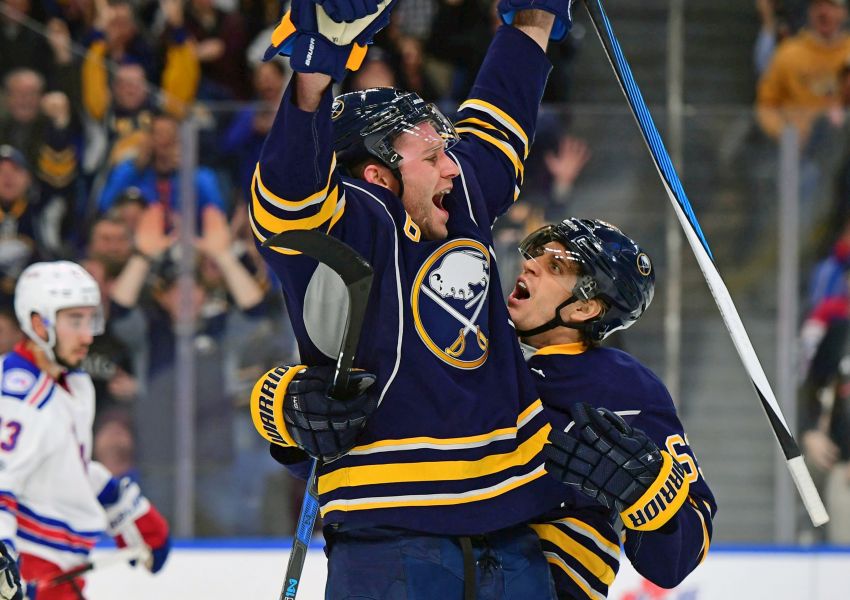 BUFFALO – It’s quieter in these parts, easier for Sabres defenseman Cody Franson to avoid the noise leading up to Wednesday’s NHL trade deadline.

As a member of the Toronto Maple Leafs two seasons ago, Franson, 29, couldn’t escape the constant trade chatter inside a hockey metropolis.

“It was kind of in your face everyday,” Franson said Sunday inside KeyBank Center. “The media attention to that type of thing there was probably a decent amount stronger. … You turn the TV on or you go to a restaurant, it’s kind of always going across the ticker.”

These days, Franson’s name is all over trade lists again. As an established veteran with four seasons of 29 or more points, the upcoming unrestricted free agent could be wanted.

Following a bye week, the Sabres start up again tonight on the road against the hapless Colorado Avalanche, their first game since Sunday. Thanks to a three-game winning streak last week, they jumped into the Eastern Conference playoff race, inching within two points of a spot.

But with other teams playing this week, the Sabres have fallen back during their time off. It’s unclear if they want to be buyers or sellers before the deadline.

If they deal assets, Franson could be one of their biggest chips.

Franson hasn’t been an offensive force in his two years with the Sabres. After a solid start in 2015-16, he slowed down and suffered a season-ending eye injury in February. He had trouble finding ice time earlier this season, skating under 12 minutes twice.

Injuries helped Franson seize better opportunities late in the fall. Now, he plays 20 minutes again most nights and has three goals and 16 points in 53 games.

“For the most part, I feel like I’ve played pretty well and I’m confident in what I’m doing out there,” Franson said.

Franson believes his recent stretch “feels a lot closer to my time in Toronto.”

“When I was in Toronto, I was playing 22 minutes a night … playing in that top four,” he said. “I was really comfortable in that role. I had good numbers.”

That’s why he could fetch a decent draft pick or a prospect from a contender.

“It’s a lot of the same situation as my last year in Toronto,” Franson said. “Expiring contract, I was having a good year in Toronto. This year, it’s been OK points-wise, things like that. …

“I try to control what I can. If I’m playing well, I’d like to think I can give myself a good chance to be in a good situation, no matter how it ends up going, and that’s really all I’m focusing on.”

Franson was also months away from hitting free agency in 2015. In the midst of another 30-point season, he reportedly turned down a lucrative multi-year contract extension.

Instead of losing Franson for nothing, the Leafs traded him to Nashville, where he began his career. But Franson struggled playing reduced minutes with the Predators.

“I got put in a depth role and didn’t adjust to that well,” he said.

His 28-game stint in Nashville – he dropped from .58 points per game to .17 – cost him millions. He settled for a two-year, $6.65 million deal with the Sabres late in the summer.

If Franson gets dealt, he could be put in a depth role again, which might make him less attractive in free agency.

Naturally, Franson’s future is “something that’s on your mind.”

“You try not to have it play a part in your everyday life or when you’re at work at the rink,” Franson said. “Everybody’s human. … We’re in a playoff fight right now. We’re all focused on what we’re doing in the room right now. … It’s been a lot easier to not think about things like that.”