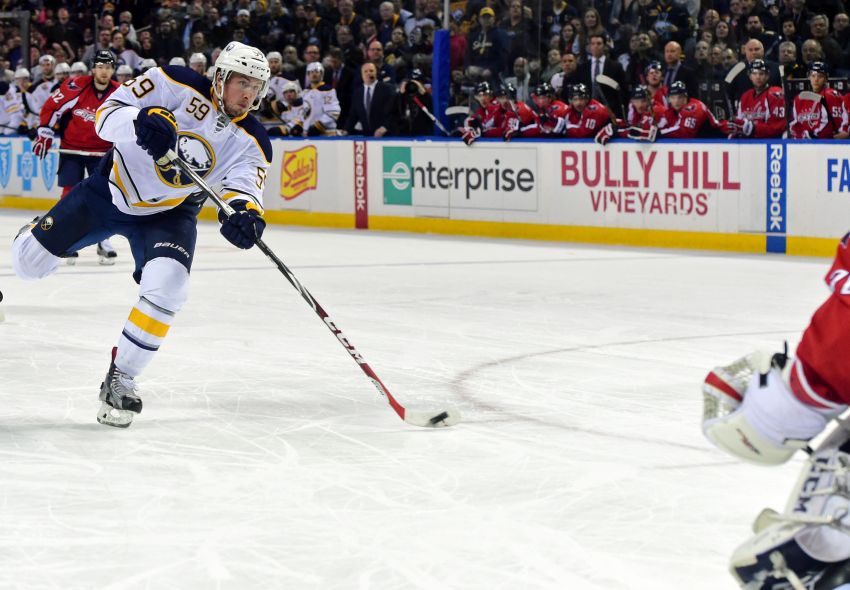 BUFFALO – Count the Sabres’ exciting 4-1 shellacking of the high-powered Washington Capitals on Saturday as perhaps the most impressive victory felt in these parts in years.

The 29th-ranked Sabres ended a five-game home losing streak while manhandling the league-leading Capitals, who roared into the First Niagara Center having won five straight contests and 14 of the last 16.

This one was never in doubt and had a little bit of everything. First-period goals from Phil Varone and Tim Schaller, two recent AHL recalls, buoyed the Sabres to only their ninth home win in 25 tries. Evander Kane and Cody Franson added second-period insurance goals

Goalie Chad Johnson did the rest, slamming the door on the Capitals’ potent offense. The backup made 33 saves, including a nifty glove stop on 500-goal scorer Alex Ovechkin’s wicked shot from the slot.

“A win like tonight can generate a lot of positivity and a lot of momentum for us at home,” Sabres winger Marcus Foligno said. “I think (this was) a good character team win. Everyone was contributing tonight.”

“There was more than one guy who wanted to that for his teammate,” Sabres coach Dan Bylsma said. “I was glad to see Marcus step up and do it.”

When the spirited bout ended, Foligno emphatically implored the capacity crowd of 19,070 fans to roar, and they responded.

“You want to get the fans going,” Foligno said. “This is our barn. We don’t want anyone coming in here thinking they can run us over. I think fans have to be more into the game, and they do a great job. When you can fire up the fans, you have to do it.”

The Sabres’ 18th win this season – their third triumph in four contests but just the fourth in 12 tries – was significant.

For the first time since Dec. 4 and just the fourth time all season, the Sabres’ feeble offense scored four or more goals at home. Remember, the Sabres lost to Boston 4-1 on Friday at home. The Capitals had the night off.

Secondary scoring has been almost non-existent all season, so Varone and Schaller’s goals were huge. Varone, who was recalled earlier in the day, scored his fifth NHL goal. Schaller netted his third, a short-handed breakaway.

“We had all lines rolling,” Schaller said. “The scoring was spread out.”

Bylsma added: “To get positive results, we’ve leaned on Ryan O’Reilly and Jack Eichel to get us goals. Our last few wins have come with our team scoring goals.”

After Kane scored 7:14 into the second period, the Capitals yanked Braden Holtby, perhaps the NHL’s best goalie this year, after only 13 saves.

Holtby was 20-0-2 in his last 22 decisions and hadn’t lost in regulation since Nov. 10. Philipp Grubauer replaced him and allowed a power-play goal to Franson.