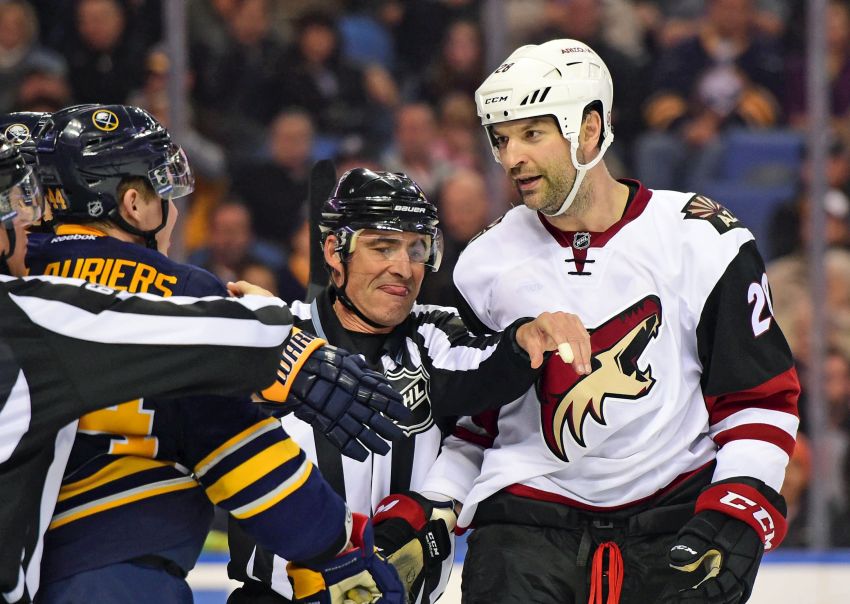 BUFFALO – There’s little middle ground when it comes to John Scott, the popular former Sabres tough guy whose election as an NHL All-Star captain has created an embarrassing episode for the league and left an eight-year veteran on an AHL roster in Newfoundland.

The 6-foot-8 Scott, one of the league’s last true enforcers, is a polarizing figure.

In Buffalo, where he played 90 games over two seasons, Scott is still a folk hero and adored by his ex-teammates. He joined the Sabres after they had deservedly developed a reputation as a soft team, and he quickly helped end that.

Scott, however, isn’t loved by the league’s higher-ups, who apparently didn’t want one of the Arizona Coyotes’ spare forwards grabbing attention Jan. 31 in Nashville.

Of course, Scott would never earn an All-Star spot from his skill. He had one assist in 11 games this season. But the game is a meaningless exhibition, so fans decided it would be a blast to see a hulking winger with five goals and 543 penalty minutes in 285 NHL games play three-on-three with the world’s best talent.

Scott, an affable personality, had some fun and said he would graciously accept if fans voted him in as the Pacific Division captain. They did, and the league and his team, according to TSN’s Bob McKenzie, asked the leading vote-getter to bow out. Scott refused, so the Coyotes, who host the Sabres tonight, sent Scott to the Montreal Canadiens on Friday as a throw-in with a real trade.

The Canadiens promptly buried Scott, whose wife, Danielle, is pregnant with twins, by jettisoning him to the St. John’s IceCaps. Scott hasn’t played in the AHL since 2008-09.

Apparently, not only is Scott out of an NHL job, he’s also out of the All-Star Game. The backlash, naturally, has been harsh.

Remember, Scott, 33, never asked for votes. To him, the idea fans wanted “to throw me in the All-Star Game” was “cool and fun.”

“I’ll definitely go,” Scott said Dec. 4 when the Coyotes visited Buffalo. “It’s kind of an honor. It’s one of those things where not everybody gets to go, so I’m not going to be upset about it and pout about it. You’ve got to roll with it and have fun with it.”

Still, Scott even issued a statement saying he was “flattered” and “grateful” for the votes but there were other Coyotes more deserving of a spot.

“If I was in his shoes, I would’ve accepted it also,” said Sabres defenseman Mike Weber, Scott’s good friend. “That’s one of those things where the fans voted for it. That’s part of what the All-Star Game is about. … I think Johnny was right in obviously accepting and going.”

So what about Scott’s NHL career? Could getting elected to the All-Star Game really end it? Enforcers are a dying breed. Scott’s greatest asset, besides his size and toughness, is his personality.

His people skills, perhaps more than his fighting skills, landed him gigs this season and last year with the San Jose Sharks. Teammates love him. He keeps the dressing room loose while still acting like a pro.

“Johnny’s one of those guys … that’s a very personable guy,” Weber said. “He’s a good guy in the locker room, great guy in the community and for his family. I think it would’ve been an enjoyable time that he would’ve had. He would’ve had some fun with it and (been) professional with it.”

The Sabres practiced Sunday in Arizona, where they begin a two-game road trip. They also play the Colorado Avalanche on Wednesday.