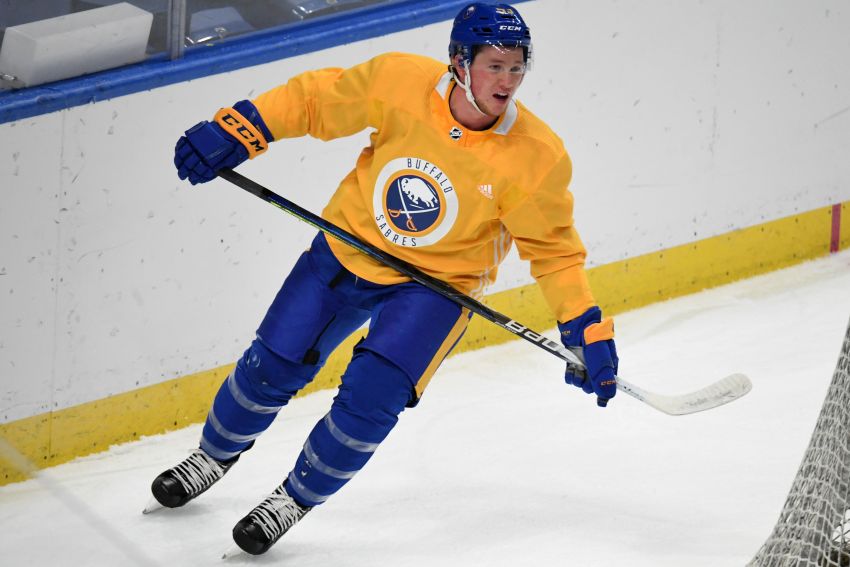 After a 10-month layoff, the Buffalo Sabres play 10 games in an 18-day stretch, starting with Thursday’s season opener against the Washington Capitals.

That includes three back-to-back sets. The early stretch will be rigorous and likely test the Sabres’ depth. They’re going to have to roll four lines.

“Right now, we need to be a good four-line team early in the season,” Krueger said on a Zoom call Friday.

So Krueger, who pretty much kept his lines intact for the first week of training camp, started tinkering with his trios during Friday’s practice.

Tage Thompson was promoted to right wing on the No. 1 line beside center Jack Eichel and Taylor Hall, according to reports from KeyBank Center. Meanwhile, Victor Olofsson moved from right wing on Eichel’s line to left wing beside center Eric Staal and Sam Reinhart.

Jeff Skinner, who began camp at left wing on Staal’s line, shifted to that spot beside center Curtis Lazar and Riley Sheahan on what might be the fourth line.

Krueger, as he illustrated last season, likes to balance his combinations.

“Jeff had some success with Curtis Lazar last year,” he said. “For us, also Tage Thompson has also had a very, very strong camp and I think you have to look at the combination of decisions that happened there. We believe it’s going to be necessary for us early in the season to be able to play with four lines. We’re going to need to spread the ice time out. We’d like every line to have a strength offensively and defensively.”

“Matchups, especially on the road, will not be a factor for us and we like the way the lines looked today. We thought that everybody understands that we will be changing lines as we go through the process of finding out what everybody’s about, but we liked the look of that group and look forward to seeing more of it.”

“Don’t overvalue them,” he said of Friday’s trios.

The Sabres will use tonight’s intrasquad scrimmage as an opportunity to replicate a normal game day, complete with a morning skate.

With zero preseason games scheduled because of the COVID-19 pandemic, scrimmages have an added importance this year. The Sabres held their first Monday.

“I spoke about it in our pre-meeting and I spoke about it again after practice, what an important day that is for us psychologically,” Krueger said. “I keep mentioning to you there are still 10 games in the month of January. …

The Sabres promoted defense prospect Will Borgen up to the main practice group following his performance in Monday’s scrimmage.

They also recently elevated center Rasmus Asplund from the second group, which is comprised mostly of AHL players.

“We thought Will needed to be compared with the gold group,” Krueger said Wednesday. “It’s been his execution through the first three practices and how he played in the scrimmage. We thought he was excellent in the scrimmage and he gives us a truly classic defensive option.

“He has the physicality to him, he has a mean streak in him, and Will has been with the organization for a few years now. He understands how we function and you could see it in the way he integrated himself into the practice today.”

Borgen, 24, played four games for the Sabres two seasons ago.