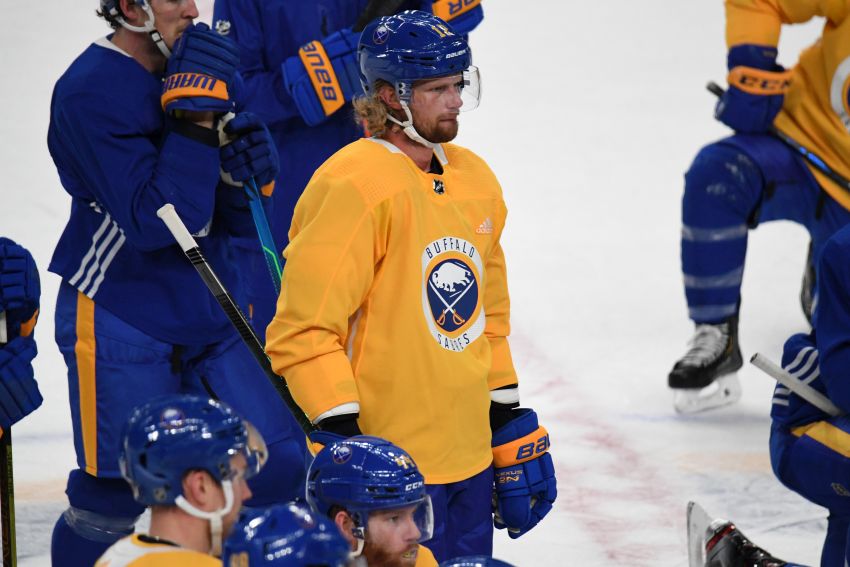 Eric Staal’s accomplishments stand out among the Sabres. ©2021, Micheline Veluvolu

During the six years Jeff Skinner and Eric Staal spent together as teammates with the Carolina Hurricanes, they usually skated on separate lines.

Back then, the Hurricanes were in the midst of a marathon 14-year playoff drought. As one of the NHL’s bottom-feeders, they possessed little depth up front. So the coaches would often play their top scorers on different lines.

“We were pretty thin,” said Staal, who joined Skinner and the Buffalo Sabres in a trade from the Minnesota Wild on Sept. 16. “So if you start loading up one line, it gets a little bit tough to generate and score on other lines. …

They acquired Staal to be their No. 2 center behind Jack Eichel, and through the first two days of training camp at KeyBank Center, he has practiced in that spot between Skinner and Sam Reinhart.

“That’s going to be a high-level threat but will also give Jack’s line, however it evolves, some breathing room,” Sabres coach Ralph Krueger said of Staal’s line on a Zoom call Saturday.

For much of last season, the Sabres relied on Marcus Johansson, a converted winger, to center their second line. Now, in Staal, 36, they have one of the NHL’s most decorated players filling that role.

When was the last time the Sabres had a player with a resume so extensive?

“He’s such a natural leader, such a solid human being,” Krueger said. “So that alone and the experience that he brings with him add extreme value to the group and depth in that role that we were chasing last year.

“The on-ice (talent) is clear for everybody to see even in these skates, how smart of a centerman he is, how he works hard without the puck and with it. He just makes the people with him that he plays with better.”

Perhaps his presence can ignite Skinner, who had been penciled in as Staal’s left winger since they acquired him. Skinner, of course, struggled a year ago in the first season of an eight-year, $72 million contract, scoring only 14 goals in 59 games.

Skinner, who was moved away from Eichel following a 40-goal season, started off well, scoring 11 times in his first 28 contests. Then he suddenly went dark, beginning a career-worst slump. He scored his 12th goal Feb. 22, ending a 28-game drought.

“With a guy who has been around that long, it’s easy to play off of him because you know where he’s going to be,” Skinner said of Staal. “He’s pretty predictable. He wins a lot of battles and he creates a lot of space out there with how big he is and how fast he can play.”

In his 10-year career, Skinner, 28, has often alternated hot and cold, never putting together two consecutive 30-goal seasons. Still, he always bounces back.

“Like a lot of offensive guys, it’s a lot about confidence and feeling good about your game and then getting opportunities to have success,” Staal said on a Zoom call Saturday. “I think within our group and this team, the amount of offensive guys we have, you should get plenty of opportunity and chances to score.

“When he gets his confidence going, you just know that he’s going to score. It’s just like one of those things, a goal scorer, you can just feel when he gets that chance, it’s going to hit the back of the net. … I’m just excited to see what he can do this year.”

This year could become Skinner’s most meaningful NHL season. Right now, having played 720 regular-season games without appearing in the playoffs, Skinner ranks first among active players.

He trails Guy Charron by only 14 games for the all-time record.

“Looking forward to that storyline coming to an end,” said Skinner, whose Sabres haven’t made the postseason since 2011. “Every year, you want to make the playoffs. As you get older, I’m not going to play forever, so obviously the window is closing. Hopefully it’s still got some room there.”

Staal’s varied experience could help the Sabres get over the hump. For years, the Sabres have responded poorly to adversity, often wilting under pressure and allowing things to snowball.

Krueger said Staal could have a calming effect.

“He just has such a calm demeanor and he just has such an honest aura around him,” he said. “In the hard times, I like us to look it in the eyes, communicate like men about the problems and then move forward. …

“Somebody like that will make sure that our mindset stays on the things we can change, on the things we can influence. In all my understanding of who and how Eric Staal functions, he is that. So it’s wonderful to know when the first hard situations evolve that in that room the right things are being said.”