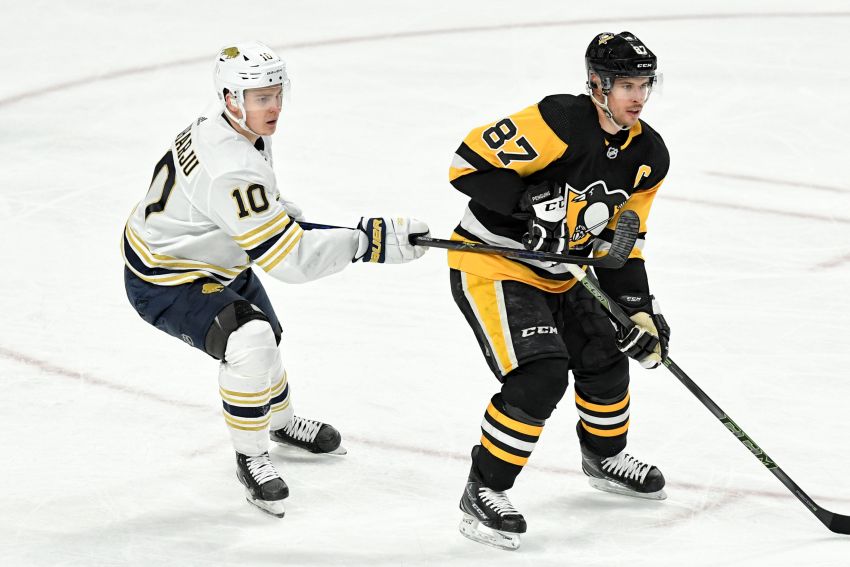 Henri Jokiharju and Sidney Crosby could become familiar this season during the eight meeting between Buffalo and Pittsburgh. ©2020, Micheline Veluvolu

When the Buffalo Sabres open their 2020-21 schedule on Jan. 14 at home against the Washington Capitals, it will start a trend for the abbreviated 56-game season.

The COVID-19 pandemic has forced the NHL to limit travel, meaning teams will be staying in cities for multiple days and playing series against one opponent.

The Sabres’ opener kicks off a two-game set at KeyBank Center. They also host Washington the next night.

Their schedule, which the NHL released Wednesday, features 25 two-game series, including 14 at home.

The back-to-back games, however, have been limited. The Sabres have eight scheduled, including road contests against the Philadelphia Flyers on Jan. 18 and 19.

The NHL had to temporarily realign and make other changes to ensure a season could take place. The U.S.-Canadian border is still closed. The NHL and NHLPA must deal with local and national health municipalities.

Teams are only playing an intradivisional schedule this season. The Sabres face their new East Division opponents eight times each (four at home and on the road).

The Sabres, who haven’t made the playoffs since 2011, have joined a loaded division that features the Capitals, Flyers, Boston Bruins, New Jersey Devils, New York Islanders, New York Rangers and Pittsburgh Penguins.

Every team but the Sabres and Devils made the postseason or qualifying round last season. The Bruins, despite having 12 games canceled, still earned a whopping 100 points.

The new format will almost certainly fuel new rivalries and create more aggression. The teams will be sick of seeing each other by the end of the season.

Captain Jack Eichel and the Sabres play six of their first 16 contests against Alex Ovechkin and the Capitals. So if the Sabres struggle against the perennial heavyweight, it could doom their season early.

The top four teams in each of the four divisions make the playoffs.

The Sabres, coincidentally, played the Capitals in their last game, a 3-2 home shootout win March 9. Three days later, the coronavirus forced the NHL to pause the season.

So assuming the season can start on time – the pandemic keeps wreaking havoc on sports schedules – the Sabres will have gone 311 between playing games.

In May, the NHL canceled the remainder of the regular season and announced the playoffs would be held in two bubbles during the summer.

Some other notable dates, stretches and nuggets from the slate:

– The Sabres close the regular season against Sidney Crosby’s Penguins on May 6 and 8 in Pittsburgh. The schedule stretches 115 days, meaning the Sabres play every 2.1 days.

– According to the Sabres, they’ve only played two-game road sets against one opponent twice in their history: in 1994 versus the Quebec Nordiques and 2006 against the Toronto Maple Leafs.

– Game times will be released later. Fans cannot attend games because of the pandemic.