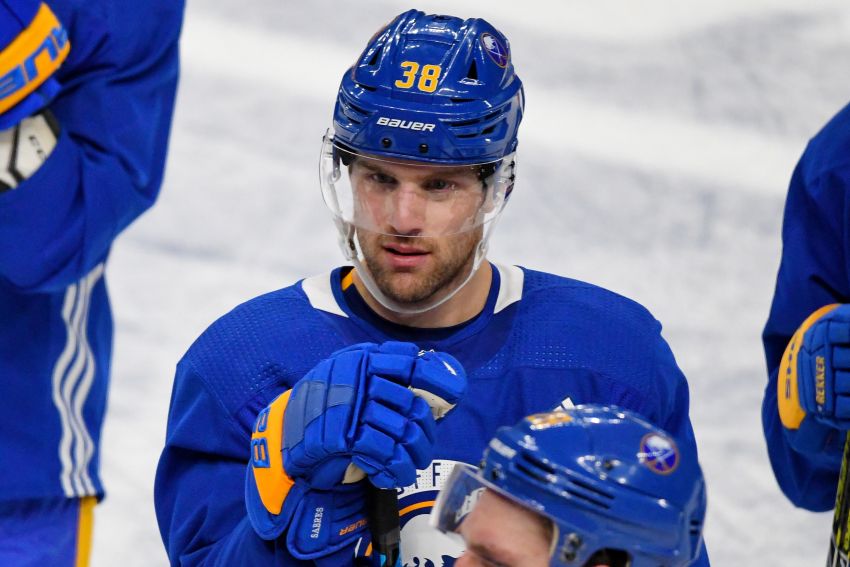 Sabres forward Riley Sheahan grew up about 30 miles from Buffalo in St. Catharines, Ontario, so he has carried what he called a “soft spot” for his new team.

Growing up, Sheahan would make the trip across the border to watch the Sabres or see them when they visited his hometown for training camp.

“I’ll be honest, I was a little bit of a (Toronto Maple) Leafs fan but Sabres tickets were more affordable and a little closer,” Sheahan said on a Zoom call Thursday. “I grew up coming here watching Mike Peca and Dominik Hasek and Chris Drury, Curtis Brown – all those guys. I really enjoyed the Sabres.”

But more than nostalgia drew Sheahan, 29, to Buffalo. Before he signed a professional tryout contract Dec. 29, he spoke to some players and coach Ralph Krueger to learn more about the Sabres.

Sheahan, who knows some of his new teammates, said he liked what he heard about Krueger’s coaching style and “the type of person he is.” When he chatted with Krueger, he said he “loved everything he said.”

“Everything he’s said on the phone has added up to how training camp’s been,” Sheahan said. “It’s just been a great atmosphere here. You feel free playing on the ice, you feel loose, but at the same time, there’s a strategy set in place that holds everyone accountable. It’s been a lot of fun.”

The well-traveled Sheahan has acclimated to the Sabres, his fifth team in four seasons, quickly. Krueger promoted him to the fourth line after Zemgus Girgensons suffered a season-ending hamstring injury in Monday’s scrimmage. For the last two practices, Sheahan has skated at left wing beside center Curtis Lazar and Tage Thompson.

In the coming days, the Sabres could sign Sheahan to a regular contract. They open the season next Thursday against the Washington Capitals at KeyBank Center.

Depth, of course, has been a major issue for the Sabres. The top teams roll four lines. The Sabres need players like Sheahan – Krueger calls them “specialists” – if they want to end their embarrassing nine-year playoff drought.

In their conversation, Krueger explained to Sheahan the respect the Sabres have for players who possess his talents.

“Players that play roles for us that maybe aren’t as sexy for the outside world or aren’t measurable with statistics are extremely important for us to build a winning culture here and the understanding of the game with and without the puck,” Krueger said. “We need players to just do things right. We need pros that can lead by example, whether it’s in practice or then during games. …

“We see him as a role player, as a specialist and as the kind of personality you need in your group to win hockey games.”

Sheahan, a Notre Dame product, acknowledged that role can be difficult. Scoring is usually the easiest to generate confidence. But in a bottom-six role, offensive opportunities are often limited.

“You got to have thick skin,” said Sheahan, who has scored 66 goals in 513 career NHL games. “You’ve got to do the little things right for your team. I think a lot of the times, the teams that are willing to do that have a lot of success. Yeah, sometimes it can be a tough role, but it’s a fun role.”

Sheahan has played that role all over North America. Following more than six seasons in Detroit’s organization, he has bounced around over the last three years, playing for the Pittsburgh Penguins, Florida Panthers and Edmonton Oilers.

“It’s tough sometimes,” Sheahan said changing teams so frequently. “Obviously, stability is nice and sometimes it’s hard to find in this career. But you learn new things everywhere you go and you experience different things and whatnot. I think I’ve sort of found the mindset that’s going to work for me and I’ve been feeling it at camp here.”

Sheahan was traded twice and signed with the Oilers last year shortly before camp started, so he said this offseason “was definitely a different process.” In recent years, as the NHL trends younger, established veterans have often been forced to settle for tryouts and an opportunity to earn a contract.

“There’s a decent amount of good players out there for free agency and a lot of guys searching for jobs,” Sheahan said. “Just the way things were going, it obviously wasn’t ideal. But it’s worked out so far. I’ve been loving it here so far.”

One thought on “Riley Sheahan has ‘soft spot’ for Sabres, sees opportunity in Buffalo”