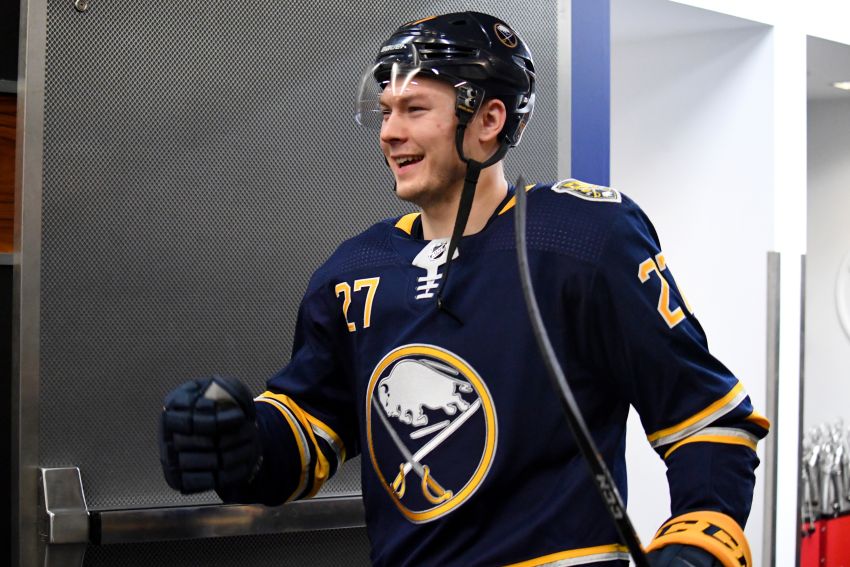 BUFFALO – In the waning minutes of Tuesday’s 4-2 win over the Vegas Golden Knights, Sabres center Curtis Lazar couldn’t get off the ice.

Lazar’s marathon shift began with 2:18 left in the third period and the Sabres clinging to a one-goal lead. Following an icing and a timeout, the play kept going and going as the Golden Knights pressed with the extra attacker.

“We knew what we had to do,” Lazar said following Wednesday’s practice, “and I think it’s kind of hang on.”

As the clocked ticked down, Lazar’s linemates, Kyle Okposo and Evan Rodrigues, managed to change. Lazar, however, was stuck.

So when the puck squirted to a gassed Lazar in the slot above Sabres goalie Linus Ullmark, he quickly backhanded it out of the zone.

“I honestly was just was trying to flip it out to the far blue (line) and got a little more on it,” Lazar said. “Thankfully it went in.”

“That’s kind of how my year’s going. I’ve worked hard for those chances. It’s good to have luck on your side, too.”

After staying on the ice for 1:54, Lazar could celebrate his fourth goal this season and the Sabres’ second straight win.

“I was just praying it wasn’t icing, because I would’ve had to hold for another 30 seconds or so there,” said Lazar, who scored with 24.3 seconds left.

Lazar’s presence on the ice late in a tight game is significant.

Since the Sabres recalled Lazar on Dec. 21, he has enjoyed regular duty, playing 11 straight games entering tonight’s road contest against the Dallas Stars.

Lazar, 24, has quietly become one of Sabres coach Ralph Krueger’s trusted forwards. On Tuesday, he played just over 18 minutes, his highest total since Nov. 25, 2015.

“I know all along in my head that I am an NHL player,” Lazar said. “But it’s a matter of showing that but also getting the opportunity and being utilized in the right place.”

Krueger has utilized Lazar all over the ice, including the faceoff dot, where he won seven of the 12 draws he took Tuesday. Only Sabres captain Jack Eichel took more faceoffs.

Lazar began the season in the AHL and shuttled back and forth between Rochester and Buffalo for nearly three months, playing 17 games with the Americans.

But Lazar, a veteran of 263 NHL games, might’ve secured a regular spot with the Sabres.

The 6-foot, 211-pound Lazar impressed the Sabres from the get-go, nearly making the team out of training camp. He has been the first forward they’ve recalled all season.

Then in December, the Amerks shifted Lazar back to center, his natural position.

“I feel so comfortable down the middle,” said Lazar, who signed a one-year, one-way contract worth $700,000 on July 1. “I think that’s a big part of it, actually playing my natural position. And Ralph put me in spots where I’m able to succeed. I feel comfortable. I really just control the game.”

While Lazar, the 17th overall pick by the Ottawa Senators in 2013, possesses skill, he loves playing heavy hockey.

“The game (Tuesday), that’s my type of hockey, too, right?” Lazar said. “Just (a) hard-nosed battle. I take a lot of pride in that and especially my defensive play. To have the coach’s trust, it means a lot.”

Krueger wants Lazar’s line to match up against some of the opposition’s best.

“He has that opportunity to be the leader of a line that is hard to play against but can also defend against top lines of the other team,” Krueger said. “So that can release some of the ice time of our top lines, especially here at home, to free them up, to play against possibly weaker lines of the opposition.

“And Curtis is giving us that. He’s working hard on his faceoffs. He gives us a powerful right-handed draw opportunity, and he’s learning every day better to play within our defensive structure we want and our principles and concepts we need.”

Lazar broke into the NHL in 2014-15 and played regularly for three seasons with Ottawa and the Calgary Flames.

When the Flames sent Lazar to the Stockton Heat last season, he embraced the opportunity.

“Last year was big kind of taking that step back and playing in the American League,” said Lazar, who scored 20 goals in 57 games. “But the game’s starting to slow down for me. I understand the game. …

Lazar has scored at every level except the NHL. Two seasons ago, he mustered only two goals and 12 points in 62 games with the Flames.

But Lazar believes he can develop into a 15- or 20-goal scorer someday. Having scored three goals in his last eight outings, he has shown signs of breaking out offensively. He also registered two assists in Sunday’s 5-1 road win over the Detroit Red Wings.

“I’ve always established that defensive game first to build that trust and get that ice time and then build on the offense,” said Lazar, who has compiled seven points in 17 NHL appearances this season. “It’s nice to (be) put in there and be relied upon in all situations.”

Listen to this week’s “Behind the Bench,” my analysis of the #Sabres w/@WBFOmar on @WBFO, 88.7:https://t.co/hTpofspLwg

One thought on “Curtis Lazar earning keep with Sabres: ‘I am an NHL player’”